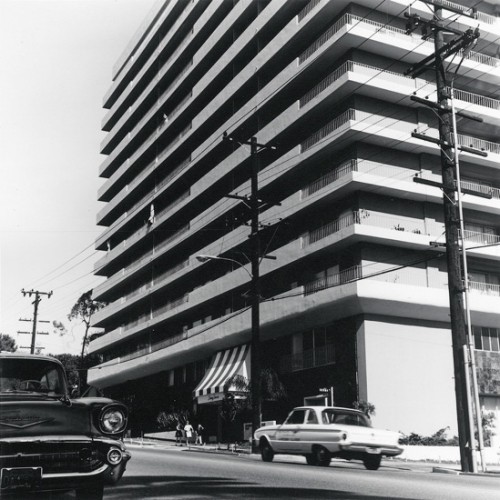 Ed Ruscha
Apartments, Parking Lots, Palm Trees and Others:
Films, Photographs and Drawings from 1961 to 1975

Monika Sprüth and Philomene Magers are pleased to present an exhibition of work by Ed Ruscha in Berlin, featuring early photographs, drawings as well as two filmic works.

Since the early 1960s, Ed Ruscha has created an extensive painterly, graphical, and photographic oeuvre. Ruscha first considered working as a graphic artist but soon developed a deep passion for painting and photography. Inspired by the American photography of the 1940s and 1950s, Ruscha developed an independent conceptual approach which is manifested in the sixteen photo-books, created between 1963 and 1978, in which he offered a fresh interpretation of the idea of the artist's book. These small, unpretentious books, which Ruscha always issued in a limited edition, anticipated with their titles in a laconic manner the entire contents of the books, for example Twentysix Gasoline Stations (1963); Various Small Fires and Milk (1964); Some Los Angeles Apartments (1965); Every Building on the Sunset Strip (1966) as well as Thirtyfour Parking Lots in Los Angeles (1967) or Nine Swimmingpools and a Broken Glass (1968). They show how Ruscha broke away from the traditions of the genre and simultaneously distanced himself from the subjectivist, analytical photo-books of such author-photographers as Robert Frank and Walker Evans. Coming to the fore here, instead of pictorial sequences ordered according to formal and contentual critiera, was a serial arrangement in which the disregard of classical conventions of photography, namely the requirements of perspective and composition, became a characteristic of his photographic aesthetic. Ruscha's pictures map out the redundant appearance of the West Coast civilization of the USA through the monotony and repetitiveness of the series.

Although Ed Ruscha considers himself to be a painter and draftsman rather than a photographer, in 1999 he issued thirty motifs from his artist book Thirtyfour Parking Lots (1967/1999). His procedure of selection for the re-edited photographs was intuitive. He described it in this way: ‘Originally, I thought that the pictures were a means to an end, a vehicle to make a book. And then along the way there was some gear shifting. Over the years, I began to appreciate print quality and see my photographs as not necessarily reproductions for a book, but as having their own life as silver gelatin prints.‘(*) The exhibition presents works which are characteristic of Ruscha's photographic oeuvre, and which arose in the context of the artist-books but are not necessarily a part of them. For example, the black silhouette of the palm tree, which originally adorned the main motif of the artist-book entitled A Few Palm Trees (1971), was later featured as an autonomous photograph in the series Palm Trees (1971/2003). Furthermore, Ruscha combined a selection of ‘outtakes‘ into the portfolio Real Estate Opportunities (1970/2003), which brings together photographs of unattractive building sites with subtle irony.

Equally characteristic for Ruscha's aesthetic are the pictures of unfrequented sections of streets in the Roof Top Views (1961/2003), which suggest an arbitrary selection of images. Works such as the completely deserted views of the stereotypical architecture of Apartment Houses (1965/2003) convey, through both a formal and technical nonchalance as well as through their distanced perspective, a sharp break with the viewing habits of the time.
The apartment buildings, which are typical of Los Angeles and are photographed from an extremely slanted angle, are also reminiscent of the experimental perspective of the Russian Formalists. With these photographs, Ruscha clarified his point of view with regard to photography: ‘Drawings would never express the idea - I like facts, facts, facts are in these books. The closest representation to an apartment house in Some Los Angeles Apartments is a photograph, nothing else, not a drawing, because that becomes somebody else’s vision of what it is, and this is the camera’s eye, the closest delineation of that subject.’(**) But he contradicted this particular statement by creating in the same year several graphite drawings on the basis of these photographs, precisely because a personal interpretation of this theme was interesting for him. Here the studies, reduced to their semiotic character and based on concrete geographical models, such as Study for Doheny Drive Apartment Building (1965) and Study for St. Tropez Apartment Building (1965), make it clear how much Ruscha uses both media in his oeuvre, and the manner in which they exercise a mutual influence on each other.

The interpenetration of the various genres becomes especially apparent in his only film works Premium (1971) and Miracle (1975). Proceeding from a short story by Mason Willians entitled How to Derive the Maximum Enjoyment from Crackers (1964), Ruscha arranged in Premium a scenario which he first projected in his photo-book Crackers from 1969 and subsequently transformed into a film. Miracle contains the essence of the artist's same-named painting, inasmuch as the story is told of a strange day in the life of an auto mechanic.

Ed Ruscha was born in 1937 in Omaha, Nebraska; he lives and works in Los Angeles. In 2005 Ruscha represented the United States of America at the 51st Venice Biennale; in September 2006, Ruscha was awarded the cultural prize of the Deutsche Gesellschaft für Photographie (DGPh, ‘German Society for Photography’).

Important solo exhibitions have included Cotton Puffs, Q-tips®, Smoke and Mirrors: The Drawings of Ed Ruscha at the Museum of Contemporary Art in Los Angeles in 2004, which was subsequently exhibited at the National Gallery of Art in Washington, D.C. Furthermore, during the same year the Whitney Museum initiated the exhibition Ed Ruscha and Photography. Likewise in 2004, the Museum of Contemporary Art in Sydney presented an exhibition with a selection of Ruscha's photographs as well as paintings, drawings, and artist-books, which was subseqently shown at the Museo Nazionale delle Arti del XXI Secolo in Rome, as well as at the Scottish National Gallery of Modern Art in Edinburgh. A further exhibition of Ruscha's photographs entitled Ed Ruscha and Photography was mounted in 2006 by the Jeu de Paume in Paris, the Kunsthaus Zürich and the Museum Ludwig in Cologne. In 2009 the Hayward Gallery in London organized what is certainly the most comprehensive retrospective of Ruscha's paintings up to now with the exhibition Fifty Years of Painting, which after the Haus der Kunst in Munich may currently be seen until the beginning of September at its final station, the Moderna Museet in Stockholm.