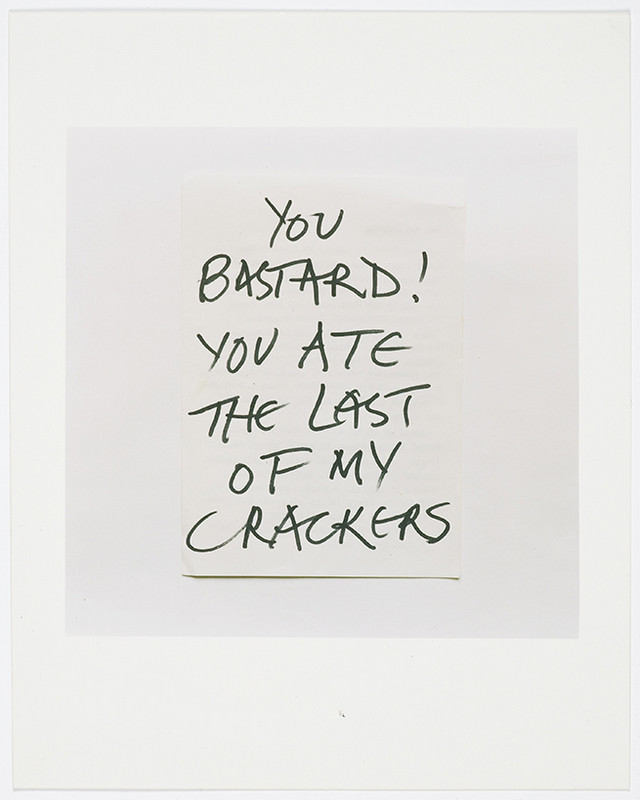 Caption:
Keith Arnatt
Notes from Jo, 1991-95,
Colour photograph
25,4 x 20,3 cm
Copyright Keith Arnatt Estate
Courtesy Keith Arnatt Estate / Fine Art Partners / Sprüth Magers Berlin London
Keith Arnatt
Notes
14/09/ - 02/11/2013
Monika Sprüth and Philomene Magers are pleased to present an exhibition of work by British artist
Keith Arnatt (1930 – 2008) in Berlin, in the artist’s first solo presentation with Sprüth Magers. The
exhibition will showcase photographs from the artist’s series Notes from Jo (1991-1995), in which
Arnatt photographed personal notes and domestic reminders written to him by his late wife. Also on
display will be work from the series Labels Borrowed/Stolen (1993-1995), featuring photographs of
labels and signs taken from local shops.
Keith Arnatt was one of the UK’s leading artists during the emergence of conceptual art in the
1960’s and 1970’s. His work from this period explores the range of possibilities of meaning and
function within art, as well as considering how the perception of an artwork operates in relation to
the act of creating a work. The artist’s extensive use of photography during this time was mainly to
record works whose physicality was connected to specific contexts. From 1973, Arnatt began to
develop a growing interest in the camera as an instrument for art making, adopting the camera as
his primary tool for producing art rather than simply documenting it. The artist’s subsequent
photographic series underscore his analytic method of working, and reveal an observational style
influenced by his awareness of the typological preoccupations of artists and photographers such as
Bernd and Hilla Becher.
The exhibition at Sprüth Magers focuses on the series Notes from Jo, in which Arnatt collected and
photographed the hand-written messages that his wife Jo left him around the house. Ranging from
the mundane to the angry, the instructions reveal the beauty, intimacy and humour of domestic life.
Arnatt’s preservation of these notes through photographic documentation underlines the artist’s
distinctive skill of being able to discern the visual and conceptual possibilities of objects and
remnants from daily life. Taken out of context and blown up they become surreal, showing Arnatt’s
understanding that observation could be transformed by the act of isolation. The interest in
language recalls Arnatt’s earlier conceptual text pieces, and marks a continued investigation of the
use of text in image making, playing with how meaning slips from the conceptual to the visual, from
the intellectual to the emotional.
Labels Borrowed/Stolen is a body of work that the artist created in the same period as Notes from
Jo. Arnatt took everyday labels and signs from local shops photographing them as objects in his
makeshift studio.
The works on show in the exhibition also stand as studies in colour and line. The artist worked first
in black and white photography, changing to colour in the mid 1980’s. The images within Notes from
Jo are rendered in colour and composed in a spare, frontal, documentary style. The artist’s sharp
eye for specifically pictorial effects can be seen in the red ink of ARCHIE’S GRUB, which collides
vividly with the flash of green lining of the envelope on which the words have been scribbled, as well
as in the dabbled green effect of the smudged black ink in ME, RING DENTIST.
Keith Arnatt was born in Oxford, UK in 1930. He died in Wales in 2008. Major solo exhibitions
include Whitechapel Art Gallery, London (1977), Arnolfini Gallery, Bristol (1986), The
Photographers’ Gallery, London (1989, 2007), CAYC (Centro de Arte y Comunicación), Buenos
Aires (1992), XXI Bienal de São Paulo, São Paulo (1991), Henry Moore Institute, Leeds (2009),
Tate Britain, London (2013).
Major group exhibitions include Seattle Art Museum, Seattle (1969), Camden Arts Centre, London
(1969), Tate Gallery, London (1972), Hayward Gallery, London (1972), Museum of Modern Art, New
York (1970), Vancouver Art Gallery, Vancouver (1970), Barbican Art Gallery, London (1990),
Whitechapel Art Gallery, London (2001), Tate Britain, London (2002), Fundació Joan Miró, Centre
d’Estudis d’Art Contemporani, Barcelona (2003), Kunsthalle Düsseldorf (2004), Kunstmuseum
Bern, Bern (2006), Kunstmuseum Bern (2006), Tate Britain (2007), MoMA PS1 Contemporary Art
Center, New York (2009), Royal Academy of Arts, London (2011), Henry Moore Institute, Leeds
(2011), MOCA, Los Angeles (2012).
At the same time, Sprüth Magers Berlin is showing the solo exhibition Storyboard (in 4 Parts) by
John Baldessari.
www.spruethmagers.com