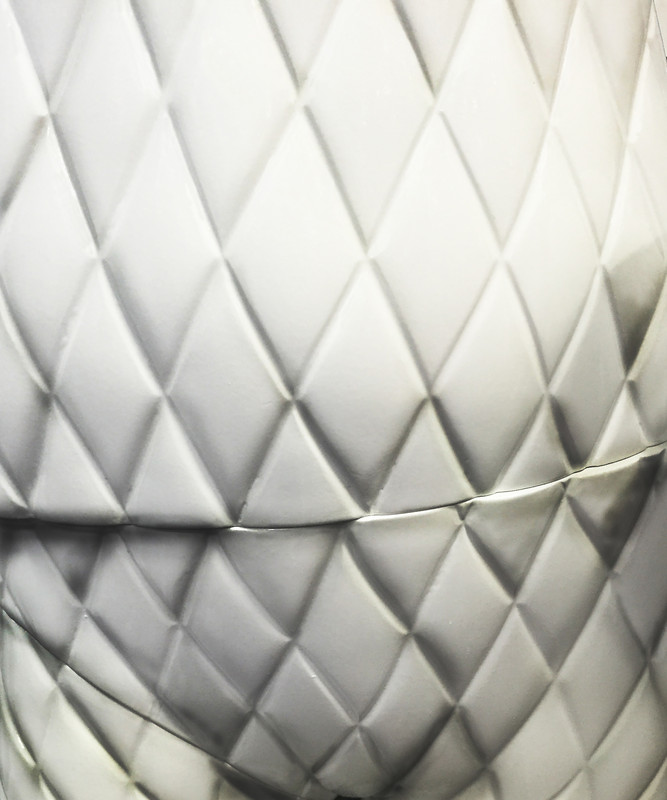 The formal manifestations of their work are as varied as the concepts behind them, and yet Louisa Clement, Anna Vogel and Moritz Wegwerth have one thing in common: they are among the first students Andreas Gursky admitted into his fine art class at the Kunstakademie Düsseldorf in 2010. The interdisciplinary structure of the class (students work with photography along with diverse media including painting, sculpture, video, performance) is a constant challenge to broaden one’s own horizons. Two approaches appear central to Gursky’s teaching: first, that he encourages his students to delve intensively into the history of their respective medium; second, he motivates them to work with current social circumstances. These factors also play an important role in the three artists’ works.

The early, 22-part photo series On One’s Way (2013) by Louisa Clement (b. 1987), bundles unusual visual experiences from various train rides spread out over the course of a year. The things that caught her photographic attention were places and spaces that would normally elude practical perception: the sliding mechanism on the door, for example, the ventilation grid and armrest. Clement photographs with a smartphone, which plays an important part of her aesthetic. The same is true of her 2015 series Heads, for which the artist photographed mannequin heads through the store
windows of fashion shops. She only chose mannequins whose heads had no facial features, so the longer we look at those empty faces, the more we imagine certain characters. Clement’s heads provide ample opportunity for creative projection.

With the series Fractures (2016), the artist delves once again into the world of display windows. As with Heads, all of the images feature a background with color taken from the original environment. For Clement, the isolated body fragments serve as a metaphor for the everyday search for identity. In this sense, it is only logical that she titled her most recent series Avatar (2016). In a world of social media and virtual reality, the age-old longing to be someone else is closer to fulfillment than ever before.

Anna Vogel (b. 1981) deconstructs the traditional photographic realm in her work. A number of her photographs have been sliced with a cutter and painted over with lacquer and acrylics. In Translator III and IV (2016), she has omitted the photographic image completely. The light-to-dark gradient backgrounds are computer generated, and then drawn over using specially made stencils — a painstaking and also meditative working process. The photo paper acts as an indicator of photography; it gives the work the character of a technical image. Another narrative strand appears in technical objects that the artist has taken to her studio and edited on the computer. Tinted Transformer III or Protection I and II (2016) show subjects from the field of motor racing. The scrubbed environment and objects themselves appear almost flawless.
With Groundblast (2016), we get an idea of what is happening on this side of the world’s user interfaces. The image of a chimney detonation is largely isolated from elements related to its location and conjures associations with current war scenarios. The warships in Salto di Quirra I and II (2015), which superficially recall Romantic imagery, in fact refer to an environmental scandal caused by weapons testing in a restricted military zone. Nearby residents of the eponymous place in Sardinia have suffered under these tests for decades.

Moritz Wegwerth (b. 1981) studies details of the world with an eye for the seemingly negligible. The artist has created a digital archive on the history of photography that includes some 50 protagonists from Eugène Atget to Annette Kelm — a constant touchstone for his own activity. He uses it to question each new work and its claim to validity in a contemporary context. His interest lies in individual images, not series. The work Gamescom II (2016) shows participants in the world’s biggest video game show in almost total darkness, waiting to be let in. The representational context appears
extremely minimal, so that at first glance a viewer might believe they are looking at a kind of black-red ornament. It is only on closer inspection that we see the precisely balanced ratio of crowd density and spatial depth that characterizes the work.
In Ultramarine (2016), the focus is on the blue reflection of the water-filled rain gutter that cuts vertically across the snapshot image. A lightning rod mounted on the flat roof forms a strange curve with no technical justification, except for the inimitable obstinacy of the workman who put it there. In this respect, the work also reflects the artist’s own, subtle sense of humor. Wegwerth visited Sabbathday Lake Shaker Village, a settlement for members of the Shaker faith community, as part of a fellowship program at the Skowhegan School of Painting & Sculpture in Maine. He struck up a conversation with Brother Arnold Hadd, one of the last active Shakers, who invited him to live and work in the village for a week. This encounter led to the large-format work Shaker Trees (2016) — a reminiscent look at the remote location, but also much more of a monument, or tribute, to the open countryside. Again, the artist has made only minimal changes, in this case by converting the image to black and white.

The idea that photography has the ability to represent perception and experience plays an important role in the work of Louisa Clement, Anna Vogel and Moritz Wegwerth. All of them build on a tradition that emerged from their study of photography as a medium. The perception of an artwork is not understood as a passive act to be taken for granted, but rather as a product of cultural and historical circumstances.

The exhibition is being held as part of the EMOP Berlin – European Month of Photography 2016.
The Berlin gallery is concurrently presenting the solo exhibition THE JUNGLE by Sterling Ruby.