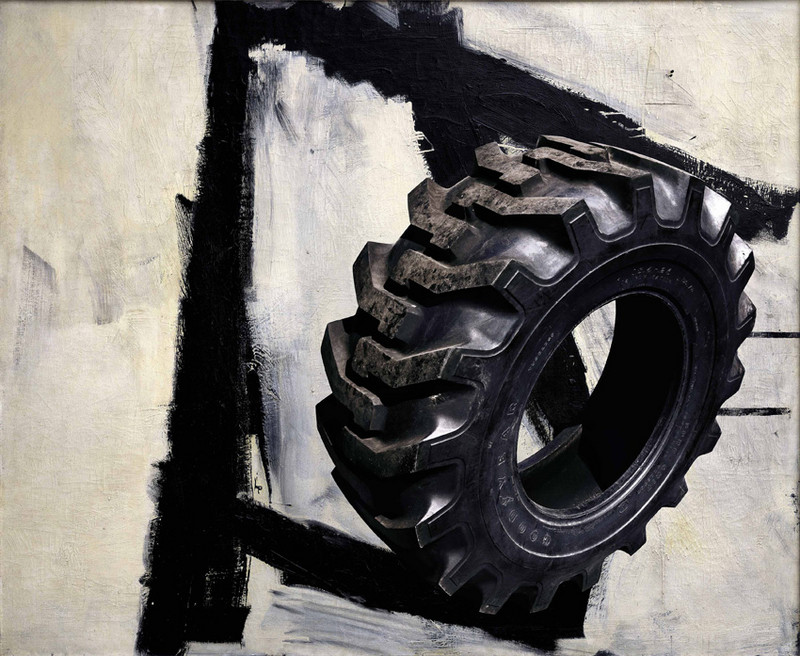 Nina Pohl
Cone Head, 2012
Diasec
© Nina Pohl, courtesy Sprüth Magers Berlin London
Nina Pohl
New Paintings
09/11/12 - 12/01/13
Art history has assigned exactly two functions to photography in its relationship to painting. The first
has been to take over the accurate representation of objects, landscapes, and persons and thereby
to free painting for taking on the "higher tasks" (Wolfgang Kemp) which have been realized through
the "-isms" since the end of the nineteenth century. The second has been to provide images which
could be used by painters as models for their work and which, in the process of painting, underwent
a transformation and revaluation into works of art.
Nina Pohl's New Paintings are photographic images which not only reverse this traditional
relationship, but also reevaluate it in a pointed manner. It is painting which here provides the initial
models, above all the painting of Art Informel or Abstraction as the scene of an ostentatious working
on the picture: brushstrokes and layers of paint, contours and textures, pastose application and
palimpsest-like markings, which Pohl completely or fragmentarily records and presents in significant
enlargement. In this way, that which was abstract (and to some extent already large-formatted) —
works by Franz Kline, Josef Albers, Joan Mitchell, et al. — is extended further in its twodimensionality,
rendered unbounded as an image, and thereby closely scrutinized, as if in this
project the primary task of photography consisted of scanning the surfaces of paintings in order to
register them in an inventory.
In many ways, this constellation is reminiscent of Antonioni's film Blow Up (UK 1966) which, in a
sequence that has since become legendary, staged the process of an enlarging contemplation as a
technique for the dissolving of representations into surfaces and as a transformation of motifs into
markings. In the familiar, proto-criminological plot of Blow Up, there remains, after the enlargement
of what was once a motif, not much more than points and patterns — a spectacle of another sort in
which, above all, the materiality of the image is brought to light. With Antonioni, it is the materiality of
the photographic image; with Pohl, it is the materiality of the painted image, which in the New
Paintings comes to the fore scarcely less distinctly than in Pohl's Ohne Titel ("Untitled") from the
years 2004 to 2006, pictures which transform a series of historical sea-pieces into landscapes of the
second degree, complete with reliefs, gradations of color, and incidences of light through which the
surface attains its own plasticity. (What is less well-known but relevant with respect to the New
Paintings is the fact that one theme of Blow Up is also the competitive relationship between painting
and photography, in strict accordance with the traditional rules which have always granted superior
status to painting and devalued photography into a technical procedure for producing pictures. The
painted image which is thereby juxtaposed with the pictures of the photographer is an ensemble of black and white strokes which bears striking resemblance to some of the models for the New
Paintings.
But instead of simply creating enlarged reproductions of the pictorial segments, in Pohl's new series
something is always added to the works of abstract painting, namely a consistently figural aspect, i.
e. bodies (often of animals) and objects which appear in front of or between the lines and markings,
are literally inserted into the picture, and obstruct the view onto the abstract scenario. By blocking it,
they shift it from the register of the gaze feeling its way across the depicted surface into that of a
projective view which transforms the two-dimensional arrangement into three-dimensionality and
makes it possible to imagine a pictorial depth where previously there was none, which causes
bodies to enter into spaces that otherwise would present themselves as flat surfaces.
The encounter between thorough abstraction and thorough objecthood, such as is initiated by Nina
Pohl in the New Paintings, actually achieves a double effect. Arising along with the idea of the (new)
spatial depth is also a notion of drama, an allusion which remains vaguely formulated yet has a
sufficiently evocative impact. The colorful bird in front of the variegated surface of the picture: Has it
dissolved or devastated this surface, is the bird absorbed by it or does it in fact emerge out of the
surface? The tire in front of the wide, black lines: Will it erase or retrace these lines, did it cause
them, or does it inscribe other markings into the picture? The "slaves" that are slowly dragging a
tetragonal block toward the middle of Quadrophenia: Are they about to consolidate the pictorial
structure, or will they contribute their part to the destruction of the existing composition of
interconnected squares? In one way or another, this re-entry of objective elements into the abstract
ensemble is characterized by an aspect of strife and potential destruction which maintains an
uncertainty with regard to the consequences for the pictorial structure.
Viewed in this way, this series interweaves two principles which are generally considered to be
irreconcilable. On the one hand, the copying mode, the technical reproduction, which presents itself
as an inventory-taking of the (painted) surface. On the other hand, the addition, the intervention, by
means of which the surface is brought into contact with a foreign body that in no way belongs to it. If
one were inclined to summarize succinctly this highly individual technique of the appropriation of arthistorical
contents, then one could say that, in her New Paintings, Pohl leaves the pictorial surface
untouched, and simultaneously occupies it anew in an intervention which has suspended its effects
and, in an emphatically photographic manner, has established the state of no longer / not yet in
perpetuity.
Stefanie Diekmann
Sprüth Magers Berlin will also be concurrently presenting the group exhibition Malerei der 80er
Jahre curated by Albert Oehlen.
www.spruethmagers.com