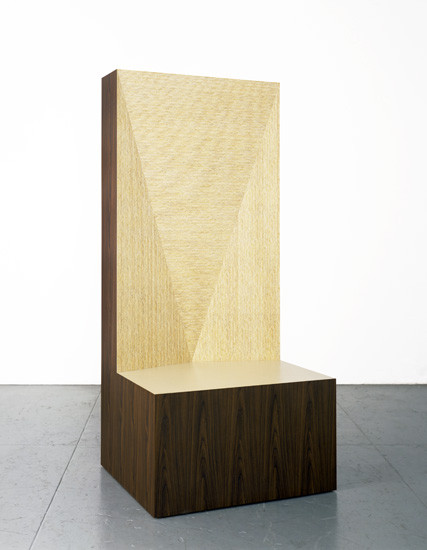 Sprüth Magers Berlin is delighted to present an exhibition of new works by American artist Richard Artschwager. Extending the strategies he has deployed since the 1960s to challenge assumptions about perception and the aesthetic, material and spatial experience of art and the everyday, the paintings and sculptures assembled provide an ideal introduction to the range within Artschwager’s practice, and the unity of philosophical enquiry which binds these diverse works together. Artschwager’s work is typically characterised by playful and provocative slippages between different media. This exhibition encompasses sculptures defined as much by colouration and their painterly elements as they are by their forms and materials, together with paintings which rely on texture and surface to acquire meaning.

Artschwager’s sculptural practice, epitomised by his iconic Table with Pink Table Cloth (1964), addresses the shapes created and spaces defined by familiar, often domestic objects, and investigates the viewer’s experience of them through material incongruities and unexpected interventions of line and colour. Simple blocks of wood and Formica evoke the elemental forms of objects like tables, chairs or pianos, yet the perception of depth and surface is delineated and disrupted in intriguing ways. Where one expects to find empty space under a table, the viewer finds instead the differently coloured planes painted onto the side of a rectangular block. Similarly, the distorted scale of a chair forces the viewer to look newly askance at such an everyday object. These works, recently realized for the first time from sketches done in the 1960s, might be sculptures that have been painted on, paintings installed on a three-dimensional supporting structure, or both simultaneously. This teasing ambiguity points to Artschwager’s concern to explore the tensions and contradictions inherent in the task of grasping and defining familiar objects and experiences, which is an abiding motif in his work.

Three Splatter Chairs, constructed again from Formica and wood, are installed in the corners of the gallery space. They simultaneously assert a claim to occupy three-dimensional space by reaching across two adjacent walls within the gallery space, yet also declare themselves to be surface-based works, appearing like a hinged and abstract representation of a squashed chair. The viewer’s impression and definition of the artwork as one that exists in space or against a plane surface depends on the viewer’s perspective and standpoint, and that this sensory dilemma is evoked through something as banal as a chair suggests that for Artschwager the act of looking entails an essential complexity and subjectivity that also exists outside the gallery.

The dynamic relationship between pictorial representation and sculptural practices in Artschwager’s work is also evident in his paintings. Applying the traditional media of artists’ painting, including charcoals, acrylics, pastels and paints, to roughly textured and fibrous surfaces made from Celotex, his paintings might be said to fall easily into categories from within the canon of art history, such as still life or landscape. However, the disconcerting perspectives and scales deployed in their composition give them a dissonance and internal disorientation that upsets such generic reassurances. The Grisaille techniques deployed also work to invoke a photorealist aesthetic, which threatens to seduce the viewer into apprehending a non-subjective, and more object-like way of approaching of the scenes on view.

Artschwager’s work continually prompts questions about things as they appear and things as they are, between expectations of experience and the lived reality of the world we encounter. Engaging with ideas of ontology, epistemology and aesthetics, his work is nonetheless an experience, by turns delicate, vibrant, humourous and imposing.

Richard Artschwager was born in 1923 in Washington D.C. He first studied chemistry, biology, and mathematics at Cornell University, and then informal art studies under Amedée Ozenfant. In the early 1950s he became involved in cabinet-making, producing simple pieces of furniture. After a ruinous workshop fire at the end of the decade, he began making sculpture using leftover industrial materials, then followed with paintings, drawings, site-specific installation, and photographic-based work. His first exhibition took place at the Art Directions Gallery, New York in 1959. His work has been the subject of many important surveys, including the Whitney Museum of American Art, New York; Centre Pompidou, Paris; Deutsche Guggenheim, Berlin; and Kunstmuseum Winterthur and is included in many museum collections worldwide, including the Museum of Modern Art, New York; the Art Institute of Chicago; Museum Ludwig Cologne; and Fondation Cartier, Paris.

Sprüth Magers Berlin will also be concurrently presenting Robert Therrien’s ‘Works on paper’ and works by Robert Elfgen in ‘Grenzübergang’.