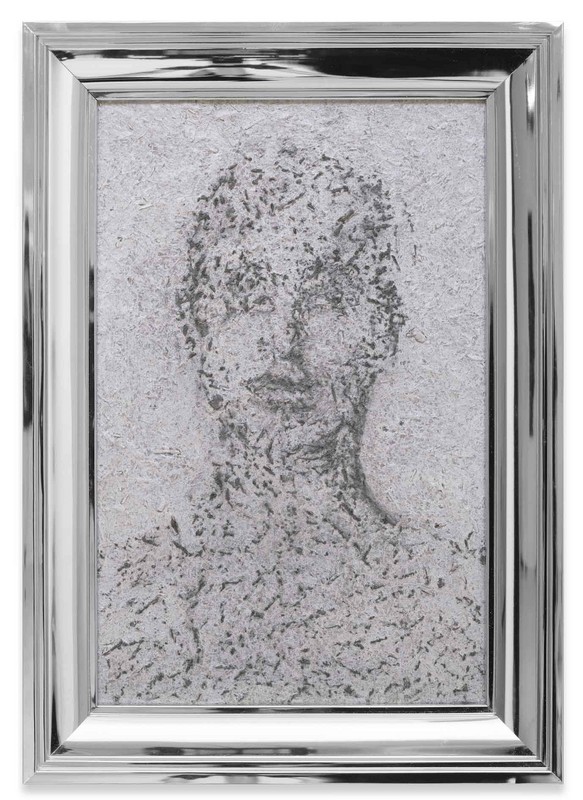 Richard Artschwager
Was Me, 2008
Charcoal, acrylic on handmade paper on Celotex
53,3 x 35,9 cm (framed)
MSPM RAR 20470
Copyright Richard Artschwager / VG Bild-Kunst, Bonn 2013
Courtesy of the artist, Gagosian Gallery and Sprüth Magers
Berlin London
Richard Artschwager
Portraits!
27/04/13 – 22/06/13
Monika Sprüth and Philomene Magers are delighted to present an exhibition of works by the American artist
Richard Artschwager. The show, which was on display at the London gallery of Sprüth Magers from February
to March, focuses on the sculpture Exclamation Point (Orange) (2010), which is exhibited alongside a recent
series of portraits, which also includes the artist's latest works.
One of the most important artists to emerge during the twentieth century, Artschwager’s playful and diverse
oeuvre has influenced generations of younger artists by challenging assumptions about perception and the
aesthetic, material and spatial experience of art and the everyday. Spanning over forty years, Artschwager’s
practice explored the mediums of sculpture, painting and drawing in order to understand the relationship
between art and objects, and the environment they inhabit.
Artschwager’s work is typically characterized by playful and provocative slippages between different media,
conflating the visual world of images, which can be perceived but not physically grasped, and the tactile world
of objects. This dynamic relationship between pictorial representation and sculptural practices in the artist’s
work is evident in his paintings, which are the focus of the exhibition. While his sculptures are likewise defined
by coloration and their painterly elements as well as by their forms and materials, Artschwager’s paintings are
contextually and formalistically based on the elements of texture and surface. Artschwager applied traditional
artists media including charcoals, acrylics, pastels and paints, to Celotex, a rigid compound board formed from
pressed fibers and generally used in construction. Although it has a smooth side, Artschwager executed the
image on the texture’s reverse, exploiting the rough surface as an active participant that is essential to the
work’s imagery, expression and meaning, and animates the pictorial surface. Artschwager bordered the
portraits with heavy, wooden or mirrored frames, propelling his paintings further into the three-dimensional
realm.
Artschwager rarely painted from real life, constructing imagery instead from memory, or using photographs and
newspaper images enlarged to the size of easel paintings as the basis of his work, as in Generation IV, (2003).
The magnification of the photographs, combined with the highly textured surfaces, cause the images to appear
grainy and blurred, rendering the characters unrecognizable, yet retaining a heavy, sculptural effect. The
grisaille techniques deployed in portraits such as Was me (2008) and Sixty + (2008) also work to invoke a
photorealist aesthetic, prompting a non-subjective, and more object-like way of approaching the painting and
the figure depicted. In other paintings, Artschwager incorporates vivid colours, as seen in Mr. Bridge (2009),
featuring a deep purple backdrop which lends a surreal, dreamlike environment to the composition. Similarly,
Group Portrait (2012), is executed in pink and yellow, and features a staged arrangement of static characters in
an imagined situation.
Artschwager used the form of portraiture to explore and understand the human condition. While the theme of
domesticity runs through the artist’s work, evident in Artschwager’s early forms which appropriate domestic
objects such as tables, chairs, lecterns and mirrors, the portraits on show reveal a shift in focus from the interior
of the domestic space, to the interiority of people. The disconcerting perspectives and scales deployed in these
compositions give the work a dissonance. In Self Portrait with Green Background, (2009) the figure seems
energized by the rich green background, a colour of renewal, yet a sense of melancholy pervades the image,
the face appearing empty and grey. The haziness of the image functions as a mask, a means to maintain
distance, and infuse the grisaille paintings with ambiguity.
Also on display in the gallery will be Exclamation Point (Orange) (2010), a sculptural punctuation mark
rendered from plastic bristles attached to a mahogany core. In both name and form, Exclamation Point is a
playful example of the artist's semiotic experimentation in the realm of art. Aesthetically, the exclamation point
was one of Artschwager’s favoured punctuation marks; “I would call this the "prince of punctuation". Spiralling
free but gravity-aware. Hopping on one foot like Mother Brown. Can operate with respect to itself or
anybody/thing around"i.
Richard Artschwager was born in 1923 in Washington D.C. and died in 2013 in Albany, USA. He first studied
chemistry, biology, and mathematics at Cornell University, and then informal art studies under Amedée
Ozenfant. In the early 1950s he became involved in cabinet-making, producing simple pieces of custom made
furniture. After a ruinous workshop fire at the end of the decade, he began making sculpture using leftover
industrial materials, then followed with paintings, drawings, site-specific installation, and photographic-based
work. His first exhibition took place at the Art Directions Gallery, New York in 1959. His work has been the
subject of many important surveys, including the Centre Pompidou, Paris (1984); Deutsche Guggenheim, New
York (1966); Kunstmuseum Winterthur in Switzerland (2003), and the Whitney Museum of American Art, New
York (2012). It is also represented in many museum collections worldwide, including the Tate in London; the
Museum of Modern Art, New York; the Art Institute of Chicago; Museum Ludwig Cologne; and Fondation
Cartier, Paris.
Sprüth Magers Berlin will also be presenting solo exhibitions by George Condo & Joseph Kosuth at the same
time.
www.spruethmagers.com