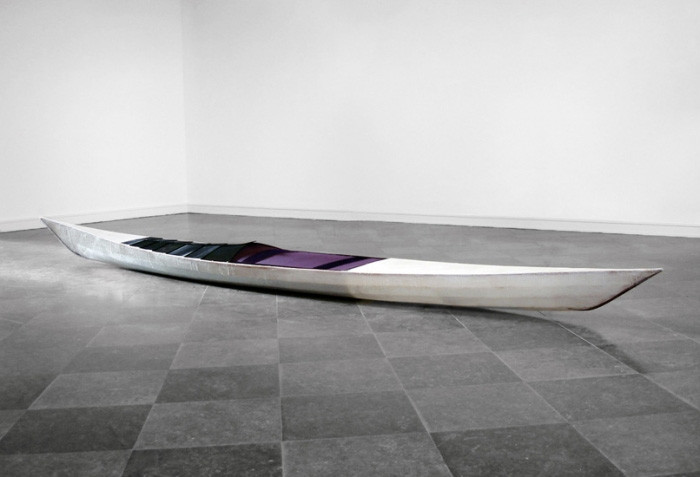 Sprüth Magers Berlin is delighted to present ‘Grenzübergang’ (Boarder crossing), a new installation work by German artist Robert Elfgen. Continuing his longstanding interest in making up and exploring fictitious places, Elfgen’s new work begins with the premise of a silent passage. The space of the passage and the narrative associated with it are delineated by a number of found and made objects in a variety of media. A boat, and a range of other images and objects which are dramatically illuminated, engage with the specific environment of the gallery space, and evoke an intriguing and ambiguous sense of place, a site that might be defined either by abandonment, or by the potential of rediscovery.

Elfgen’s interest in places – made up, discovered, looked for – is intimately associated in his practice with a fascination with travel, journeys, and the means to get there. Throughout his work he has built vehicles, including boats, rafts, cars, buses and a star fighters, some of which function, others of which are ornamental and are divested of utility. More than merely suggesting the practical experience of travel, however, his art is more concerned with the creative power of travel and movement, and how voyages become opportunities to experience and construct new and possible worlds.

Born in 1972, Robert Elfgen studied at art academies in Braunschweig with John Armleder and in Düsseldorf with Rosemarie Trockel. His work has been presented in solo exhibitions at the Kulturzentrum Antwerp in 1999, Kunstverein Bonn (‘1+1=3 Elfgen Technik’), 2005, and Westlondonprojects, London, in 2006. He will also be presenting a solo exhibition with Marianne Boesky in New York in May 2009. Group exhibitions include ‘The Class of Rosemarie Trockel’ at the Kunstverein Gelsenkirchen, 2002, and ‘The class of Lieber Friedrich’ at the Kunstverein Kassel, 2006. He also collaborated with Kai Althoff, the works were then shown at the ZKM Karlsruhe in 2007 and Sammlung Falckenberg, Hamburg, in 2008. He has been represented by Sprüth Magers Berlin London since 2004 and was awarded the Junger Kunstpreis, NRW (Nordrhein-Westfalen) in 2008. He lives and works in Cologne and Berlin.

Sprüth Magers Berlin will also be concurrently hosting an exhibition with works by Richard Artschwager and presenting works on paper by Robert Therrien.