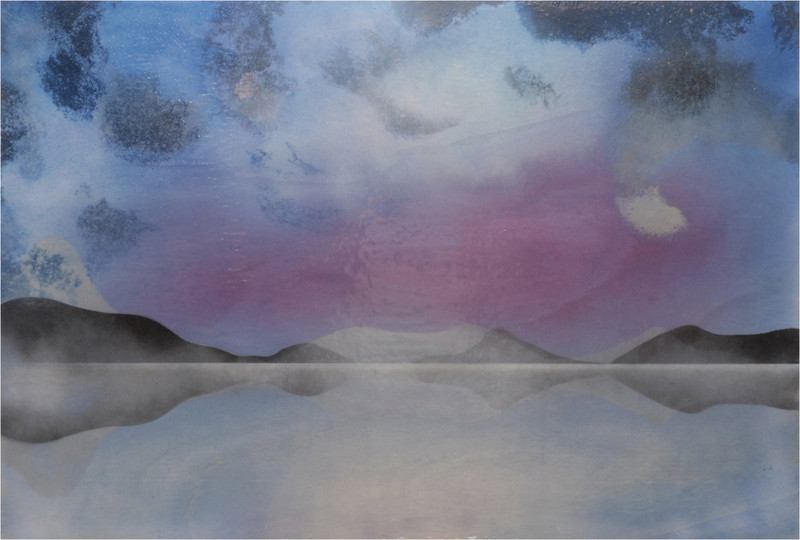 Captions:
Robert Elfgen
Lost in Landscape, 2014
125 x 86 cm / 49 1/8 x 33 7/8 inches
Copyright Robert Elfgen
Courtesy Sprüth Magers
Robert Elfgen
I wish my pictures
15/11/2014 - 17/01/2015
Mimesis, the interpretive reproduction of nature, was long considered to be the most important duty of art.
Theorists of all epochs, referring back to Aristotle, called upon artists to feel and understand the chaos and
order of the natural world in such a way that meaning suddenly became visible there where none could be
recognized before. Robert Elfgen's artistic work also focuses in an unusually direct manner on this task which,
with the advent of modernism, was pushed to the side and neglected. In recent years, Elfgen has created a
unique oeuvre in which he applies complex artisanal techniques to found pieces from nature and from his
everyday life, and assembles them into an atmospherically charged, intensely personal form of bricolage. The
realities of art and life come together in this position. Art becomes nature, nature becomes art.
In I wish my pictures, Elfgen's new exhibition at Sprüth Magers in Berlin, two thematic strands emerge into the
foreground which have been latently present in his oeuvre for a long time: the importance of landscape for our
being-in-the-world, and the processes with which we perceive or do not perceive this world. A large
assemblage sculpture, illumanted by a streetlamp protruding from the wall, is the first sight when entering the
room. The exhibition reveals itself under the watchful eye of a circular mirror, into which intarsia has been
inserted resembling a pupil. Landscape paintings and assemblages, the latter standing on the ground, guide
through the two-parted exhibition space.
The heterogeneous materials of the assemblages convey the impression of having been gathered during a
walk and rearranged after returning home. Plywood shapes symbolizing a sailboat and a seagull, glass mirrors
laid open from behind, instructions for building a confessional applied to a wooden panel, slightly damaged
traffic signs carrying surreal motifs, neckties functioning as colorful accentuation, in their resemblance to
elongated, vertical brushstrokes, as well as pictures of black-painted leaves of pressed ferns and motifs found
in the Internet, for instance a bus or a woman wearing sunglasses, combine to sculptural collages. The
individual elements not only mark certain preferences and biographical aspects of the artist. They are always
connected with each other and come back to the theme of vision and non-vision – sometimes metaphorically,
sometimes concretely, sometimes quite humorously. But first of all, the assemblages convey how the artist
himself sees nature and the world that surrounds him. The works are tantamount to abstract perception, to an
aesthetically open reordering of the world.
On the floor of the second part of the space, there is a patch made of parquetry sealed with shiny resin. The
trompe-l'oeil object illustrates the handicraft refinement of Elfgen's works: a surface fitted together like a
parquet floor emerges from left-over scraps of wood. Elfgen's technical brilliance is also apparent in the
landscapes displayed in the exhibition – maybe those landscapes from which the objects of the assemblages
originate. Here forests, mountain ranges, or lakes blend beneath shiny surfaces into various gradations of blue,
violet, pink and orange. They often convey the impression of being bathed in the intensive light of a sunset. But
the closer one approaches the pictures, the more abstract they appear. These are images which immediately captivate the viewer through the atmospheres which they evoke. Their conceptual force is only revealed upon a
closer scrutiny. Nature and art inseparably merge within these works. Elfgen has treated materials such as
water stain, sawdust, artificial silk, aluminum foil, epoxide resin, and plywood in a process that gives rise to
special surface structures reminiscent of tiny water bubbles or honeycombs. The natural, actually grown and
creaturely-coincidental comes to expression not only in the pressed plants and their imprints which he uses in
some of the pictures. All of the landscapes are kept so transparent that even the grain of the picture-carrying
wood plays a striking compositional role. It structures the pictorial space in an undulating manner and thereby
repeatedly imitates the lines of clouds and forests, of horizon and ocean.
Robert Elfgen's technically innovative bricolage-art is of course not devoid of art-historical reference. His
associative treatment of objets trouvés recalls Marcel Duchamp; his strict conceptual logic is reminiscent of
Rosemarie Trockel, who taught his masterclass. And clear allusions to the Romantic pictorial language of
painters such as William Turner or Caspar David Friedrich, along with traces of a laconicism coming from
Surrealism and Pop Art can be identified in the works brought together for this exhibition. But with his artisanal
investigations, Elfgen achieves something attained by only a few artists – the creation of an utterly personal,
unique cosmos. A cosmos that opens up a series of spaces of biographical, phenomenological, and
psychoanalytical interpretation. A cosmos in which nature and civilization merge into each other, and which
enables the viewer to see the world in a new and subtle manner.
Robert Elfgen studied first with John Armleder at the Hochschule für Bildende Künste Braunschweig before
transferring to the Kunstakademie Düsseldorf, where he completed his studies as a master scholar of
Rosemarie Trockel. He lives and works in Cologne. His works will be shown in a solo exhibition at the
Oldenburger Kunstverein in spring 2015, solo presentations of recent years were developement, Sprüth
Magers, Berlin, 2012, des bien ich, Sprüth Magers, Cologne, 2008; expedition, westlondonprojects, London,
2006; and 1 + 1 = 3 Elfgen Technik, Bonner Kunstverein, 2005. Moreover, he participated in group exhibitions
at the Kunstmuseum Wolfsburg and the Lentos Kunstmuseum Linz (2013-14), the Museum Morsbroich,
Leverkusen (2012), the Städtische Galerie Karlsruhe (2011), in Paul Thek in the Context of Today's
Contemporary Art, ZKM Karlsruhe (2007-2008) and at the Kunstverein Kassel (2006).
Sprüth Magers Berlin is concurrently presenting the solo exhibition No Drones by Louise Lawler and the group
show Arte Povera and 'Multipli', Torino 1970-1975 curated by Elena Re.
www.spruethmagers.com