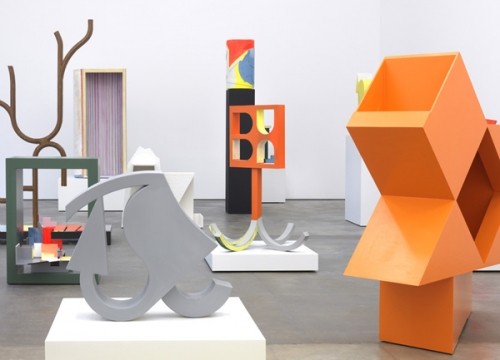 Monika Sprüth and Philomene Magers are pleased to present “The Goldilocks Zone” by Thomas Scheibitz as the inaugural exhibition at the gallery’s new space in Berlin.

Thomas Scheibitz’s work addresses the relationship between painting and sculpture. With no ‘prima maniera’, he elaborates art-historical references, popular everyday phenomena and scientific findings using a reduced index of basic forms gathered from the known world – both within and beyond the scope of visual perception. Abstract thinking is thereby confronted with the intuitive logic and recognizable similarities of the various forms and objects.

In this exhibition Thomas Scheibitz has devoted himself exclusively to sculpture and the sculptural surface. A configuration of around thirty objects marks out the exhibition space in a field-like arrangement and shows possible areas of interaction between the autonomous sculpture, its arrangement in space and concepts such as scale and proportion.

The sculptural composition within the gallery space is directly related to the title of the exhibition. In astronomy, the ‘Goldilocks Zone’ describes a habitable zone of space – an active region where the surface of every planet fulfils the minimal conditions necessary for life. This zone can be calculated and explored using model experiments. As opposed to the scientific concept, the title also alludes to a popular English children’s story whose precise date of origin is unknown. The story describes the behaviour of a young girl called Goldilocks when she finds herself confronted with unfamiliar surroundings: she tries out the various options available until she finds the objects and conditions that are ‘just right’ for her needs.

This structural approach informs Thomas Scheibitz’s strategy of pictorial invention and can also be read as a metaphor for the artistic process. Scheibitz’s titles not only form a link to the key aspects of his work, they also explore the regulating and classifying dynamic that exists between word and artwork.

An artist’s book, “The Goldilocks Zone”, is being published in conjunction with the exhibition. Featuring black-and-white photographs by Thomas Scheibitz, it provides insight into his studio practice and his method of creating paintings and sculptures in parallel. Constellations of paintings and sculptures represented in the two-dimensional plane of photography are a new focal point of Thomas Scheibitz’s work. The juxtaposition of the two media in this way precludes any hierarchical relationship between the individual elements; by establishing connections between them it places both the autonomy of the objects and their function within a broader context.

“The Goldilocks Zone” is Thomas Scheibitz’s second solo exhibition at Monika Sprüth Philomene Magers. In 2005 he presented “Der Tisch, der Ozean und das Beispiel” (The Table, the Ocean and the Example) in the German pavilion at the Venice Biennale. His most recent solo exhibition, entitled “about 90 elements / TOD IM DSCHUNGEL”, was shown at the Irish Museum of Modern Art, Dublin, Camden Arts Centre, London and the Musée d’Art Moderne, Luxemburg in 2007/2008. Thomas Scheibitz was born in Radeberg in 1968. He lives and works in Berlin.