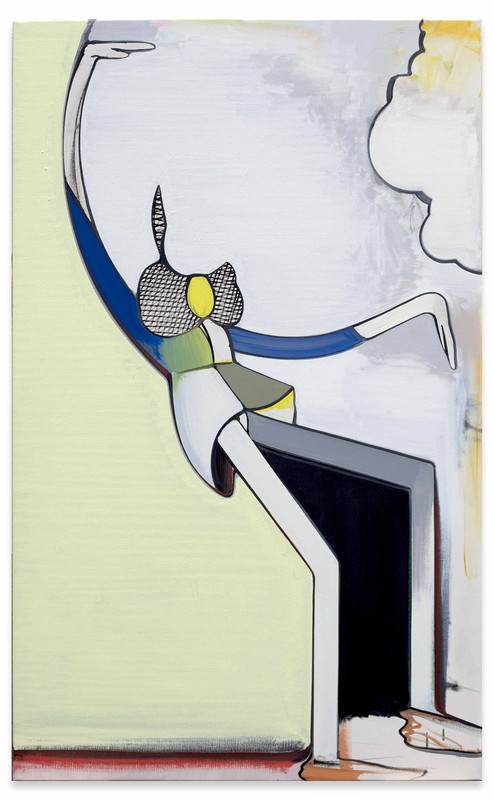 Thomas Scheibitz
Der Honigdieb, 2014
Oil, vinyl, lacquer, pigment marker on canvas
180 x 90 cm
70 7/8 x 35 3/8 inches
© Thomas Scheibitz / VG Bild-Kunst, Bonn, 2014
Courtesy Sprüth Magers Berlin London
Thomas Scheibitz
Radiopictures
18/09/14 - 01/11/14
Already in the title of the exhibition Radiopictures, Thomas Scheibitz demonstrates that his artistic
thinking, in addition to tectonics, scale, and proportion, also revolves around time-based media:
music, film, text. Temporal aspects, such as simultaneity and continuum, are for him further
dimensions of composition.
The title of the painting Historische Szene (Historical Scene) awakes associations with theatre and
film. The depicted scenery could be a film set or a stage, aiming at the liminal experience of an
ambiguous state between various layers of reality – an “open field” which can repeatedly be found in
Scheibitz’s work and in which constructions dissolve into their tectonic structures. The same is
applicable to his painting Gasthof Ravoux (Ravoux Inn), whose title, in the first instance, still refers
to the inn in which Van Gogh stayed during the last three months of his life. Here architecture
begins to unravel, combining itself with typographic elements, drifting over facial features,
confronted by alarming colours, and bobbing almost like an airship on a blue-grey ground. That
such unequivocal associations may not be intended, is also evident in the work Spiegelwolke (Mirror
Cloud): the cloud-like structures to the left of the pictorial field, in combination with a circular area,
the left bottom margin of which features a “nose of paint” and a smaller circle hovering above it,
become the tears from a head bowed in sorrow, but which could at the same time be a planet above
a mountain peak, to which an ox-blood coloured road leads: the genres of landscape and portrait
painting combine in a non-figurative composition of colours, forms, and planes.
The title Der Honigdieb (The Honey Thief), with its associations (“Honigdieb” appearing in
Scheibitz’s and the German title of Cranach’s painting, meaning “honey thief”) to the painting Venus
mit Armor als Honigdieb (Cupid complaining to Venus) by Lucas Cranachs the Elder, again
references a specific art historical example, without actually depicting a clearly perceptible figure.
The title Grammatik (Grammar) alludes to a form of systemization which plays a role in linguistics as
much as it does as a pictorial paradigm in art history. Each painting generates its own storyboard
that has telescoped into an image.
In the diamond paper publication Details I, accompanying the exhibition, Scheibitz illustrates the
process of a mindful wandering across details. The pictorial compositions are characterised by a
shimmering, flickering, pulsating of details, individual elements, structures, and materials, conveying
weightlessness as well as mobility. Scheibitz’s gaze focuses on the continual, virtually restless,
iconographic-iconological reorientation underway at present, and simultaneously on the discovery of
formal ideas reflected in the zeitgeist, which will still outlast it. Nevertheless no detail stands for a
crystallized definition of a notion, no composition represents a narrative. Scheibitz does not permit a static regime of meaning to emerge, he finds any proximity to ideology suspect. Instead he asks for
example: is the form derived from an everyday object already art, or an element of design for the
mass market? Can the same approaches to compositional analysis be used for both? Are the two
modes of interpretation perhaps based on the same design principles?
In order to find out, Thomas Scheibitz dissects details of the visible world as well as his own works
into fragments, examining the individual components – transferring them like individual words,
graphemes, phonemes, morphemes, lexemes into his visual language. He relocates them to his
very own world of hue and form, to be neither categorised there as abstract nor figurative. Similarly
to processes of encryption, information is divided. In doing so, Scheibitz values chance, not only as
a testing apparatus, but also as a generator of cognitive dissonance. Ultimately however his
drawings, photographs, paintings, and sculptures culminate in extremely precise analyses of such
factors as expectation, attitude, and experience, which also inform his own gaze. He interrogates
such structures, disassembles the interpretational schema, organises the elements as if in a
periodic system, recomposes them, tests arrangements, and employs the most differing
mechanisms of selective emphasis, accentuation, and attribution.
Thomas Scheibitz‘s works function, in this manner, like the concealed sources of sound or the cut
ups, which William S. Burroughs recommended in his essay The Electronic Revolution (1970) to
instigate a revolution: the found components are extracted from the seemingly obvious fabric of
meaning; the viewer’s fundamental notions, unconsciously received and pre-defined in terms of both
emotions and norms, become corrupted; context and its functional modes are subversively
undermined. Burroughs opposed conditioning generated by word-image or word-word
combinations, which like a virus manipulates the thinking of the individual and which is misused by
ideologues. Scheibitz is also wary of any form of narrative and attendant viral infiltrations. He seeks
a visual language which immunises him, as well as the recipients of his works, against such viruses,
thus enabling emancipation.
Thomas Scheibitz (*1968, Radeberg, Deutschland), studied at University of Fine Arts of Dresden
and lives and works in Berlin. Recent solo shows have been held at BALTIC Centre for
Contemporary Art, Gateshead (2013) and MMK Museum für Moderne Kunst Frankfurt am Main
(2012). Most recent group shows include BubeDameKönigAss Neue Nationalgalerie, Berlin (2013),
One Foot in the Real World at Irish Museum of Modern Art, Dublin (2013), Das doppelte Bild at
Kunstmuseum Solothurn (2013), as well as Fruits de la Passion at Centre Pompidou, Paris (2013)
and Don't be Shy, Don't Hold Back at San Francisco Museum of Modern Art (2012).
www.spruethmagers.com