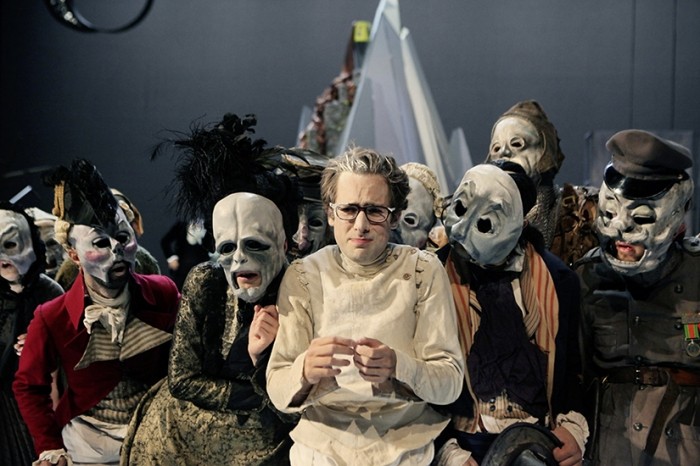 “A small island of reality ... sometime before the creation of the universe.”

Alexandre Singh’s The Humans represents the culmination of years of study, writing, drawing and sculpting by the artist for the creation of a three act theatre play. Commissioned by Witte de With, Rotterdam, and Performa 13, New York, Singh’s story unfolds amid an allegorical landscape: a mountain rises centre stage separating the realms of Charles Ray, the pontifical Apollonian sculptor, and N, the silent, agile Dionysiac Rabbit Queen. Seeking to introduce chaos into an otherwise orderly cosmos, Tophole, Charles Ray’s fretful son, and Pantalingua, N’s daughter and interpreter, plot to contaminate the sculptor’s perfect statues with the passions, desires and bodily functions of humans – cold stone made living flesh.

Their plan is uprooted when the humans stage a rebellion led by Vernon Montgomery Spruce – the unscrupulous human transformed from the only sculpture Tophole has made in Charles Ray’s studio. The humans embrace their newfound appetites and imperfections, introducing song, dance and anarchy into this otherworldly realm presided over by the mysterious authority Vox Dei. Though never seen, Vox Dei communicates through an air conditioner’s hum, an espresso machine’s gurgle, and a playful black cat, the curious Ms. Chief. Will the machinations of Tophole and Pantalingua corrupt humanity forever? Can Charles Ray wrest control of his creations? Will Vox Dei provide the revelation they seek, or will the humans be forced to define their own fractured truth?

Following performances at the Rotterdamse Schouwburg and the Brooklyn Academy of Music, the body of work presented at Sprüth Magers in London transforms the gallery into a theatre-cum-museum devoted to the universe of objects and characters depicted in The Humans. The gallery’s shop front windows provide a proscenium arch for the projection of a full-length film of a performance of The Humans. This theater-like space is outfitted with crimson curtains, confounding the distinction between stage and audience, actor and viewer.

The exhibition continues into a museum of sorts where the ideas and characters that bring the story of The Humans to life emerge as objects and have their own particular resonance as artworks. A range of works are displayed including sketches for costume designs, watercolours of masks, and drawings for the humans’ daily newspaper. Singh conceived every last detail in the play, from the humans’ currency to N’s preferred choice of reading material to the wrinkles and lines of each character’s mask. Bronze busts of four characters as well as cast brass guises, small masks worn by Tophole and Pantalingua, connect pieces active in the play to historical forms and processes of sculptural production. Key figures from the play are depicted in large-scale photographic portraits. The photographs, with the characters posing in costume in a formal setting, bring to mind a mix of Renaissance portraiture and Hollywood pin ups.

The Humans presents a parallel world where an age-old conflict at the heart of Western culture takes place. On one side, the Rabbit Queen is all flesh and Dionysian energy, while on the other the Apollonian sculptor attempts to achieve perfection of form through his art. Pantalingua and Tophole navigate and interpret these two positions for the viewer. Singh animates their journey by dipping deeply into the history of art and literature, reinforcing his vision with a strong dose of bawdy puns and petty quarrels. Aristophanes, Shakespeare, Woody Allen, George Grosz, Oscar Wilde, Rabelais and Daumier all make their presence felt. These figures coalesce into a comedy about the complex cultural legacy inherited by any artist today. The Humans is a story about creation itself, the struggle of the artist to come to grips with his predecessors and master his own material.