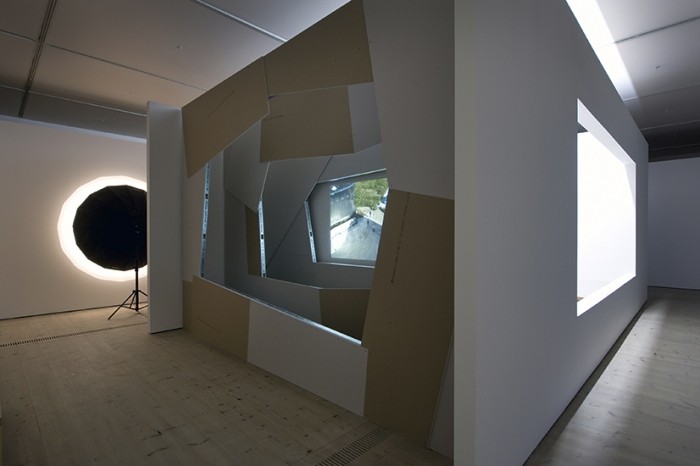 David Maljkovic is known for multifaceted exhibitions that investigate the erosion of memory and the corruption of information, revealing how ideas can be worn down by the effects of time and technology. For his second show at Sprüth Magers London, Maljkovic will present a group of inkjet photo collages titled New Reproduction (2013), as well as Afterform (2013), a single slide projection, and a new version of the HD video Out of Projection (2009-2014), a title that the artist has used for a number of previous, related works. The formal principle of collage is key to Maljkovic’s oeuvre: the artist has adopted this method as a way to respond to our defective memories, recombining photographs, films and projected images from his own personal archive.

Entering the main gallery space, the viewer will be struck by an overwhelming presence of a ghost from a previous exhibition: the artist has covered the main gallery walls with black-and-white, blown up installation photographs of his recent show at the Palais de Tokyo, Paris. The photographs depict a blank projection screen in an otherwise empty room, the concrete architecture and bare lighting suggestive of a large, utilitarian building. Transformed by the huge photographs, the gallery walls take on the illusion of an extended, institutional space, disrupting the spatial and historical coherence of the exhibition. The video Out of Projection , projected on the screen facing the entrance to the gallery, depicts retired engineers walking on a Peugeot test track in Sochaux, France. The overall texture of the moving image is dreamlike, yet also suggestive of a surveillance film, as the men and women walk in slow motion amongst futuristic cars, unaware that they are being filmed. This sense of dislocated time extends to the screen on the large wall, where Afterform, a single, unchanging slide, is projected. Maljkovic transformed a digital image of an earlier work into an analogue slide and projected it onto a facsimile screen from a previous exhibition. This Afterform image is recapitulated again in the smaller gallery, this time enlarged and used as wallpaper.

Throughout the galleries, on blank walls and overtop the large photographs of the interior of the Palais de Tokyo, Maljkovic will hang his ‘New Reproductions’ collages. The Kodak ‘color control patches’ and ‘gray scale’ charts alongside the diverse photographic imagery present the possibility of external structures of measurement, even objectivity. Yet the torn and layered inkjets propose a deep, unending archaeology of imagery, where there can be no whole or true picture. Through his use of repetition, layers and ambiguity, the artist invites viewers to make multiple and even conflicting interpretations of the exhibition.