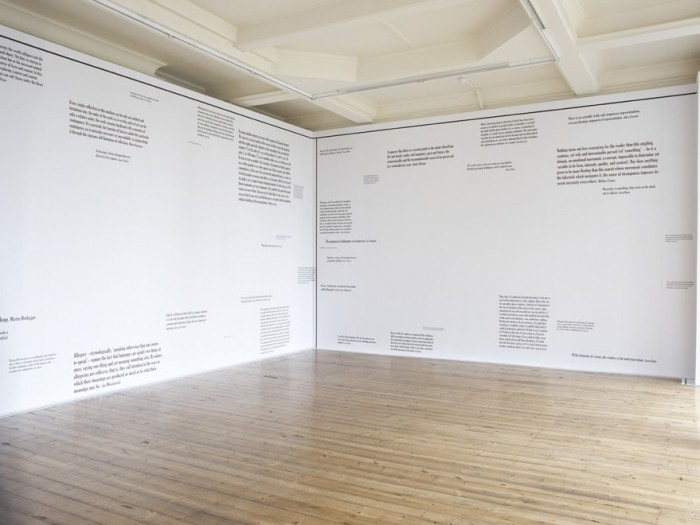 Installation view
JOSEPH KOSUTH
'The Mind’s Image of Itself #3’ a play of architecture and the mind
10 September - 1 October, 2011

Sprüth Magers London is delighted to present a site-specific project by internationally acclaimed Conceptual artist Joseph Kosuth entitled ' 'The Mind’s Image of Itself #3’ a play of architecture and the mind '. The work is part of a series which was first conceived for an exhibition at the Palazzo Bembo, presented at this year’s 54th Venice Biennale, followed by an artist project which will feature in Frieze Magazine’s 20th Anniversary Issue this September.

'The Mind’s Image of Itself' is both a reflection on the architecture of the gallery space and of a suggested architecture of the mind. The installation is composed of an off register, a 1:1 wallpapered line drawing facsimile of the gallery rooms themselves; an architectural plan of the exhibition space visible only due to its off-centre positioning. Kosuth re-frames a structure that literally replicates and shifts the existing morphology of the once Georgian and Victorian architecture of the London gallery. The mind’s ‘image of itself’ is a reflection within itself, an allegorical re-tracing of the defining elements that make up both the physical context of the exhibition itself (its walls, doors and windows) while simultaneously presenting the various meanings that the space, as an architectural object and a social/culture interface in play, reflects. These aspects are articulated by the insertion of a fragmented intellectual discourse made up of more than 150 meticulously selected quotes by diverse thinkers from a variety of sources put in play as wall texts throughout this double architectural setting. The artist pairs the image of an architectural grammar with that of a multitude of voices and associations constructing an interior contemplative space where readers, as visitors, enter and dwell in the architecture of a house of ideas.

Often referred to as ‘the father of Conceptual art’ with works such as One and Three Chairs, Joseph Kosuth is credited with initiating appropriation strategies, language based works and the use of photography in the 1960’s. His work and writings consistently explore the production and role of language and meaning within art. This over forty year inquiry into the relation of language to art has taken the form of installations, museum exhibitions, public commissions and publications throughout Europe, the Americas and Asia, including numerous documentas and Venice Biennales. His work is in most museum collections in the United States, Europe, Australia and Asia. Awards include the Brandeis Award, 1990, the Frederick Weisman Award, 1991, the Venice Biennale Menzione d'Onore, 1993, and the Chevalier de l'ordre des Arts et des Lettres from the French government in 1993. Kosuth was awarded a Cassandra Foundation Grant in 1968, at the age of 23, as the choice of Marcel Duchamp one week before he died. In 1999, in honour of his work, the French government issued a 3.00-franc postage stamp in Figeac. In 2001, he received the Laurea Honoris Causa doctorate in Philosophy and Letters from the University of Bologna. In 2003, Kosuth was awarded the Austrian Republic’s highest honour for accomplishments in science and culture, the Decoration of Honour in Gold. In 2009, Kosuth’s exhibition entitled ‘ni apparence ni illusion’, an installation work throughout the 12th century walls of the Louvre Palace, opened at the Musée du Louvre in Paris and will become a permanent work in October 2012. His work on the façade of the Council of State of the Netherlands will be inaugurated in October this year and he is currently working on a permanent work for the four towers of the façade of the Biblioteque Nationale in Paris, expected to be completed in 2012.