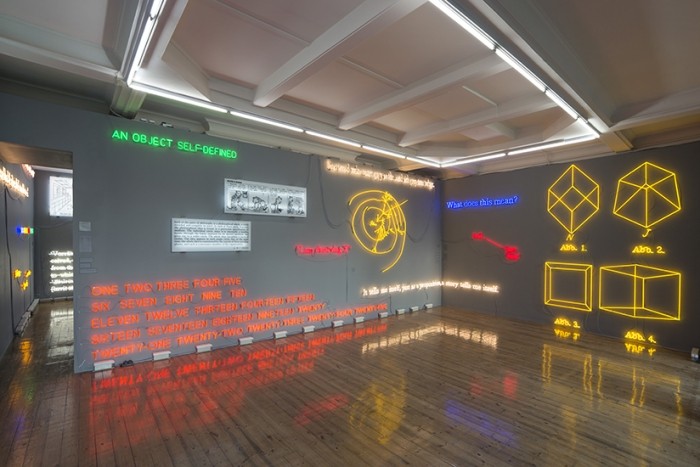 Featuring work that dates from 1965 through to 2011, 'Amnesia: Various, Luminous, Fixed.' offers an extensive overview of Joseph Kosuth’s oeuvre in neon. The show chronicles an almost 50-year investigation into the role of language and meaning in art, as well as Kosuth’s enduring use of neon, which he first developed as a medium in the 1960s (preceding Bruce Nauman, Mario Merz and Keith Sonnier, for example), when Kosuth considered the medium a form of ‘public writing’, without fine art associations. The exhibition will feature 25 of Kosuth’s neon works, including one of the artist’s first neons Five Fives (to Donald Judd) [orange] (1965), alongside recent works such as three from his Beckett series (2011). ‘Amnesia: Various, Luminous, Fixed.’ follows ‘Insomnia: Assorted, Illuminated, Fixed.’, a comprehensive exhibition of neon work by the artist at Sprüth Magers, Berlin in 2013.

An important pioneer of conceptual art, Kosuth initiated appropriation strategies, language-based works and the use of photography in the 1960s. The artist characteristically develops his investigations into language and perception through the use of series, a format that opens up space for play and reflexivity in multiple directions. In the celebrated Freud series (1981-1989), Kosuth re-positions and reflects on the meanings employed in psychoanalyst’s texts with pieces and installations. Fetishism (Corrected) (1988), for instance, consists of an enlarged reproduction, complete with corrections by Freud's hand, of the opening page proof of the essay ‘Fetischismus’. Kosuth extricates the corrections, converting them into cobalt blue neon and mounting them together on the wall around the framed proof, highlighting how writing is studied and converted into artefacts, and from artefacts to art. Three works from the recent Beckett series (2011) will also be exhibited. Fabricated in warm white neon with the facing side dipped in black paint, Kosuth uses fragments from two of Beckett’s works: the renowned Waiting for Godot and the lesser-known Texts for Nothing. The playwright and artist share an interest in how language can conceal and reveal meaning in the act of constructing new meaning; while Beckett approaches the question of meaning by investigating its absence, or the impossibility of meaning revealing itself through language, Kosuth asserts its presence by posing questions about how meaning is produced, by both artist and viewer.

Joseph Kosuth lives and works in New York and London. He has participated at numerous Documentas and Venice Biennales, and his work is included in most museum collections in the US, Europe, Australia and Asia. In 2001 he received the Laurea Honoris Causa doctorate in Philosophy and Letters from the University of Bologna and in 2003 the Austrian Republic’s highest honour for accomplishments in science and culture, the Decoration of Honour in Gold. In 2012 Kosuth was inducted into the Académie Royale des Sciences, des Lettres et des Beaux-Arts de Belgique. Kosuth’s exhibition entitled ni apparence ni illusion, an installation work throughout the twelfth-century walls of the original Louvre Palace, opened at the Musée du Louvre, Paris in 2009, and will become a permanent work this year. His work on the façade of the Council of State of the Netherlands was unveiled in October 2011 and he is preparing a permanent work for the four towers of the façade of the Bibliotheque Nationale in Paris, planned for 2015. Recent exhibitions include '(Waiting for -) Texts for Nothing' Samuel Beckett, in play, at the Australian Centre for Contemporary Art, Melbourne (2010) and – in an extended version – at the Haus Konstruktiv in Zurich (2011). His most recent exhibition is Sigmund Freud and The Play on the Burden of Representation, 21er Haus, Belvedere Museum, in cooperation with the Sigmund Freud Museum, both Vienna. The exhibition acknowledges the 75th anniversary of the death of Freud.
www.spruethmagers.com