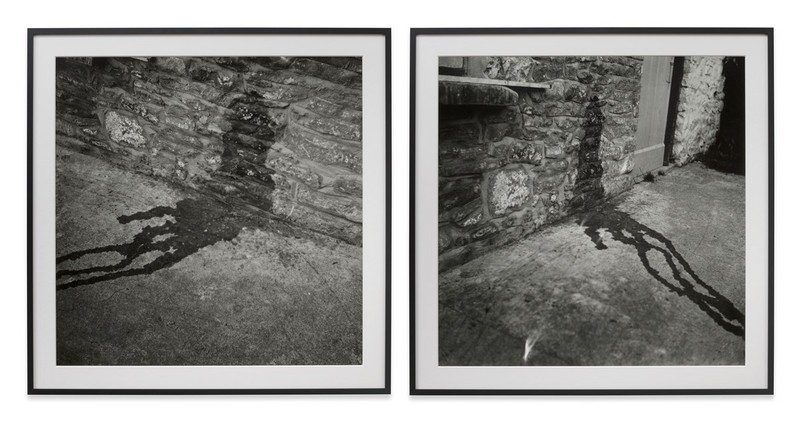 Keith Arnatt has occupied a key position in the history of British conceptual art for almost 50 years. Since his death in 2008 he has become an important model for contemporary artists who work at the limits of art’s ‘dematerialisation’: site-specific interventions, time-based gestures, or works of art that are seemingly short-lived and inconspicuous. Absence of the Artist, Arnatt’s second exhibition with Sprüth Magers and his first in the London gallery, brings together a range of important work conceived between 1967-72, key years when Arnatt made Self-Burial (1969), Portrait of the Artist as a Shadow of his Former Self (1969 -72) as well as The Absence of the Artist (1968), exhibited here for the first time.

The Absence of the Artist betrays the artist’s deadpan wit, wholly characteristic of Arnatt’s response to the various conflicts stimulating the art world throughout the late 1960s. The viewer is presented with a paradox: a sign, posted on a brick wall and photographed in black and white, declares the absence of the artist. Yet by denying his absence, he thrusts himself forward, seemingly emphasising the artist’s role. The Absence of the Artist highlights a fierce ambivalence about the artist’s role that was prevalent at the time. As more sceptical, pluralist ideas about art were starting to replace modernism – and its pantheon of great artists – the role of the artist was subjected to constant investigation. What divides the artist from his work or the ideas that it might produce? Do we even need the actions of an artist to declare something an artwork?

Mirror-lined pit (grass bottom), 1968, An invisible hole revealed by my own shadow (first executed June 1969) continues this line of questioning. This photograph depicts a particular encounter with a series of Mirror-lined pits that Arnatt first executed in June 1969. The Mirror-lined pits consist of a mirror-lined case inserted into a small, excavated space in the ground, creating at once an intervention in a landscape and an illusion – a pit as an almost invisible absence. Depending on the light conditions and the angle of approach, the Mirror-lined pit might disappear into itself, to be revealed only by the shadow of an onlooker, or the artist. Mirror-lined pit (grass bottom), 1968, records such an encounter. Arnatt created a scenario that allows his shadow, usually a sign of the presence of a body, to generate another absence. Yet as viewers of the photograph, we are left with both a depiction of a puzzling object and a new, puzzling object in its own right. In an interview, Arnatt discusses how trying to comprehend a photograph of a Mirror-lined pit can be as tricky as approaching the object itself: ‘The photographs, more often than not, did not make at all clear what was photographed, but rather, presented the viewer of the photograph with precisely the same difficulty.’ A similar air of withdrawal and conundrum characterizes Portrait of the Artist as a Shadow of his Former Self, where an empty black form, a sooty ghost, occupies the urban landscape where once stood the artist.

Withdrawal or ‘doing nothing’ achieves its decisive form with Is it possible to do nothing as my contribution to this exhibition? (1970). The artist proposed that he do nothing for an exhibition at Camden Arts Centre and yet the proposal itself acknowledged – in the text that is the artwork, which appeared in the catalogue only – that ‘I can put forward the idea that “I did nothing” as my contribution to this exhibition, as an idea only.’ The idea persists to this day, paradoxically immortalising the artist’s desire to contribute nothing, to forgo the making of an artwork, and simply to disappear.