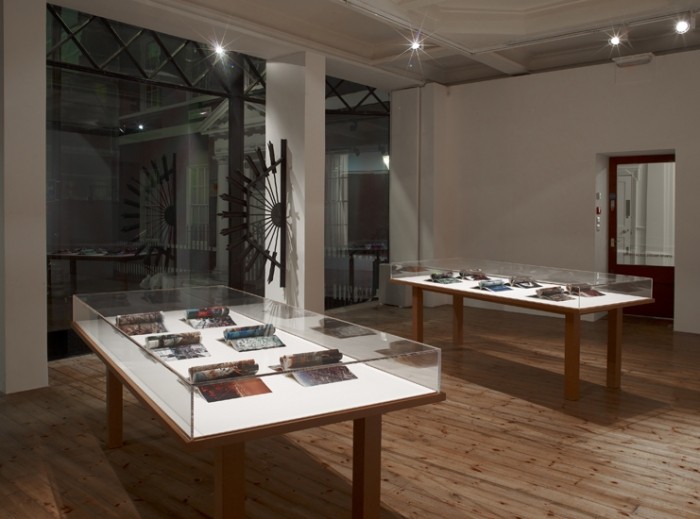 Monika Sprüth and Philomene Magers are delighted to announce ‘From Wings to Fins’, an exhibition of Color Field paintings by Morris Louis and new work by Cyprien Gaillard.

While discussing his earliest body of work with Hans Ulrich Obrist, Gaillard remarked that his process involves going ‘deeper into the crevice of negativity or failure to rise again somehow’. Gaillard travels in search of everything from overlooked corners of the landscape to colossal ruins, sites of potent desolation that he re-imagines as haunting objects.

Fence (after Owen Luder) (2013) is a bronze replica of a security structure that Gaillard retrieved from the wreckage of Luder’s Trinity Square car park, Gateshead. Placed on a column in the gallery, Gaillard transforms a throwaway fragment of Brutalist architecture into a strange metallic flower, its rays and petals curled and bent, showing all the damage the object sustained when the building was slowly crushed to the ground in 2010. This ambiguous sculpture – half ornament, half threat – seems to protect the contents of the gallery and advertise its presence at the same time. Yet it is also infused with loss. Luder, once the president of RIBA, has lived to see almost all of his buildings destroyed. As Tom Morton writes in his catalogue essay, ‘Fence (after Owen Luder) is a sculpture that is preoccupied with rising and falling, with dawns and with dusks. The original sunburst of palisade fencing was put in place to prevent Tyneside kids scaling the car park’s façade as though it were an urban Everest, a building that perhaps more than any other spoke of a brief, hopeful morning in which Modernist mountains rose up from Britain’s conservative soil.’

Interacting dynamically with Gaillard’s sculpture is Beth Samach (1958), a work from Morris Louis’s ‘Veil’ series. Louis fascinates Gaillard because despite his fame he remains a slightly obscure figure who destroyed most of his early work and died relatively young. But Gaillard also sees in Louis a kindred spirit, an artist whose process was tinged with risk: in the luscious stains, crevices and spills of pigment he perceives barely controlled violence and disintegration, even the dust and ghostly afterlife of a destroyed building.

Gaillard sets up an array of formal and geographical leitmotifs throughout the exhibition. Placed in vitrines in the centre of the gallery, Gaillard displays collages made from pages of reconstructed National Geographic magazines as if they were specimens of flora. The artist took pages from the magazine’s heyday – the 1960s through the 1990s – then collaged them without glue into kaleidoscopic waves. These delicate, unfurling images become the exquisite corpses of globalisation, held together only by the internal pressure in their ridges and crevices, a tension that Gaillard detects in the paintings of Morris Louis.

The title of the exhibition derives from a November 2006 feature in National Geographic, ‘From Fins to Wings’, a look at how some of biology’s more complex features – the eye, for example – evolved. Washington D.C., the institution’s headquarters, also provides the geographical nexus for the show. While Morris Louis painted most of his best-known work in the American capital, its lesser-known neighbour Baltimore, Maryland, was in fact the artist’s hometown. Gaillard visited the city as a way to pay tribute to the artist, making there a group of his ‘Gates’: frottage rubbings of manhole tops. On one half of a piece of paper, Gaillard would lie on the ground to create a ‘Gate’ in Baltimore, then take that paper to Washington D.C., where on the other half he would create a rubbing of one of the city’s floral-patterned manholes, shrinking time and space into a diptych of America’s urban and industrial evolution.

Nothing could be more utilitarian than a manhole cover, yet Gaillard transforms them into images loaded with metaphorical portent. In Los Angeles, he found manholes labelled ‘City of Los Angeles’ / ‘Made in India’, and thus the manhole itself became a kind of portal to another world. In Baltimore, the manholes had a ghostly grid pattern, as if imprinted with the memory of Modernism. For Gaillard, the ‘Gates’ could also offer a portal to an underworld where the artist imagined the rivulets of Louis’s pigment running through the sewers of his hometown. Like the drip paintings of Louis, Gaillard seeks in his own work a precarious balance between defeat and beauty, entropy and permanence.

Gaillard was born in Paris and lives and works in Berlin and New York. He has had solo exhibitions at a number of major institutions including: MoMA PS1, New York, Hammer Museum, Los Angeles, Schinkel Pavilion, Berlin, Centre Georges Pompidou, Paris, and Kunsthalle Basel, Switzerland.
www.spruethmagers.com