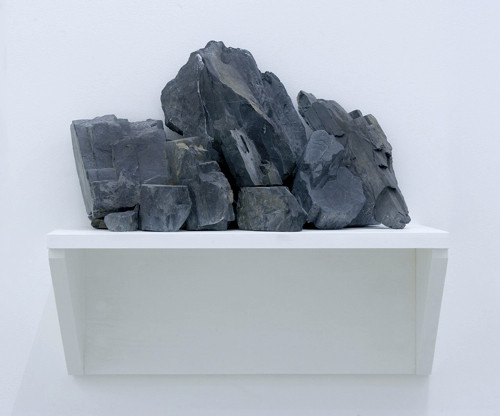 STANDARD (OSLO) is pleased to present an exhibition of new works by Ane Graff. "Fall Into Matter" sees Graff widening her range of medias, adding both sculptures and photographic works to her signature-styled pencil drawings. Despite their formal differences these works share a clear interest in the still life as a genre and the scientific principle of verification.

"The world is everything that is the case."
– Ludwig Wittgenstein: Tractatus Logico-Philosophicus (1921)

At the heart of "Fall Into Matter" is the poetics of scientific research. Having previously taken an interest in the 17th century 'Wunderkammer' – investigating the space between the factual and the fictional – Graff's new drawings and photographic works portray the prosaic procedures of scientific research. Entirely derived from existent media – mainly gathered from university web sites – her three meticulously executed drawings present us with basic acts of measuring, dissecting and documenting. Nowhere can the scientists or students involved be seen. Rather, Graff's drawings concentrate on the instruments applied and the traces of the various procedures. These are the matters of fact. However, these documentary photographs – now turned drawings – appear as more than mere rational conclusions. Present is also a triumphant belief in observational evidence, and a commitment to a positivism doubtlessly stating that the world and its phenomenons can be understood through collection, observation and verification.
"One by one objects are defined—It quickens: clarity, outline of leaf". The description of transformation by the American writer William Carlos Williams, in the poem "Spring And All" (1923), also serves a description of coming into knowing. The belief in an essence – as with Wittgenstein's belief in observational verification and that all knowledge should be codifiable in a single standard language of science – is in the case of William Carlos Williams merged with a constant stripping-down of language. In Graff's photographic series Western Kingbird Juvenal Wing 1-6 an equal essence and economy of language is trusted. Appropriated from an American laboratory of ornithology these six photographs show hands carefully folding out the various feathers of the wings of a Western Kingbird. As with the poem of Carlos Williams this simple statement of what nature is, the result is equally rational and poetic.
Located in the opposite corner of the exhibition space is a group of sculptures. Mounted on the wall are two wooden shelves where Graff has arranged formations of slate. Partly freestanding, partly leaning up against the wall these formations – of this fine-grained and layered rock – appear as models of a mountain landscape. Again and again the artist has configured similar constructions in her studio, applying them as models for her drawings. With this exhibition they take place among the other works, while still appearing uncertain of themselves as models, as stage props, or as autonomous sculptural works.
This is Ane Graff's second solo exhibition at STANDARD (OSLO). Since graduating from The National Academy of Fine Arts in Bergen in 2004 her works have been included in such exhibitions as "The White Works", Bergen Kunsthall; "New Realism", Oslo Fine Art's Society; and "The Elementary Particles (Paperback Edition)", STANDARD (OSLO). Ane Graff lives and works in Oslo.
www.standardoslo.no