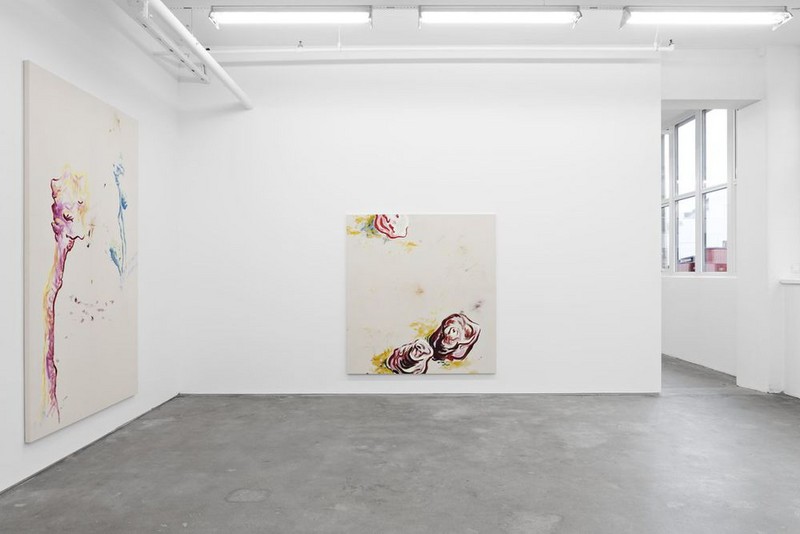 STANDARD (OSLO) is proud to announce an exhibition of new works by Anna Zacharoff. Entitled “The Last Day of Floundering”, this is the first exhibition with the gallery for the Frankfurt-based artist, presenting a group of six paintings concerning themselves with careful yet clumsy attempts to move or regain one's balance.

“The essence of slapstick is slowness.”
- Brian Dillon

“Fish are always eating other fish. If fish could scream, the ocean would be loud as shit. You would not want to submerge your head, nothing but fish going "Ahhh, fuck! I thought I looked like that rock!”
- Mitch Hedberg

With a title as “The Last Day of Floundering”, there is a rightful hope that somebody is somewhat able to make it out of the mud. When additionally such a title comes from an artist that has yet to graduate from college, it is instantly evoking as much of the personal as the peculiar. The one floundering could perfectly possibly be the artist herself. And while the term – supposedly originating from a blend of founder and blunder – would describe to struggle or stagger clumsily in mud or water (or whatever liquid that makes up college and makes it so difficult to leave), it is nonetheless suggesting a certain potential. The flounder, resting on the seabed and permitting subject and surroundings to become one, can hide and hope for opportunity to come.

The seabed is exactly where Zacharoff locates her paintings. The works here on view put forward renditions of seaweed, sea tulips, mussels and turtles. One could be rushed into labelling them as landscape paintings, but that would merely be a result of these creatures belonging to and in our minds intrinsically linking to the vast landscape that is underwater. A logical short circuit following an equally logically shortcoming: most of our knowledge of this world is randomly heaped together from summer snorkelling, zapping past Discovery Channel and from flicking through old issues of National Geographic. Regardless, there is the expectations of grandness, that preferred scale of painting as well. To say that they represent an echo that has resounded for 100 years would be to neglect a whole lot of distance and distortion, but oddly enough these works appear at a similar intersection identified by Wassily Kandinsky in his text “Concerning the Spiritual In Art” (1912) where he sees painting in its utmost purity as pioneering new territories. When discussing painting and essentially speaking of colours, he found them “living an independent life of their own, with all the necessary qualities for further, autonomous existence, prepared to make way readily, in an instant, for new combinations, to mingle with one another and create an infinite succession of new worlds”. After European colonialism and practice of painting have equally spent a mere century expanding into exotic and unmapped territories, maybe going underwater is to avoid entering into the endgame.

However, these paintings have little of that grand landscape appearing. Instead Zacharoff chooses to extract the above mentioned creatures from their natural habitat; rendering them as placeless, singular objects, laconically executed in oil paint against large blank areas of unprimed cotton canvas. The result is an eerie isolation, which also somehow serves to amplify the fact that these creatures belong to a space inaccessible to our tools of communication. And, while the reduction draws attention to the object itself, it also draws attention to the inevitable subjective in the act of observing an object. Even more so in depicting an object, and here observation gives way for a mutation that has the artist casually in almost a cartoonish manner stretching shapes, collapsing contours and unhinging colour of its realist responsibilities. A dyslectic inflection, she would admit herself, that reminds that mimicry and deformity sometimes merge: the first few examples of military camouflage were the result of applying knowledge from painting. “In order to deform totally the aspect of an object, I had to employ the means that cubists use to represent it”, as stated by Lucien-Victor Guirand de Scévol, a fine painter himself and first commander of the French Camouflage Corps founded in 1914. The flounder is folded and unfolded in space. The viewer is dazzled and deceived.

The paintings of Zacharoff have – to use a term from the late Mike Kelley – a 'foul perfection'. They are exaggerated to locate some sense of the essential, like the costume of the sign flipper that is clear when approaching from a distance and crude if viewed up close (waiting for the lights to turn green again). The vibrancy of the colour, the abrupt strokes of the brush, and the tense standstill of the composition, all seem to seek to express an energy that these creatures – now trapped onto the canvas – are capable of. But no different than a mobile phone battery continuously charging overnight, the result is a gradual depletion. In that sense Zacharoff shows a sense of affinity to one of the greatest classics of Scandinavian slapstick, “Att angöra en brygga” [“Docking the Boat”] (1965), written and directed by Hasse Alfredsson and Tage Danielsson. The film presents us with the following dilemma: A group of friends is preparing a party on a small island in the Stockholm archipelago. The plan is to celebrate the summer evening by eating crayfish and drinking snaps. The first group has already arrived on the island (with the food) and the second group can be seen approaching by boat (bringing the snaps) at the very beginning of the film. It is a scene of great promise: everyone is prepared to enjoy the evening. They just got to dock the boat – that is all to it. However, the remaining part of the film is in its entirety spent observing all attempts at coming ashore failing. Brian Dillon, writer and editor of the magazine Cabinet, sums it up in his discussion of slapstick: “Slapstick is inherently logical: its subject is reason itself, and its form is but a repeated insistence on the relation of cause to effect.” We are continually reminded of what can not be avoided. The various clumsy attempts to move or regain one's balance result in a stop, a stutter and a restart – the Sisyphean task of solving the small pleasures and problems of the petit bourgeoisie. The viewer and the cast are left to equally endure: if afloat, but yet without seafood, make sure to have enough snaps.

Anna Zacharoff (b. 1987, Stockholm) lives and works in Frankfurt am Main, Germany, where she is a student at the Städelschule - Staatliche Hoschschule für Bildene Künste. Recent exhibitions include “Nuit Américaine‏” at Office Baroque, Brussels; “Anna Zacharoff Presented by Neue Alte Brücke” at Vilma Gold, London; and “Freak Out” at Greene Naftali Gallery, New York. This fall will also see Zacharoff contributing to exhibitions at Bianca D’Alessandro, Copenhagen, and Neue Alte Brücke, Frankfurt am Main.
www.standardoslo.no