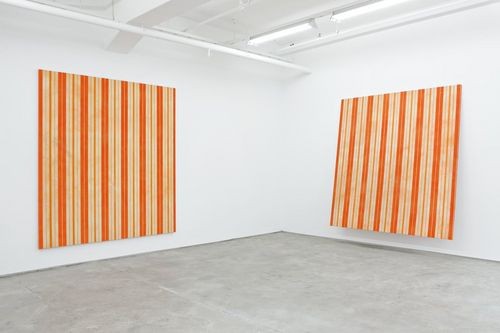 STANDARD (OSLO) is proud to announce an exhibition of new works by Fredrik Værslev. Entitled "Lanterne Rouge", the exhibition brings together 20 new paintings for both of the gallery's venues. All stemming from his recently developed series of 'canopy paintings', Værslev is exploring a matter of factness in his paintings while employing a process that reveals this fact as highly fictionalized.

"The vertical is in my mind. It helps me give my lines a precise direction and in my quick drawings I never indicate a curve – for example, that of a branch in a landscape – without an awareness of its relationship to the vertical."
– Henri Matisse

"I Got Stripes."
– Johnny Cash

Today is not a particularly suitable day for Fredrik Værslev to make paintings. The weather forecast for Oslo and its surroundings reads: "19 degrees Celsius. Light breeze. Partly cloudy". Of course, with each of his 'canopy paintings' there is a prosaic initial process: to sketch up the pattern, to lay on the masking tape, to prime and to spray on the stripes constituting the foundation. Nonetheless, for the work that follows there would have ideally been sun, rain, or even better, a day of snow. Meteorology and methodology are inevitably interlinked in Værslev's practice.

Without a change in the weather there would not even have been the starting point for these paintings. As more than suggested by their titles, Værslev has taken the canopy – or awning, if you prefer – as the source material to continue his investigation of application of paint within architecture. For the first of the two venues the paintings are even fully integrated in the gallery interior, each made to measure its window panes. Pairs of paintings have then been sandwiched with one facing the gallery and the other facing street level – leaving the gallery with the appearance of a paper lantern of changing styles and colours. For the other gallery space the range is reduced considerably more than what one would expect. The set of six paintings are all varying in terms of scale, but done in an utmost uniform palette and pattern. Groups of thin vertical stripes are executed in various hues of orange. Surface is divided. Colour is compartmentalized. This structured mode of repetition is, however, interrupted by a multitude of marks and deviances in terms of texture and tonality. In the same manner that a canopy is subject to seasonal changes, the canvases have been left outside. Weather is allowed to make its marks and Værslev adds his own through mechanical work: rolling up, brushing off, sanding down, rinsing, only to be pouring back on the residue and tarred water from the brushes. Occasionally, there are paint marks, but never brush strokes.

These are the underlying principles of Værslev's paintings, which could easily lead to the conclusion that he's got stripes in the Johnny Cash kind of way; one that comes with a jump suit and a complimentary set of chains. Not only does the complete commitment to subject matter result in a very narrow set of parameters (and a finely negotiated notion of spontaneity), but by choosing the very motif of stripes he finds himself knee deep in art historical references (comparisons to Barnett Newman's zips, Daniel Buren's wallpaper or Frank Stella's pinstripes, among few, are inevitable if not entirely invited). Værslev's interest, however, is not primarily concerned with geometric abstraction and even less so with the legacy of abstract painting. Rather, there is an interest in how these paintings fade in and out of abstraction and an acute sense of representation. As would be the case with his previous 'terrazzo paintings' – where the appearance of faded floors of marble clay got copied onto the canvas – Værslev's recent paintings are equally employing a material bordering on the banal and translating processes of disintegration and cyclical accumulations of marks. While rendered true enough to make them appear as a real, they leave enough of perception to defy pure description. Like the prefaded look of the retro baseball cap, there is the eerie co-existence of patina and box-fresh crispness.

"Just wait till the painting has been exposed to a couple of showers, been gashed a little by some sharp nails and so forth, and then been carted around the world in all sorts of miserable, leaking boxes ... Oh yes, in due course I think this should be good! ... It only needs few flaws in order to become really good." As a Norwegian artist it's difficult to escape the omnipresence of Edvard Munch, but the quote from the old master could hardly be more on target for a more than hundred years younger apprentice. Værslev's approach to painting – or affirmation of painting – is not only by natural decay, but one in general by cancellation or disintegration of design. The generic pattern at the heart of these paintings – echo after echo of Marimekko – provides a structure to work against. The organic forms – as asserted by Matisse – necessitates a stringent system of support lines. Fredrik Værslev's paintings are not only working with nature, but are also paintings of nature where the mark-making gets mapped out and marks turn into maps. They are landscape paintings but with the model's moderation; not necessarily complying to how we physically perceive nature, but how – according to Leonardo Da Vinci in his unfinished treatise Trattato della pittu – are able to mentally construct it: "I shall not fail to include among these precepts a new discovery, an aid to reflection which although it seems a small thing and almost laughable, nevertheless is very useful in stimulating the mind to various discoveries. This is: look at walls splashed with a number of stains or stones of various mixed colours. If you have to invent some scene, you can see there resemblances (similitudine) to a number of landscapes, adorned in various ways with mountains, rivers, rock, trees, plains, wide valleys and hills." These are not paintings of a sublime, nor a pastoral or an entropic landscape. Rather, it is a landscape wedged in between the latter two – a tamed landscape in between row-houses – where the canopy is the only contact surface between architecture and nature other than the equally tamed garden. And where – on other days than those where the weather forecast reads: "19 degrees Celsius. Light breeze. Partly cloudy" – canopies will be swiveled out, and their faded and faltered colours will shine like poorly put on make-up.