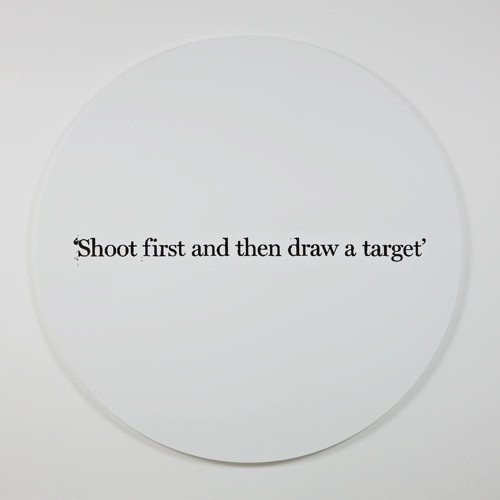 © Gardar Eide Einarsson
Shoot First, 2008
Silkscreen print on circular canvas / wooden stretcher
Diameter: 180 cm
GROUP SHOW
"We never met before, but it's with great anticipation of your understanding that I'm writing you and I hope you will in good faith give a deep consideration to my proposal below."

The exhibition in question, under a hopelessly long title that Eivind Furnesvik pillaged off some poor Nigerians, is an experiment on deceit and desire. The experiment takes as its point of departure how two inadequate categories can be exploited to create a cacophony of enjoyment. It lends itself to a realm occupied, liberated and controlled by various forms of contemporary artistic practice. A realm that is simultaneously immanent to and in-determined by, its entanglement into memorable desires. Because it might be a deceit in artistic practice, that it is as much as anything a radical mode of controlling freedom.

It is with liberation we regard Franz West controlling anal control itself, insuring a space for abstract creativity. The pipe brush works as a footnote that dissolves its figuration and invents a dream by falling flat. It is far from the vibrant voluptuous creativity affirmed by its contemporary older papier-mâché sister. With West we learn how controlling a space is necessary for a level of abstraction that accelerates creativity beyond the space in question. When we posit Hans Peter Feldman’s Golden Shoes, the spikes are blatantly subverting the sign value of the socio-physical level of the sexual shoes. The humour in question is intensively dry. However, the shoes being juxtaposed with their historical lineage, the question is removed to a realm where their concreteness becomes the condition of their abstraction. The lucidity of sexual perception when abstracted from corporal determination excites. We experience a need to go back to Hans Jæger, which post-modern apparition must be Marius Engh. With his primitive appropriation of historical torture instruments, he has achieved a psychophysical form of autonomy from the art-historical values he feeds on. We represent him with a record he found and gave a concrete existence by abstracting its musical potential. It is in a space in-between determinants, he plays his music- The modesty of the frail colour additions and personal habits that brought him the raw material of the piece is framed with precision.

The powerful direct investment and intervention in social organisation Munch could permit himself, is in the contemporary Norwegian decay officially reserved for medical discourses in juxtaposition with the pleasure of continual bathing. Social democracy is in this sense a perfected version of late capitalism. The capacity for exceptions nevertheless remains. We observe that achieving autonomy when appropriating historical forms by primitive local psychophysics, work best under social democracy from the position of a minor art/juxtaposed with a minor social position. The stupid reproductions of capitalist traps on the other hand, must be seen as child’s play: the primary vanity of controlling the mechanisms of limited freedom while separated from the ability to invest directly into the political economy. We are happy to endorse Matias Faldbakken cutting a slice of the social democratic goat cheese while with a certain studiousness inserting it with bad glue onto irrelevant discourses for the sake of gain. However, the letters here vanish, the mutilation of his artistic result displays how the gain takes place someplace else than in its immanence, in a liquid economy, and how it cannot have value without the existence of this mutilating network of economic circulation. Towards the end, it is Gardar Eide Einarsson who provides us with our target, an enjoyment pure and simple. Not falling into the trap of reacting to official economic nihilism with moral obligation, his pleasurable disregard celebrates the futility of our categories.