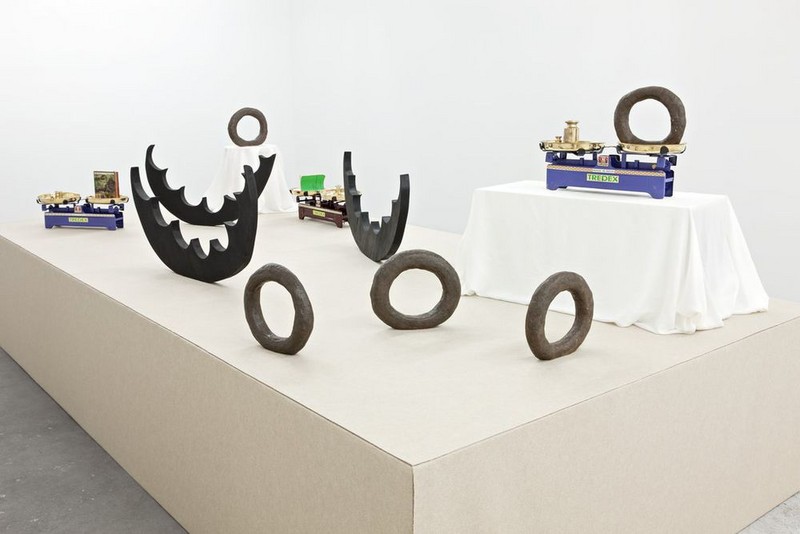 STANDARD (OSLO) is proud to present an exhibition of works by German artist Michaela Meise. On view in the gallery ́s space in Waldemar Thranes gate 86 C, the exhibition will feature recent ceramics sculptures and reliefs as well as wooden sculptures and works on plexiglas. Willingly entitled “Recent Works” the exhibition has Meise scratching the minimalist veneer to reveal the organic and whimsical variances underneath.

“My idea to begin with wasn’t so much to subvert minimalism at all. I realized that I was producing this aesthetic and that I liked it. But I felt that if I left it at that I would just be doing arts and crafts. And yet if I were to say now that I make minimal art, I couldn’t buy that myself, I couldn’t take it seriously. It’s a bit like when teenagers put stickers on doors or items of furniture. It changes the form because the sticker references a different aesthetic. Deutsche Post sells a postcard of a jigsaw puzzle with a piece missing. Alongside it are the words: “I miss you ...”. The same metaphors applies to my work. I add references to the sculptures, references that I haven’t produced but have simply appropriated and used.”
- Michaela Meise (in “Of Archelogical Fields – Michaela Meise in conversation with Annette Maechtel”, 2010)

Among the works included in Michaela Meise ́s exhibition “Recent Works” are three metal balance scales. Illogically non-digital for our times, Meise acquired the scales at a street market in Addis Ababa while doing a residency in the Ethiopian capital. A mere four months later the scales have not only made a move to a carpet-covered podium at the centre of the gallery space in Oslo, but also made a move from their actual function to both function as autonomous sculptures and as pedestals for other sculptures. The weight of any object going into one of the brass plates is counterbalanced by masses in the other – serving as an act of measuring but also reminding of Meise ́s recurring interest in the relationship between sculpture and equilibrium. Her works frequently find themselves discussing this sort of dependency, or as suggested by the writer Manfred Hermes they find themselves “in a state of animated fixity between floating and sinking”.

Balancing on one of the scales are works from a set of five ceramic sculptures. Taking the shapes of rings, the sculptures can both be seen as framing nothing or being something, which is depending upon whether one regards the circling happening around an empty centre or the circle being the object itself. Meise ́s sculptures are thus also balancing in terms of interpretations; inviting both readings that are emphasizing the purely physical, bordering on the mundane, and those that are symbolically ripe, bordering on the metaphysical. Meise ́s interest, however, is exactly this uncertainty or conflicting conclusions, that the circle is the symbol of eternity but also the shape of onion rings. The circle and the motif of balance is also key to the three-part sculpture placed next to them on the podium, entitled “Kiefer”. These stained wooden sculptures are irregularly shaped half circles, that have been humorously made half by what appears to be a gigantic bite. The bite marks to the top giving them the appearances of devoured and discarded pieces of food.

Equally dismantled are the works on plexiglas in the gallery backspace. Each of these five have been made by appropriating, flattening and mounting various boxes for store goods onto sheets of bright green acrylic glass. The three-dimensionality has been reversed for the packing that used to wrap the product. They are not the product, rather they signify the product. Most of these are hence characterized by a graphic reduction that also increases the clarity of function: the box of salt is white and blue while the box for candles have clumsy computer-generated drawings of candles on the side. Accompanying these are three ceramic reliefs, portraits of imagined women, signed in wet clay by sgraffito technique. Two women bear a cross on their foreheads. One of them is talking on her cell phone, the other wears glasses. They are metropolitan women from Addis Ababa, the tattooed cross is a trace from their past in the rural areas, and indeed “Frau III” was made from ethiopian clay and fired in Addis Ababa. The locally crafted is here juxtaposed with the traces of the globally consumed, with a flattened Starbucks coffee cup hanging on the opposite wall.