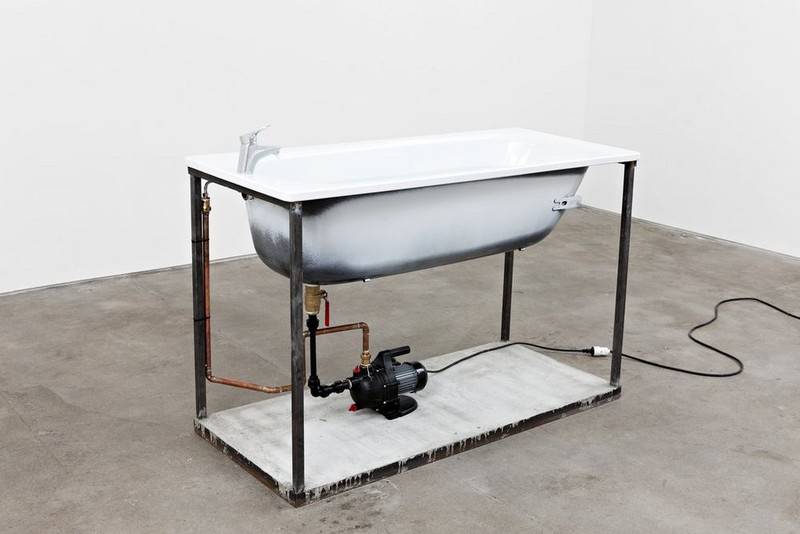 STANDARD (OSLO) is proud to present an exhibition of new works by American artist Oscar Tuazon. Entitled "I Never Learn", the exhibition presents a group of new sculptures and a work from his series of plaster reliefs. Made of galvanised steel, concrete or plaster, the works offer a reflection upon contradictory spatial approaches to the gallery space, either questioning their support and their relation to the space or determined by the architectural prerequisites of the rooms.

“I wrote the first sentence—"If Dad hadn't shot Walt Disney in the leg, it would have been our best vacation ever!"—and the rest was automatic.”
- John Hughes, Foreword to “Vacation '58”

You learn to drive then you drive to learn. Gatsby and Kennedy would both confess: you don’t return the same from a drive. The tale of the American automobile is one serving both as a tool of transportation and a tool of transformation. It revolutionized mass production, it created mass mobility and it re-created the country's physical landscape. Laying the land open, and offering a chance to leave people, places and problems behind, and offering equal chances of new problems. As it has been said: there are no clean getaways.

This is a list of some of those who hit traffic and / or trouble:

- That kid in “The Shining” (no engine, but not of importance either)
- Jackson Pollock
- Hummer
- Michael Douglas in “Falling Down” or Dudley Moore in “Crazy People”
- John Candy in “The Blues Brothers” (being inside a truck)
- Cyndi Lauper or Roy Orbison (driving all night)
- Mel Gibson (driving when he shouldn’t)
- J Dilla (driving even more reckless)
- OJ Simpson (even if having the lane cleared for him)
- Jayne Mansfield or General George S. Patton
- Jordan in “The Great Gatsby” (“I am careful.” / “No, you’re not.”/ “Well, other people are,” she said lightly. / “What’s that got to do with it?”/ “They’ll keep out of my way,” she insisted. “It takes two to make an accident.”)