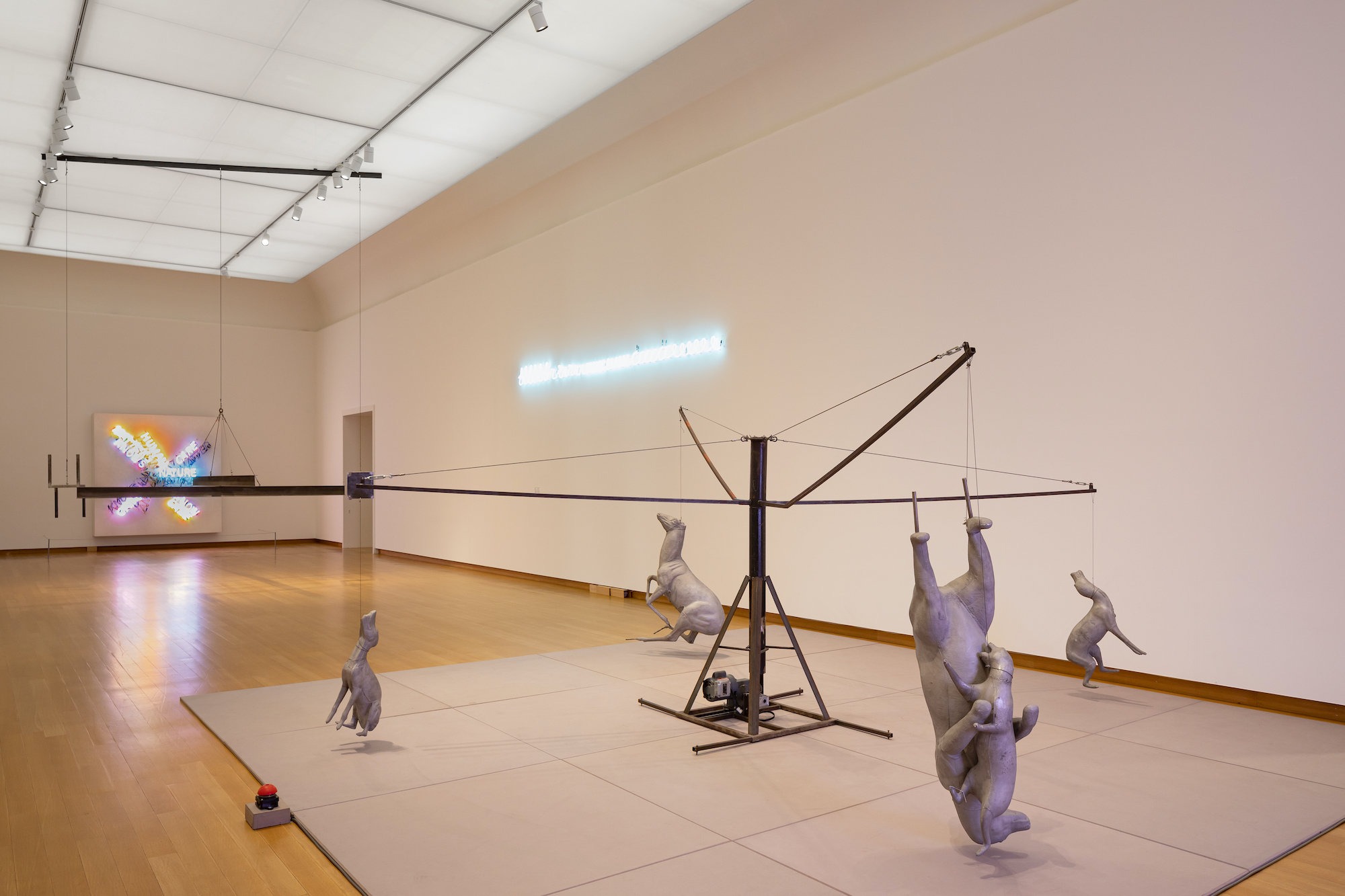 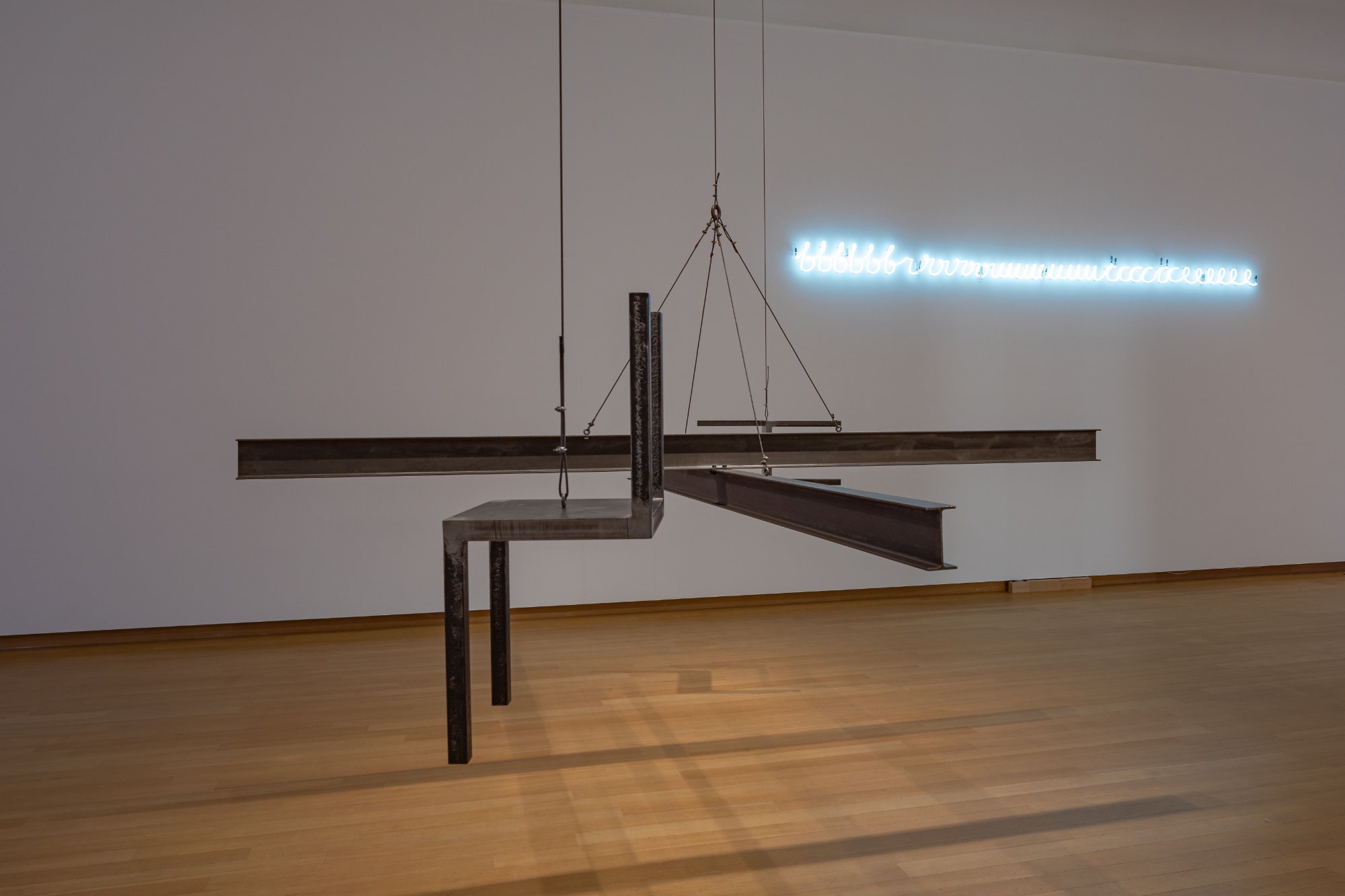 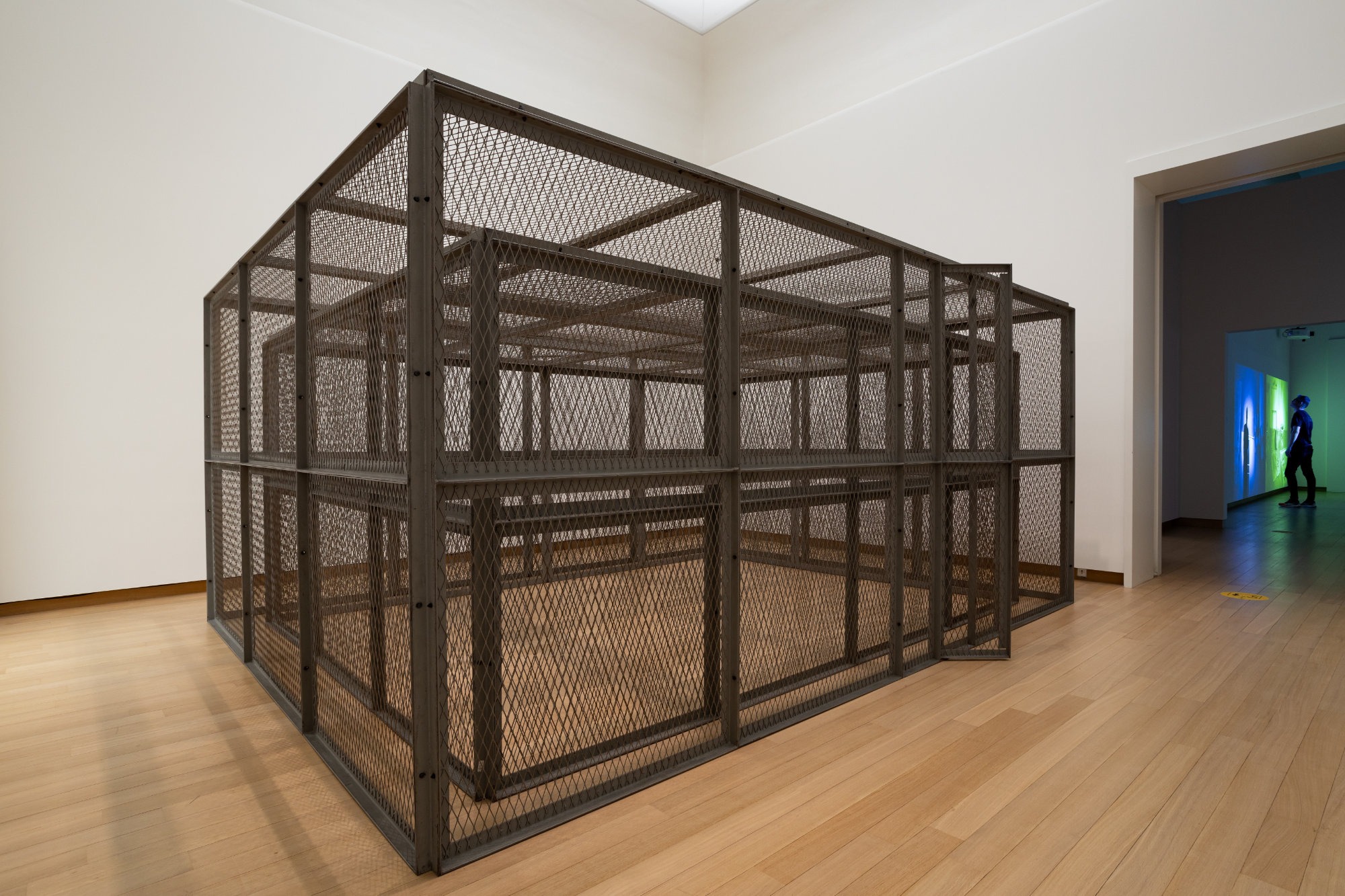 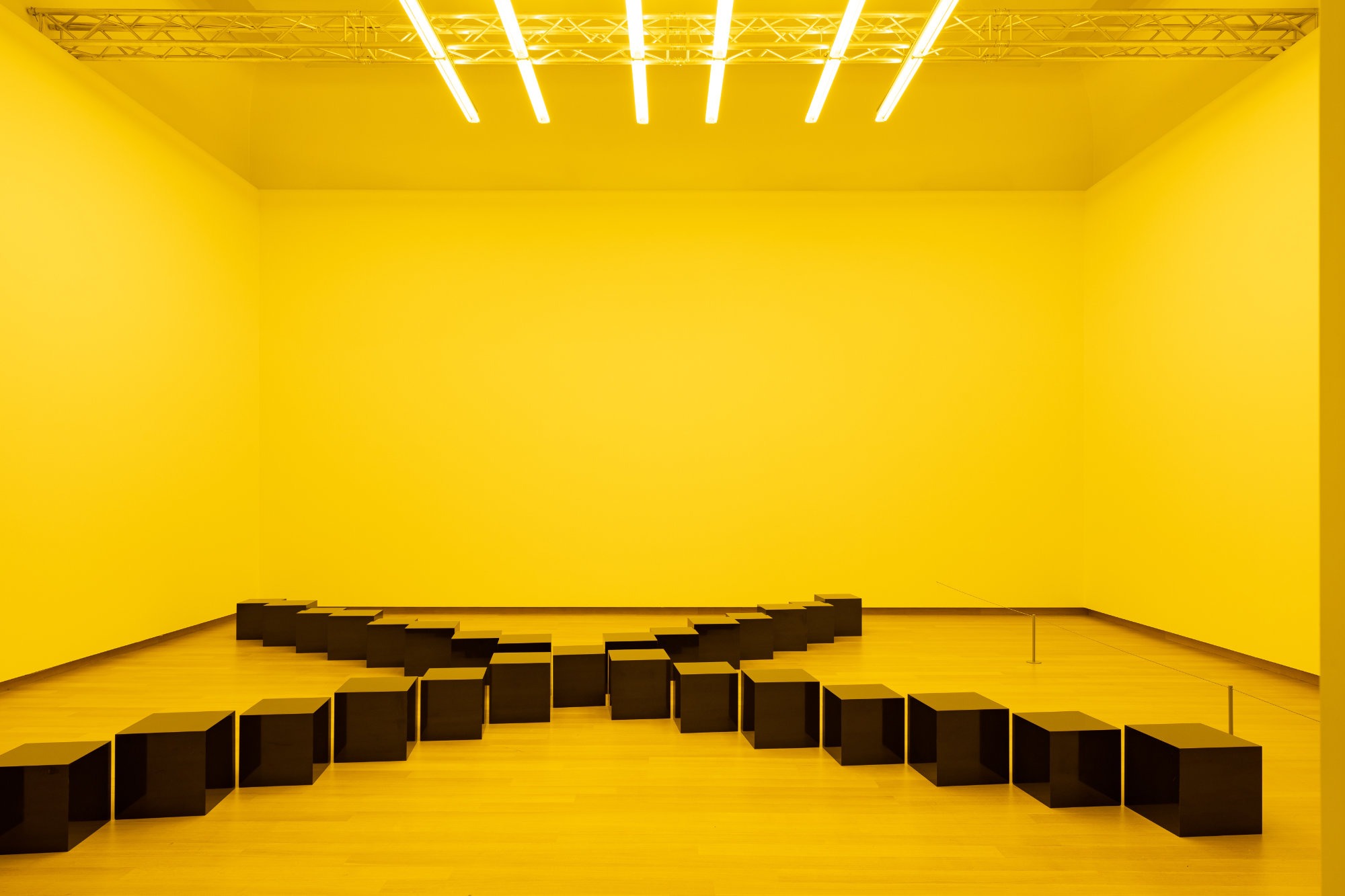 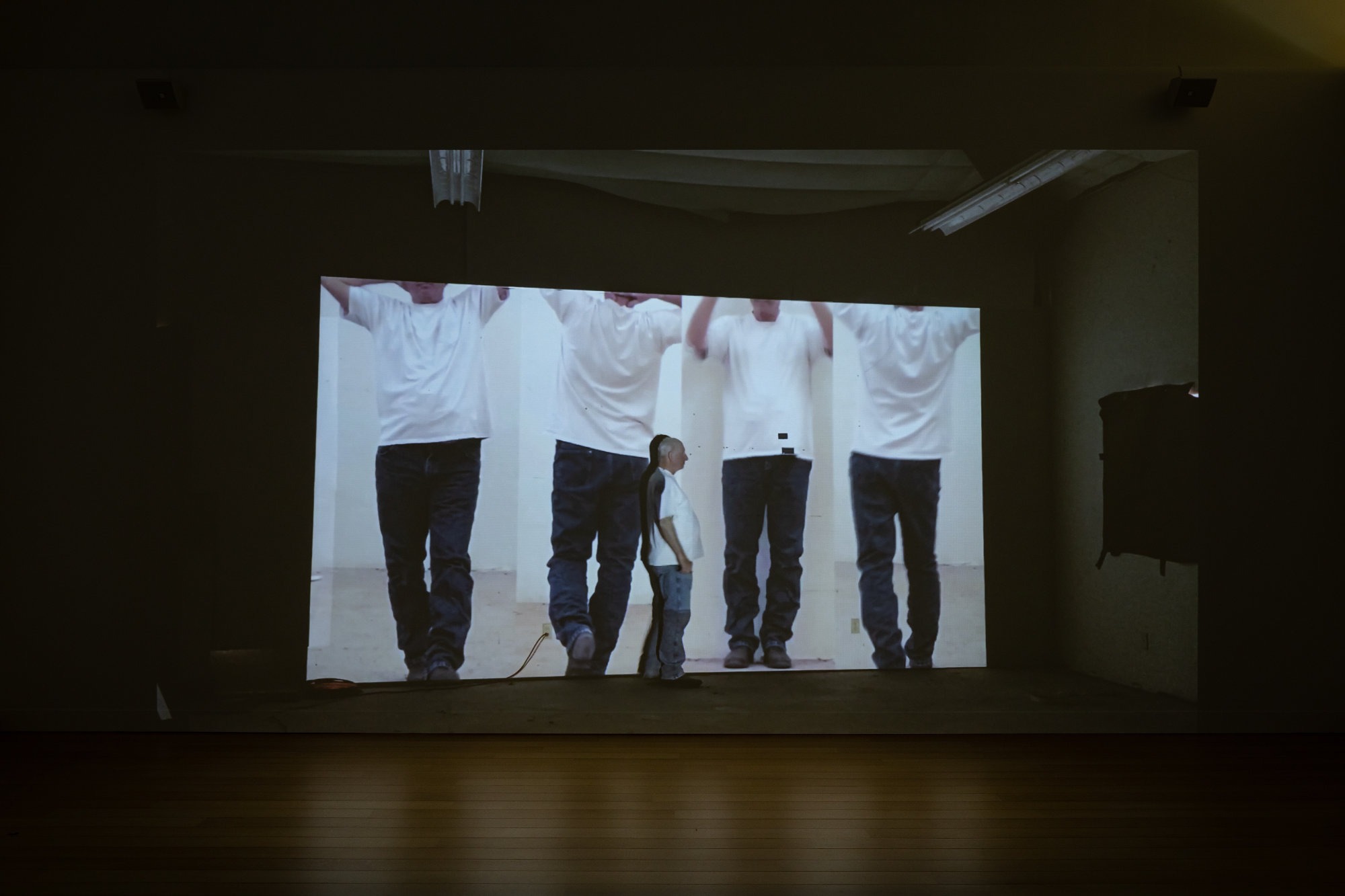 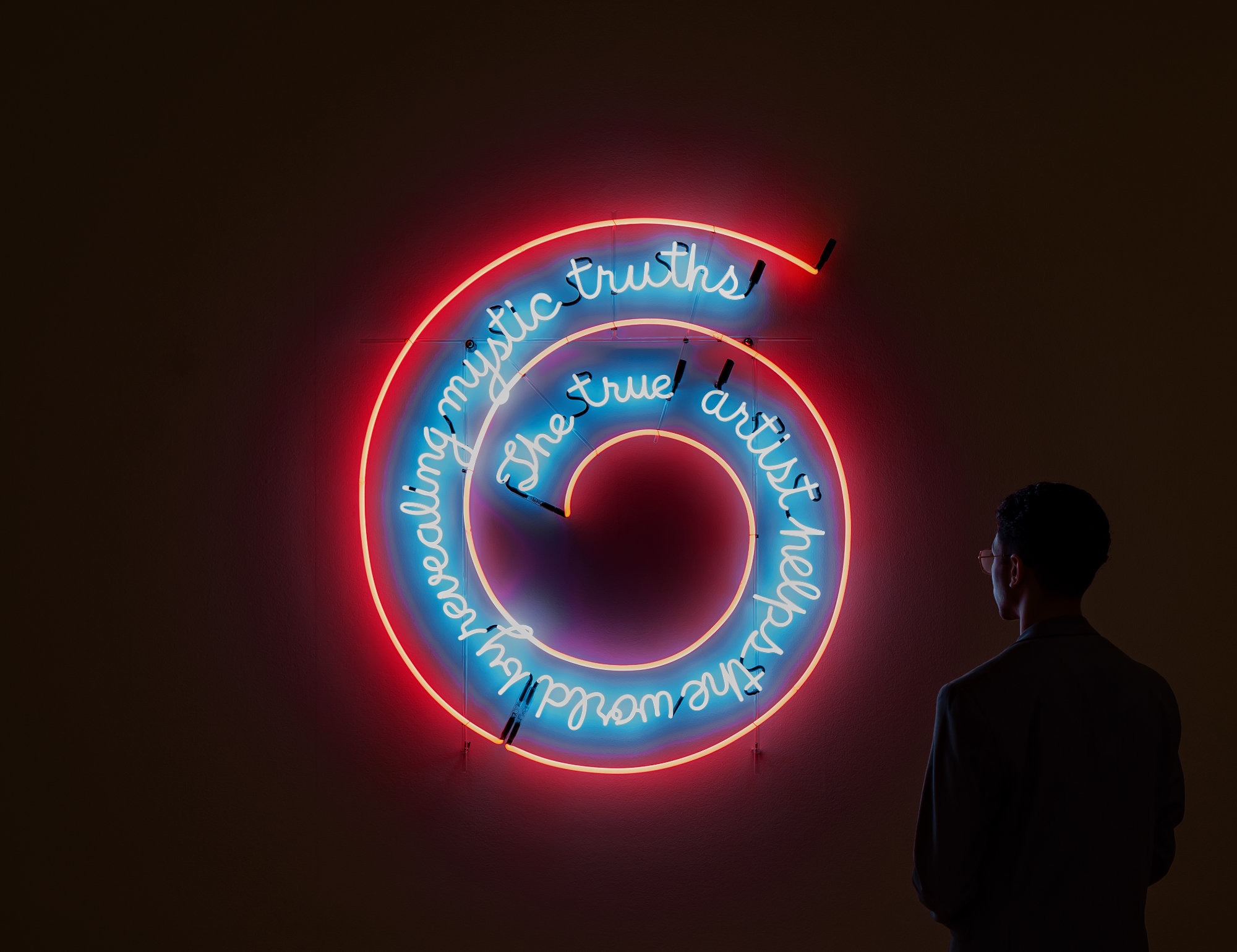 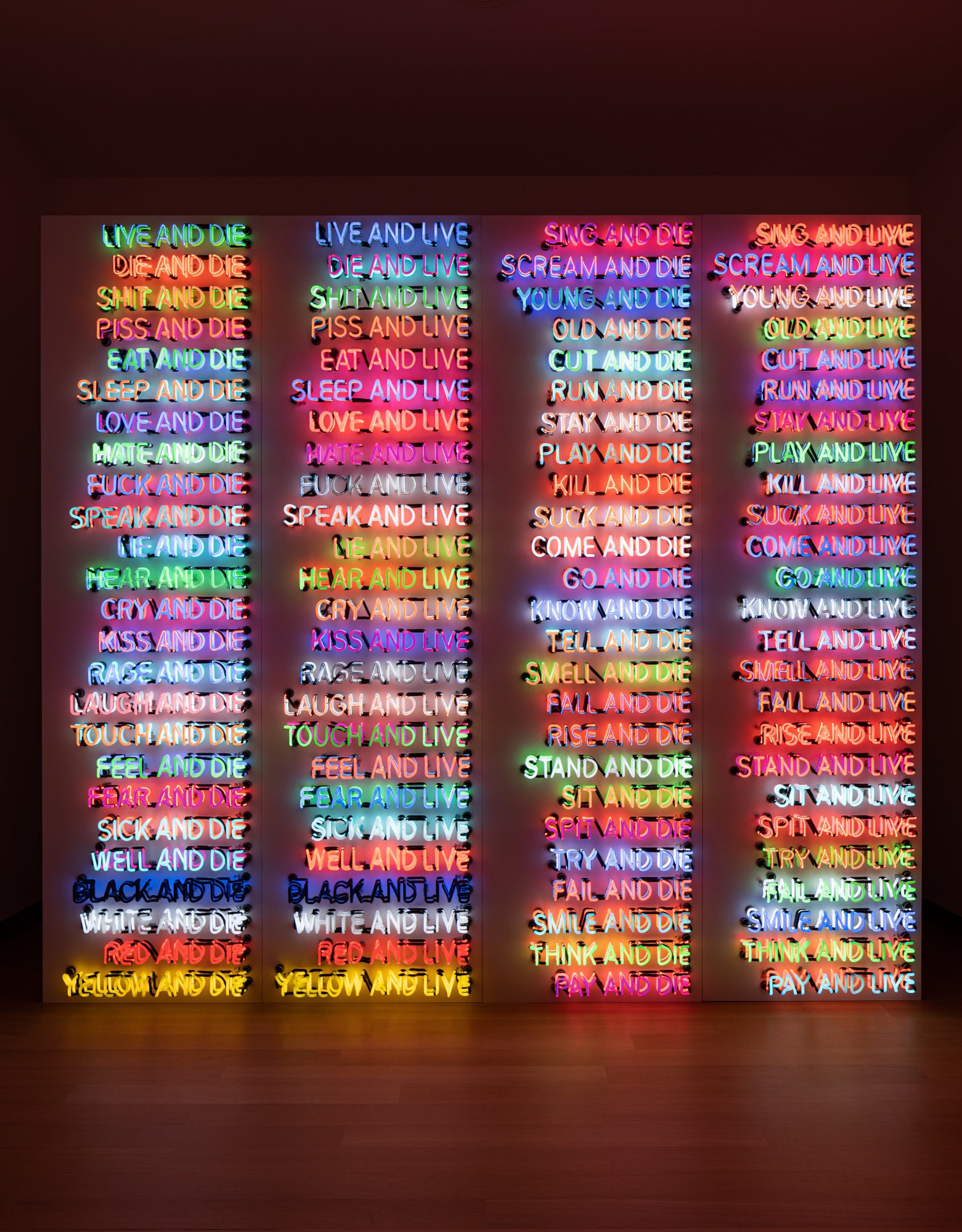 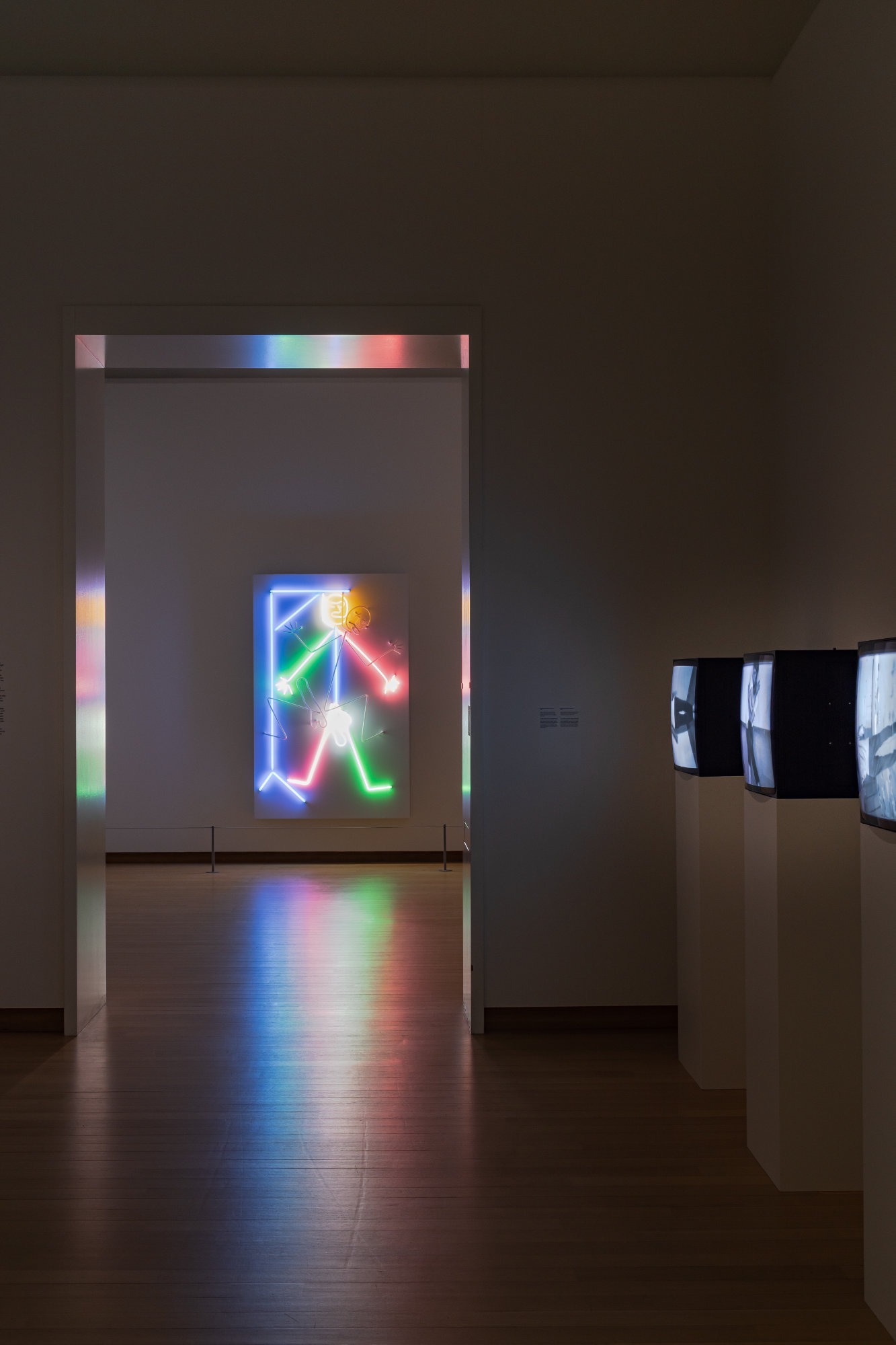 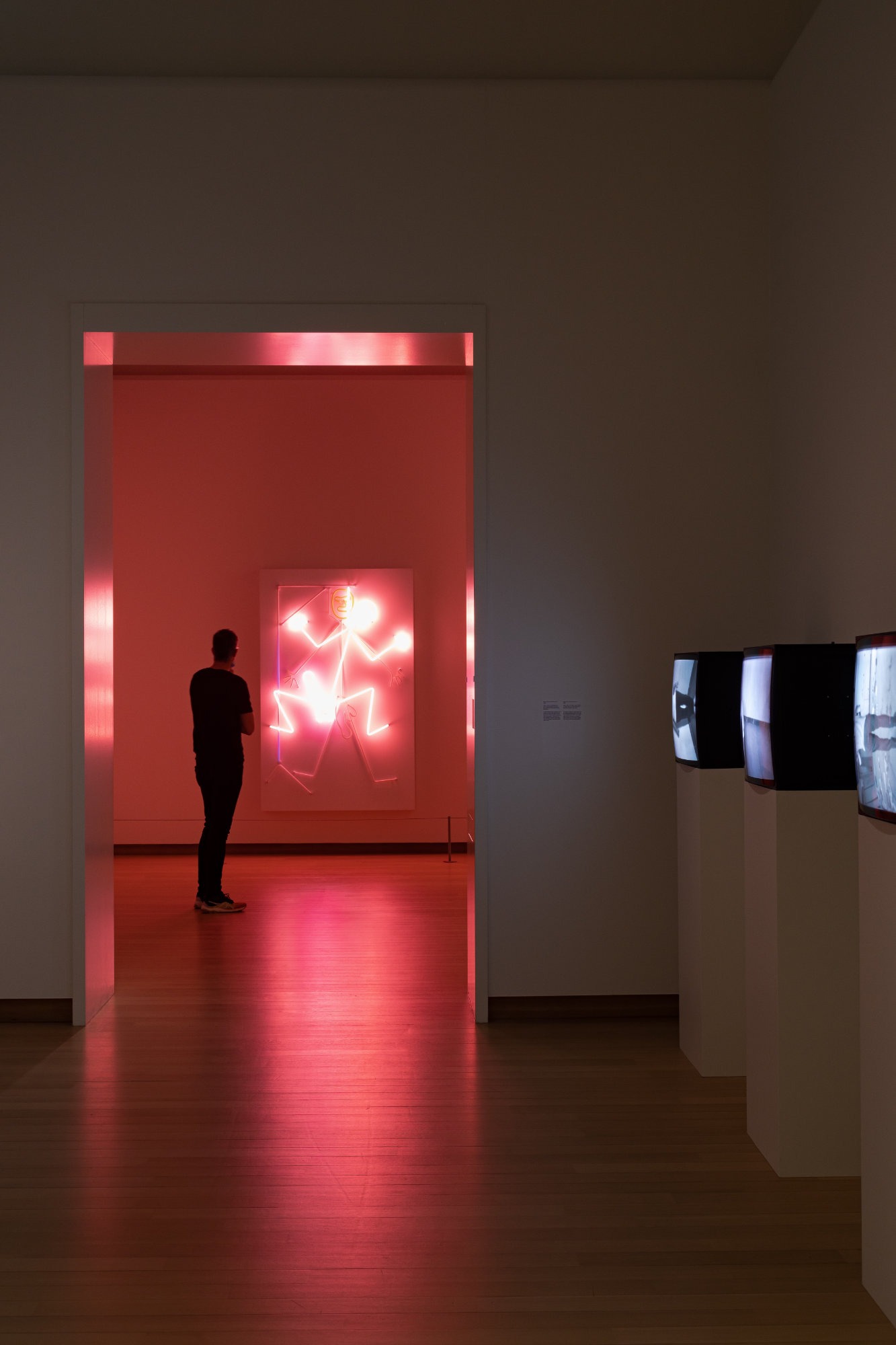 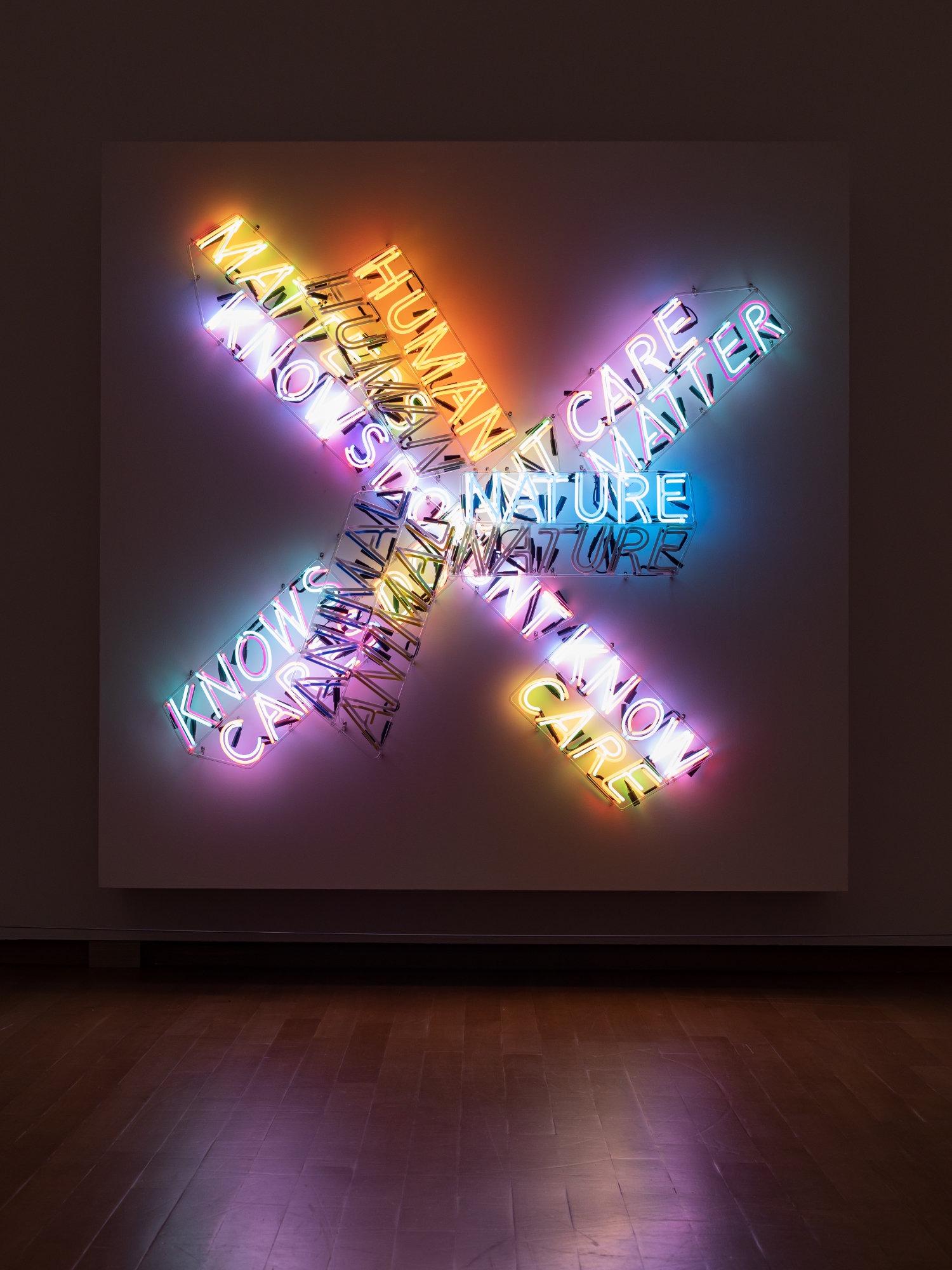 Installation view: Bruce Nauman, Stedelijk Museum Amsterdam, 2021, photo: Peter Tijhuis
In collaboration with Tate Modern, the Stedelijk Museum presents the largest overview of the American artist Bruce Nauman in the Netherlands up to now. This exhibition spans a period of more than fifty years. The selection includes works that have rarely or never been shown, works that propelled his creative focus in a new direction and spatial works that invite the viewer to share in an immersive experience.

The Stedelijk Museum presents a comprehensive overview of the American artist Bruce Nauman. For over fifty years, Nauman has continually tested and reinvented what an artwork can be. His use of an eclectic range of media and unbridled urge to experiment makes him a key figure within art today. Nauman is an important source of inspiration and a benchmark for younger generations of artists. His interest in ambiguity and shades of meaning relates to everyday human experience, where certainty is not always guaranteed. The exhibition reflects Nauman’s preoccupation with themes such as the body, language, control, and the artist’s studio. Nauman’s work is disruptive, penetrating, absurd, and playful, and is often a physical as well as mental experience.

EXPANDING BOUNDARIES
Since the 1960s, Bruce Nauman (1941) has been reshaping the boundaries of art. For Nauman, everything starts with an idea, which can take shape in many ways—as a sculpture, text, sound, neon light, or filmed action or interaction. In the late 1960s, when neon lighting was exclusively used in advertising signage, Nauman embraced this visually appealing, entrancing medium in his art. He often plays with the formal and psychological nature of language, with works that contain puns, anagrams, or palindromes, such as Eat / Death (1972). Nauman also frequently uses his own body, elevating the most commonplace actions to art, like in the video installation Washing Hands Abnormal (1996). Driven by the question of what it means to be an artist, he physically explores the boundaries of his studio in several video works, to conclude that everything he does in that space must be art.

CONFRONTING
Nauman engages with major themes in his work that affect many: life, death, sex, love, violence, frustration, and helplessness. His commentary on the human condition is at the very heart of his oeuvre and leads to confrontational images and messages. For example, the monumental neon work One Hundred Live and Die (1984) consists of ultra-short one-liners that flicker on and off, one by one, which can be read as an ever-changing series of declarations about life and death. Death also permeates the sinister Carousel (1988), in which a steel merry-go-round from which gray animal carcasses are suspended jerkily rotates, dragging the creatures along the floor. The colorful neon work Seven Figures (1985), on the other hand, looks cheerful, and yet the figures performing sexual acts in an endless repetition move so mechanically and monotonously, stripped of any erotic tension, that the effect is both hilarious and discomfiting.

ABSURD AND DISRUPTIVE
Bruce Nauman’s work is disruptive—he plays with expectations and perceptions. Many of his works invite interaction. Visitors can enter the labyrinthine Double Steel Cage (1974), and are obliged to keep moving in order to catch a fleeting image of themselves in Going Around the Corner Piece with Live and Taped Monitors (1970). Movement is also essential to read the text of The True Artists Helps the World by Revealing Mystic Truths (1967). Which raises the question, does Nauman actually mean this statement to be taken seriously, and do we agree? At times, Nauman’s work is also tragicomic and absurd, like Clown Torture (1987), one of his earliest and best-known video installations. A clown performs a series of repetitious actions in a variety of situations that always end in failure; the work gradually transforms slapstick humor into horror. Black Marble Under Yellow Light (1981–1988) is physically disorienting and challenges visitors’ perceptions. Are the marble blocks and floor in this space level or not?

One of the central themes in Nauman’s oeuvre is repetition, which appears in his work as endless movements, loops, and rotation. The artist also often returns to his earlier works in new artworks. Walks In Walks Out (2015), the exhibition’s most recent piece, references his studio walks of the 1960s.

BRUCE NAUMAN AND THE STEDELIJK
Both museums and private collectors in the Netherlands purchased work by Bruce Nauman early in his career. As a young artist, he participated in the groundbreaking group exhibition Op losse schroeven (1969) at the Stedelijk, on which occasion the museum acquired the neon work My Name as Though It Were Written on the Surface of the Moon. The Stedelijk continued to collect his work; in the mid-1990s, Rudi Fuchs added a number of important pieces to the collection, such as Seven Figures, Setting a Good Corner and Washing Hands Abnormal.

ABOUT THE EXHIBITION
Following previous exhibitions, which focused on specific parts of his oeuvre, this is the largest overview of Bruce Nauman’s work in the Netherlands to date. The exhibition consists of more than forty works, including several large, room-filling (video) installations. The selection includes works that have rarely or never been shown and traces the central themes that characterize Nauman’s oeuvre. The emphasis is on works that propelled his creative focus in a new direction and spatial works that invite the viewer to share in an immersive experience.

CATALOGUE
The survey is accompanied by a publication that includes introductory essays and a conversation between Bruce Nauman, Nicholas Serota, former director of Tate Modern, and Andrea Lissoni, former curator International Art (Film) Tate Modern, both of whom co-curated the exhibition. (NL/EN, 176 pp, Tate Publishing, ISBN 978-90-500621-4-5)

The exhibition Bruce Nauman is organised by the Stedelijk Museum Amsterdam and Tate Modern, London in collaboration with Pirelli Hangar Bicocca, Milan.