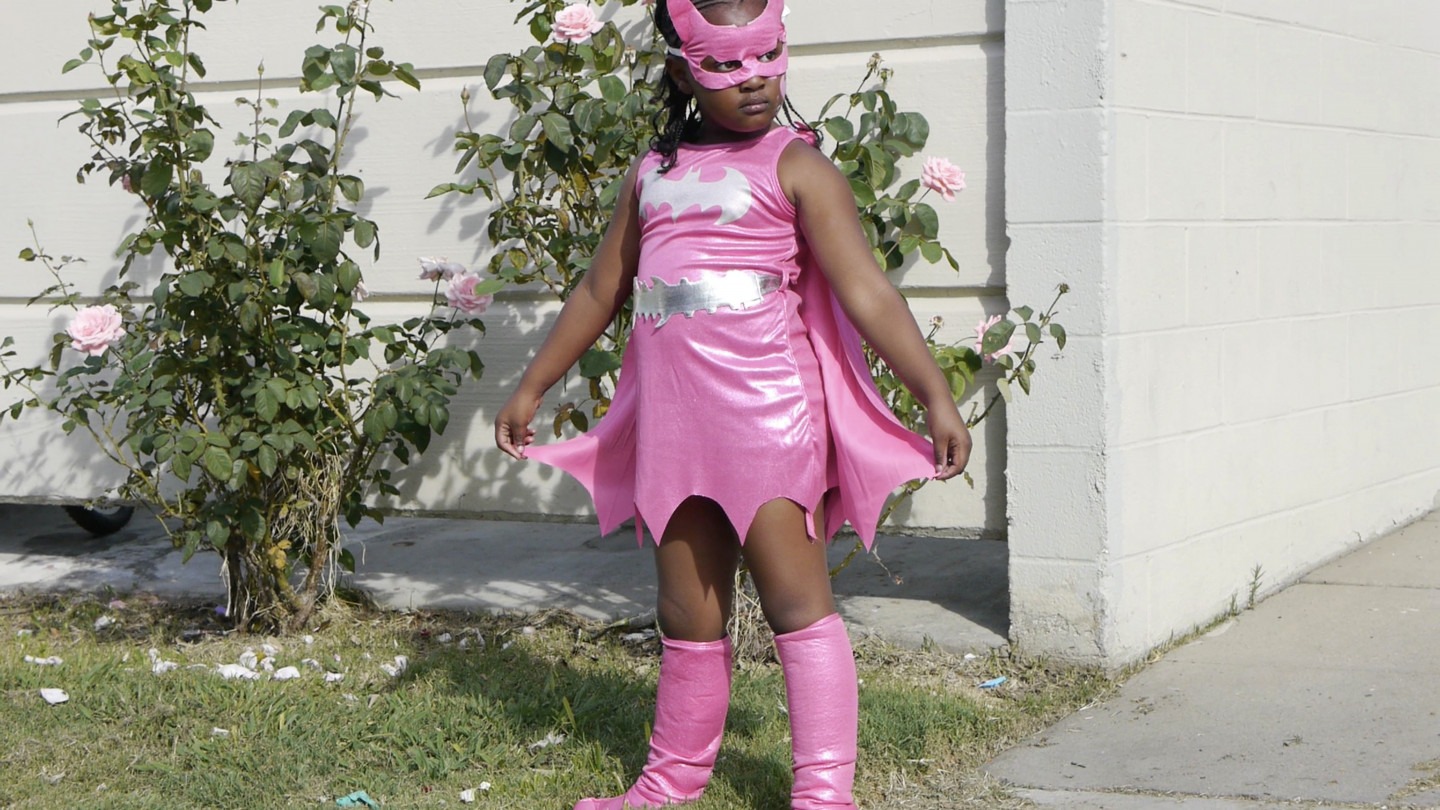 Imperial Courts (2015) by the Dutch photographer Dana Lixenberg is a three-channel video installation that captures everyday life in Imperial Courts, a public housing project in Watts, Los Angeles. It is Lixenberg’s first video work and was purchased by the Stedelijk in 2017.

The 69-minute video triptych immerses the viewer in life on the streets of Imperial Courts. An area notorious for its gang-related violence, Lixenberg’s scenes present the community in a very different light. She documents lazy afternoons; parties when the entire neighbourhood comes together to celebrate a local youth’s graduation. Another scene features women discussing fast food while braiding each other's hair. By interweaving images of celebration and banality, the film’s rhythm mirrors the pace of daily life.

Lixenberg shows us a singularly close-knit and resilient community and, in her typically understated style, challenges stereotypical representations of the neighbourhood. But in doing so, Lixenberg never glosses over the problems of Imperial Courts; tensions are subtly present in the ominous rumble of low-flying police helicopters and in the footage of modest monuments commemorating local victims of gun violence.

IMPERIAL COURTS 1993-2015
The video Imperial Courts grew out of Lixenberg’s long-term photography project for which she revisited the neighbourhood many times between 1993 and 2015. She started the project as a way of countering the media’s one-dimensional, sensationalised coverage of South Central L.A., particularly during and in the aftermath of the Rodney King riots of 1992. Lixenberg gradually won the trust of the residents of Imperial Courts, and photographed them in black and white, using a large-format camera. Free of social stereotyping and moral judgements, the series offers a compassionate, dignified portrayal of the people in this small community. Lixenberg maintains a respectful distance, and yet the portraits convey the intimacy of the moment shared by the photographer and the person in front of the lens.

Both a portrait of and an ode to the community, the project culminated in the book Imperial Courts 1993—2015. The publication was awarded the prestigious Deutsche Börse Photography Foundation Prize and the Dutch Photo Book Award. In 2012, Lixenberg also began making video recordings in Imperial Courts. This added new layers to her portrait of the community: colour, movement, the slow passage of time. The sounds draw us still deeper into the world of Imperial Courts: hip-hop and salsa, the shrill chimes of an ice cream van, the ever-present murmur of the highway and, of course, the voices of the residents.

ABOUT DANA LIXENBERG
Lixenberg often works on projects with a focus on underserved communities such as Jeffersonville, Indiana (2005), a series of portraits of the town’s homeless population. The Last Days of Shishmaref (2008) centers on an Inupiaq community whose island off the Alaskan coast is gradually being swallowed by the sea. She has also worked for leading titles such as The New Yorker, The New York Times Magazine, VIBE and Newsweek, photographing many American celebrities, including Jay-Z, Aaliyah and Donald Trump. Lixenberg's portraits of rappers Tupac and Biggie have gone on to achieve iconic status and are the subject of her most recent publication Tupac Biggie (ROMA Publications, 2018).

Dana Lixenberg studied at the London College of Printing and at the Gerrit Rietveld Academie. Like Bertien van Manen, whose work is being shown at the same time in the Stedelijk, Lixenberg builds close relationships with her subjects and spends years documenting their lives. Her working method, however, is very different: Lixenberg approaches her subject with observation and distance, uses a large format camera and strives for ultimate sharpness.

As well as being exhibited widely, many of her projects have been presented in book form. Her work is represented in numerous Dutch and international museum and corporate collections including those of the Deutsche Börse Photography Foundation, Stedelijk Museum Amsterdam, Huis Marseille, Kunstmuseum Den Haag, and the Rijksmuseum.