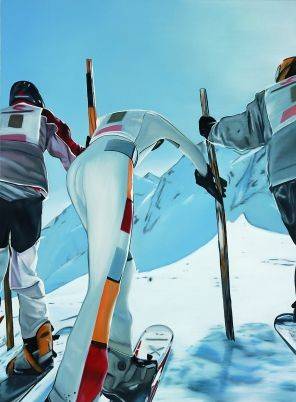 Havekost is one of a new generation of painters who use the digitalised, multimedial visual language in their work.
Opening: Thursday, March 9, 5 p.m.

This spring Stedelijk Museum CS is devoting attention to the painter Eberhard Havekost (b. Dresden, 1967). He is known for his ‘cool’ manner of painting and the way in which he analyses and transforms diverse visual subjects from modern media into images that once again demand our attention.

In his work Havekost focuses on both formal aspects such as colour or texture, or the cropping of a photographic image, and on subjects that are connected with current experience, referring to our visual environment (objects, architecture) or relating to our ‘consumption industry’. In addition he uses photographs that he makes of his girlfriend or playing daughter as subjects for his work. About 100 works by this German painter will be seen in Stedelijk Museum CS.

‘All painters, everybody, ought to paint from photographs’, proclaimed Gerhard Richter in 1966 in an exhibition catalogue that he wrote together with Sigmar Polke. A century before that painters such as Édouard Manet and Edgar Degas had been fascinated by the photographic image, and Richter’s call for using photographic material (including the importance of the selection process) is now also being followed by Eberhard Havekost.

He draws his images from a digital databank which enables him to manipulate them and possibly combine them with other images. For all of the photographic material selected – an increasingly large part of which he has photographed himself – there follows a process in which he analyses the images and investigates specific qualities in them. In doing this, he poses the question for himself of to what degree the digital (and sometimes modified) images lend themselves for the medium of painting.

Among the subjects which regularly recur are nature, portraits or figures, architectural interiors and exteriors, and means of transportation such as caravans, aeroplanes and automobiles. Some of the motifs appear neutral, such as the series of façades of monotonous apartment buildings; others are grimmer, such as the portrait of an American soldier in which the face has been partly mutilated. The façades of the apartment buildings and objects often project a faceless modernity, and in some of his portraits the impersonality and clichédness of the person represented is palpable.

In the exhibition in Stedelijk Museum CS the paintings are clustered around particular themes such as architectonic façades and interiors, figures, automobile wrecks and still lifes. A large proportion of the 100-some paintings were to be seen earlier this year in the exhibition ‘Harmony’ in Kunstmuseum Wolfsburg, but thirty new works have also been selected.

Havekost is one of a new generation of painters who use the digitalised, multimedial visual language in their work. His work has been included in various private collections, such as the Saatchi collection, London, the Sammlung Goetz, Munich, the Sammlung Reingold, Düsseldorf, and the Sammlung Marx, Berlin, and in recent years he has participated in diverse important group exhibitions.

Solo presentations of relatively young painters are no rarities at the Stedelijk Museum. In the past presentations of Thomas Scheibitz, Franz Ackermann, Robert Zandvliet and others have been seen, and rather recently also of Michel Majerus. Work by these painters has been purchased for the Stedelijk collection, along with work by Sarah Morris, Frank Nitsche, Neo Rauch and others.

The Havekost exhibition thus continues in a direction that has already been set out, and will certainly be continued in The Vincent 2006 – which will be showing the work of Wilhelm Sasnal – and other exhibitions. Sasnal’s work was previously seen at the Stedelijk in the exhibition ‘Time and Again’ (2004).
In 2002 the Stedelijk Museum purchased a work by Eberhard Havekost.