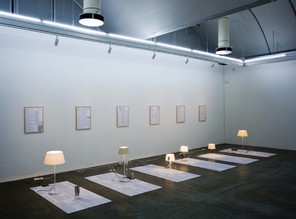 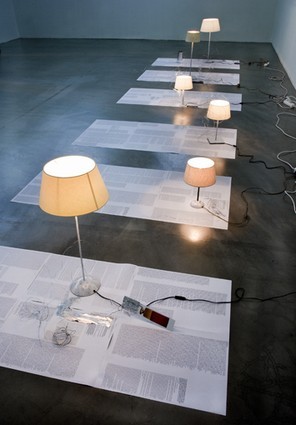 Docking Station, the project space at Stedelijk Museum CS, presents Voices and Substitutes: the first ever Dutch exhibition of work by Josef Strau (b. 1957, Vienna).

Since the late eighties Strau has experimented variously with the social roles of gallerist, curator, writer, musician and artist. His many metamorphoses make him difficult to fit into any of the usual art world categories. In Germany, his activities have made him a cult figure and he has influenced a whole generation of artists.

Strau’s experimental artistic practice is rooted in the written word. Initially his writings took the form of articles for catalogues and art journals; later they became autonomous narratives presented in the form of books and posters in the context of exhibitions. Over the last two years, Strau has been creating ‘narrative spaces’ in which he relates texts to objects and examines the way text relates to the three-dimensional medium of the exhibition. A reference point in this respect is Daniel Libeskind’s 2001 Jewish Museum in Berlin, a building in which text and architecture join hands to open up new metaphorical, literary and imaginative possibilities.

Strau ́s texts are rapidly written, unpredictable and ever-changing. Sometimes plucked out of the air in a style reminiscent of the Surrealists’ ‘écriture automatique’, sometimes based on earlier written materials. In Amsterdam, his installation will be created around six text posters which will lie on the ground in piles for visitors to take away with them. Each of the posters will represent a particular person or figure, such as Schopenhauer or Libeskind.

Strau will use wire to weave three-dimensional structures in which his textual elements merge with objects like lamps. Strau has sometimes linked these narrative installations to the Confessions of Jean-Jacques Rousseau. This twelve-volume biographical work recounts the eighteenth-century philosopher’s entire life since childhood – complete with all the painful experiences, emotions and thoughts that are part of growing up. Strau’s texts likewise reflect the artistic conditions under which his objects are created and include countless references to his personal life.

Josef Strau first attracted public attention in the late eighties to early nineties with the Friesenwall project space he created in Cologne together with Stephan Dillemuth. The programme gained a reputation for launching new artistic ideas quickly and with a minimum of red tape. Strau himself celebrated a ‘non-productive attitude’: he lived the life of an artist without intending to produce objects of commercial value.

In 2002 Strau set up the Meerrettich Gallery in Berlin, a glass pavilion on the Rosa-Luxemburg-Platz where he presented performances, events, exhibitions and installations by artists like Jutta Koether, Isa Genzken, Josephyne Pride and Bernadette Corporation. The programme attracted a host of fans who attended the many happenings at the place on a more or less daily basis. In late 2006, Strau shut the gallery down, partly because he didn’t want the programme to become hackneyed and partly in order to devote himself full-time to his own artistic practice.

Strau’s most recent solo presentations are Don’t Climb The Pyramids at Greene Naftali in New York (2006) and Voices at the Buchholz Gallery in Cologne, an exhibition which opened on 26 October this year and is the counter part of Voices and Substitutes at the Stedelijk Museum. Strau has also taken part in group exhibitions at the Secession, Vienna, Portikus, Frankfurt and White Columns, New York.

On 13 November, Josef Strau gave a talk at the Ateliers, Stadhouderskade 86, Amsterdam, in collaboration with the Stedelijk Museum.
www.stedelijk.nl