Kazimir Malevich and The Russian Avant-Garde 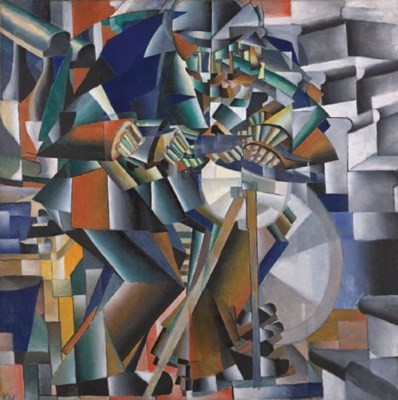 The Stedelijk Museum Amsterdam holds the largest collection of Malevich’s work outside of Russia, which was the subject of a large-scale exhibition at the museum in 1989. Kazimir Malevich and the Russian Avant-Garde is a tribute to the artist and his contemporaries, as well as the culmination of 2013 as the year celebrating Dutch–Russian relations in the Netherlands.

CO-PRODUCED WITH
The exhibition is co-produced with Tate Modern, London, and the Art and Exhibition Hall of the Federal Republic of Germany (Bundeskunsthalle), Bonn, where it will travel in 2014. Each venue explores Malevich’s rich career from distinctive vantage points, focusing on different aspects of the artist’s remarkable career, including the context in which he formed his unique language, the radicality of his artistic trajectory, and his later return to landscapes and figures. Seen in their totality, these exhibitions thus provide the unprecedented opportunity to reassess one of the defining figures of twentieth-century modernism.

Organized by Stedelijk Museum curators Geurt Imanse and Bart Rutten, the Stedelijk’s presentation of more than 500 works places Malevich within the context of his contemporaries.

Not only an artist, he was an influential teacher and a passionate advocate of the “new” art. The show is a tribute to the Russian avant- garde of the early 20th century, with Malevich as its focal point. Although best known for his purely abstract work, he was inspired by diverse art movements of his day, including Impressionism, Symbolism, Fauvism, and Cubism; his own visual language was also influenced by Russian icon painting and folk art. Through oil paintings, gouaches, drawings, and sculptures, the exhibition traces the rich variety of his oeuvre. All the phases in Malevich’s career will be on view, from his Impressionist period to his iconic Suprematist phase—his Black Square was its most radical consequence—to the lesser-known figurative works that followed.

COLLECTIONS KHARDZHIEV AND COSTAKIS
Kazimir Malevich and the Russian Avant-Garde will unite the exceptional collections of Nikolai Khardzhiev (via the Khardzhiev Foundation under the stewardship of the Stedelijk) and Georges Costakis (housed by the State Museum of Contemporary Art, Thessaloniki) for the first time. Pioneering Russian collectors of the Russian avant-garde, Khardzhiev and Costakis assembled considerable holdings of works during a time when abstract art was forbidden in the Soviet Union.

WORKS ON PAPER
Works on paper offer vital insights into Malevich’s artistic development. Recent research—in which the Stedelijk Museum played an important role—reveals that it is in his drawings that we can follow his artistic quest in the best possible way. Never before have so many Malevich works on paper— mostly from the Khardzhiev Collection—been on public display together.

MILESTONES
The exhibition celebrates a number of milestones. It was precisely one hundred years ago that the experimental Cubo-Futurist opera Victory over the Sun (1913) was performed, for which Malevich designed radical, non-realistic sets and costumes. The opera was a turning point in the artist’s career, marking his first experiments with total abstraction. Moreover, it has been ninety years since the first major exhibition of Russian nineteenth- and twentieth- century art—the first Russian Art Show, including work by Malevich—was on view at the Stedelijk Museum; the Stedelijk was the first museum to present Malevich’s Suprematism outside of Russia. In addition, Kazimir Malevich and the Russian Avant-Garde is the artistic culmination of 2013, a year celebrating Dutch– Russian relations.