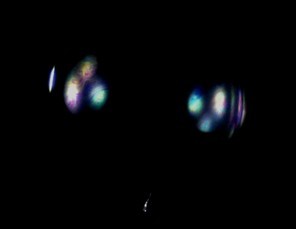 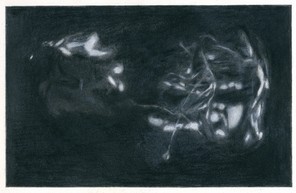 Docking Station – the project space for emerging art at the Stedelijk Museum CS – is opening the cultural season with the première of E.S.P. (2007).

The latest film by Melvin Moti (b. 1977, Rotterdam) combines hypnotically slow-moving images of a bursting soap bubble with the story of the dream logs kept by J.W. Dunne, a British military officer endowed with paranormal powers.
The artist has been awarded the J.C. van Lanschot Prize for the Visual Arts for this project.

E.S.P. is the result of a lengthy preparatory process. Moti produces relatively little work and pays a great deal of attention to documenting and researching his subjects. Coordinates in his research process are time, history, memory, psychological experiments and paranormal phenomena. For example, the subjects of earlier works were a memory-based guided tour of the galleries of the Hermitage following their wartime evacuation (No Show, 2004), the automatic writing experiments of the Surrealists (The Black Room, 2005) and the life of the 19th-century spirit materialisation Katie King (Katie King, 2005).

The title of Moti’s new 35mm film, E.S.P., refers to the paranormal Extra Sensory Perception movement of the 1930s. The scenario is based on the figure of John William Dunne (1875-1949), who displayed precognitive powers and recorded them in his ‘dream logs’. Dunne was an aeronautical engineer in the British army. At the age of eighteen he discovered that fragments of his future were appearing in his dreams. In 1927 he published a book entitled An Experiment with Time, in which he describes his dreams as experiences of time in which past, present and future occur simultaneously.

In a monologue written by Moti, a compelling male voice talks in the first person, in English, about J.W. Dunne’s dreams and daydreams; about how he records his dreams on waking and how this gives him an insight into his own future. It is a narrative concerning human consciousness, the experience of time, speed, and the pursuit of an impossible goal: the ability to see into the future.

In films like No Show and The Black Room, Moti plays a sound track against the visual background of a mesmerizing, slow-moving image. E.S.P. has a similar structure, in which the image is made to resonate with the spoken narrative. The viewer watches a soap bubble bursting in extreme slow motion. To achieve this effect, Moti worked with a firm in Munich that manufactures special cameras for use in studying phenomena like the impact of bullets. The camera can slow images down up to 10,000 times with no loss of image resolution. Moti experimented with the process to find a way of filming the soap bubble bursting that would allow an event that is normally invisible because of its speed to unfold before the eyes of the viewer over a period of 18 minutes.

This year, Melvin Moti has shown his work in various one-man presentations and group exhibitions, in Vancouver, Berlin, New York and Moscow. In 2004 the Stedelijk Museum Bureau Amsterdam premièred his film No Show (2004) as part of the central ‘Something Happened’ presentation at the KunstRAI and in 2005 it organised Moti’s first ever museum solo exhibition with the première of The Black Room (2005). Following these presentations, the museum acquired works for the collection.

This October’s Stedelijk Museum Bulletin will include a long interview with Melvin Moti written by Martijn van Nieuwenhuyzen, curator of the forthcoming exhibition. To accompany the exhibition, Moti is issuing a limited-edition publication entitled Glamour, containing contributions from authors John Mulholland, Raimundas Malasauskas and Akira Mizuta Lippit (76 pp., 250 numbered copies, on sale for € 20 in the museum shop).

J.C. van Lanschot Prize
Melvin Moti has been awarded the 2006 J.C. van Lanschot Prize for the Visual Arts for this project. He was selected from three nominees by a jury consisting of Ann Demeester, Roel Arkesteijn and Dominic van den Boogerd. The chairman of the jury was Hendrik Driessen, a committee member of the foundation awarding the prize. The biennial prize was instituted in 1992 by private bank Van Lanschot Bankiers, founded in 1737. It is awarded in memory of Jan Cees van Lanschot, chairman of the bank’s Board up to the time of his death in 1991. Earlier prize-winners are Peter Struycken, Carel Visser, Ger van Elk, Panamarenko and Didier Vermeiren.