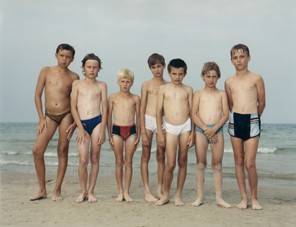 Travelling exhibition, organized by the Stedelijk Museum, of work by the Dutch photographer Rineke Dijkstra (b. Sittard 1959).

“Rineke Dijkstra” brings together seventy photographs chosen from the most important series which the photographer has realised between 1992 and 2003, such as her beach portraits, new mothers immediately after giving birth, bullfighters, girls from the Buzzclub, photographs made in Berlin’s Tiergarten, the series of Almerisa, a Bosnian refugee, and those of Oliver, a French youth in the Foreign Legion, and the portraits of male and female Israeli soldiers. Further, two of her video works, “Buzzclub/Mystery World” and “Annemiek”, will be included in the exhibition. This will be the first time Rineke Dijkstra’s work will be seen in the context of her whole oeuvre.

Dijkstra acquired international fame thanks to her impressive portrait series. In the early 1990s she began with work on the magisterial series of Beach Portraits, austere, frontal shots of young people on beaches in the United States, The Netherlands, Belgium, Poland, Gabon and the Ukraine (the former Soviet Union). In this series Dijkstra concentrated on the moment that a pose just begins to form, or is just being abandoned. Hesitancy and uncertainty are visible in the bearing and glance and refer to the existential loneliness of adolescents. The surroundings, limited only through the framing, the somewhat low camera angle and the use of a fill-in flash sharpen the often strongly culturally defined details and reinforce the monumental character of the images.

In several series done around the mid-1990s Rineke Dijkstra began to focus on the visualisation of intensified emotional states. She photographed new mothers immediately after delivery with their babies pressed against them, revealing and moving images of mother’s love that leave every saccharine association with motherhood far behind them. She recorded bullfighters in Portugal, after an appearance in the arena, tired, proud, fulfilled and sometimes surprised or wounded. In England she did portraits of vulnerable students and very young girls, sexily tarted up for an evening out at the disco.

Through her approach, unsparing but at the same time somewhat distanced and thus respectful, in these series Dijkstra was able to bridge the gap between the personal and the universal. At the same time, she was investigating the boundaries of the portrait. The people she photographs often bear a name, but equally represent a group, a phenomenon which transcends the purely individual. In this sense she is both a disciple of Diane Arbus, with her strongly confrontational, revealing human images, and of August Sander, who catalogued German society in types, chiefly during the interwar period.

Among the important themes in her work are photographically recording the changes in time, and the psychological effects of masks or uniforms. Beginning in 1994, over several years she photographed Almerisa, a girl originally from Bosnia, as she developed from a frightened young bird in neat clothing to a fashionably dressed, self-assured young woman. Just how much a uniform protects, changes and gives status to a person is a theme borne by both the photos of the sexy Buzzclub girls and the images of the Israeli soldiers. Dijkstra opted for another approach for her portraits in Berlin’s Tiergarten. Here her emphasis lays less on pose as on gesture; the atmosphere for this series is more theatrical, an effect that is strengthened by the dark, woody environment.

Among the highlights of her work in the 1990s are the video works “The Buzzclub/Mystery World” and “Annemiek”. Music plays an important role in both. In the former disco patrons, both boys and girls, dance to disco beats, sometimes alone, sometimes in pairs projected next to each other. Their surroundings are a white, studio-like space. The complete concentration on the adolescents filmed full-length, on their clothing, their body language, their sometimes too obvious drunkenness, is literally fascinating. In addition to the images selected from the series mentioned here, the exhibition also contains independent portraits and material from a presently unfinished series.

A book of about fifty images and texts by Urs Stahel, director of the Fotomuseum Winterthur and Hripsimé Visser, curator of photography at the Stedelijk Museum, will appear from Schirmer and Mosel to accompany the exhibition.

The exhibition is supported by the Mondriaan Stichting.