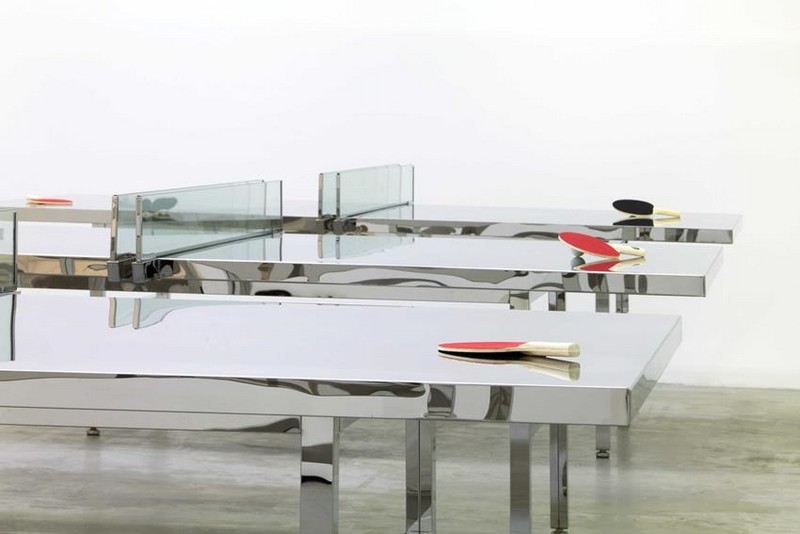 Come and play a relaxing game of ping pong in the centre of Amsterdam, part of Thai artist Rirkrit Tiravanija’s interactive art installation Tomorrow is the Question. Using social interaction as his starting point, Tiravanija creates encounters in which the audience are given an active role.

It’s his mission to make contemporary art accessible and to blur the boundaries between artist and audience. Commissioned by the Holland Festival and the Stedelijk Museum, Tiravanija will stage his Amsterdam version of Tomorrow is the Question on Museumplein.
You can borrow ping pong bats and balls at the Stedelijk Museum.

BACKGROUND INFORMATION
Since 2015, Stedelijk Museum Amsterdam and Holland Festival have intensified their partnership, annually commissioning an artist working at the interface of visual arts and performance to mount a freely accessible work of art at Amsterdam's Museumplein.This new initiative was kicked off last year by New York based British artist Liam Gillick. His installation All-Imitate-Act offered the public the opportunity to immortalise themselves as characters from the works of Oskar Schlemmer or Kazimir Malevich. That same year, the Stedelijk and Holland Festival also invited Tino Seghal to stage his performance piece This Variation. This year, Thai artist

Rirkrit Tiravanija (1961) is coming to Amsterdam to present Tomorrow is the Question. Setting up a cluster of pingpong tables on Museumplein, Tiravanija aims to seduce his audience into taking part – to play a game of pingpong or watch others play. With his work, he stages social and intimate encounters between people. The usually passive public are encouraged to become active participants. Tiravanija has blurred the boundaries between public and private before, serving green curry to gallery visitors, drinking tea with people visiting a reconstruction of his apartment or giving away printed T-shirts. He also famously built an enormous pic-nic table for his audience to sit down and collectively complete a jigsaw puzzle, and in The Land (1999, ongoing) he invites people to a piece of wasteland in Thailand to realise their personal artistic, agricultural or social projects. In Tomorrow is the Question, Tiravanija once again challenges the boundaries between art and life.

In his characteristic, humorous way he presents his radical views on the standard forms of exhibition and their conventions, supplanting them with a more theatrical, social, even cosy experience, preferably situated outside of standard exhibition venues and as accessible as possible. According to Tiravanija 'It is not what you see that is important, but what takes place between people.'He has exhibited his work world-wide, from

Rotterdam's Boijmans Van Beuningen museum to New York, São Paulo and the United Arab Emirates. Tomorrow is the Question (2015) – which has been shown previously in Moscow and Arles – will mark Tiravanija's Holland Festival debut. The work is accessible free of charge. You can borrow bats and balls at the Stedelijk Museum.

BIOGRAPHY
Artist Rirkrit Tiravanija (1961) was born to Thai diplomat parents in the city of Buenos Aires. Having grown up around the world in his youth, he leads a nomadic existence, commuting between New York, Bangkok and Berlin. Tiravanija is considered one of the most influential multimedia artists of his generation. His dynamic installations are impossible to pin down, combining elements of traditional (object) art, culinary traditions, sport, public as well as private performances, audience participation, education and other forms of public service and social interaction. Movement is a central feature in his art, designed to foster new communities, social networks and enduring friendships. His art is essentially social in character. Tiravanija studied at the Ontario College of Art, the Banff Center School of Fine Arts, the School of the Art Institute of Chicago and the Whitney Independent Study Program. Solo exhibitions of his work have been mounted by the Museum of Modern Art (New York, 1997), the Los Angeles County Museum of Art (1999), the Astrup Fearnley Museum of Modern Art (Oslo, 2002), the Chiang Mai University Art Museum (2004), the Museum Boijmans Van Beuningen (2004), the Museé de la Ville de Paris (2005) and the Kunsthalle Bielefield (2010). His work has received several awards, including the Solomon R. Guggenheim Museum's Hugo Boss Prize and the 2010 Absolut Art Award. Tiravanija teaches at Colombia University's School of Visual Art. He is one of the founders of the Utopia Station art collective.