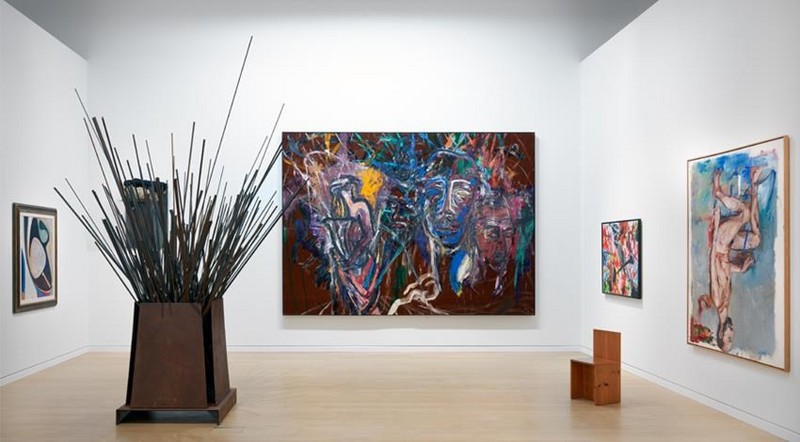 The exhibition presents a survey of contemporary art produced over the last fifty years, including abstract and figurative painting, and works that have become highlights in the collections of the Stedelijk, Van Abbemuseum and the Gemeentemuseum Den Haag.

RUDI FUCHS: A SINGULAR APPROACH
From the outset of his career, Rudi Fuchs took a singular approach to exhibition-making, presenting unexpected combinations of work by different artists and styles. Similarities between contemporaries proved a fertile field of exploration, inspiring him to present Daniel Buren alongside Georg Baselitz and Gilbert & George opposite Bruce Nauman. Fuchs installed galleries not on the basis of art historical information; his choices were based on looking.

In the words of Rudi Fuchs: “Hanging art works in close proximity throws their singularity into sharp relief. Look at the 1970s – there were so many radically different kinds of art that were, or seemed to be, at odds with each other. But if you looked at the works with an open mind, each excelled in its own way. At least, that’s how it struck me. You could be biased, as many people were, or accept the plurality as abundance – and take that view of art. As early as 1980, Markus Lüpertz and Richard Long told me: it’s about the quality of our generation. There’s no such thing as ‘right’. There is taste, and preference – but that’s something else altogether. In today’s world, no one is automatically the first. In art, no one is the best. That’s what this exhibition is about – from my perspective, and with the works that are available.”

At the heart of the exhibition is the excitement of discovering and getting to know works of art. Fuchs shares with visitors his way of seeing, a vision that’s all about taking time, about patience and precision. He considers the art work an intense expression of how an artist sees what he or she is making – every aspect of the work is, after all, a consequence of the decisions taken by the artist during the making process. Fuchs himself looks at the end result with the same intensity, studying the materials, technique, colors and format, the composition and the tradition within which an artist works. Excitement invites viewers to discover the similarities, differences, richness of color, composition, material and ideas at their own pace.

The exhibition design and graphics are created by Walter Nikkels, who installed numerous exhibitions with Rudi Fuchs in the three museums of which he was director, as well as Documenta 7 in 1982. To date, Rudi Fuchs is the only Dutch art professional to have been invited to curate this prestigious art event.

GALLERY TEXTS
The title cards at the Stedelijk usually provide the name of the artist, the title of the work, the year, the collection, and in some cases the technique and whether or not the work was gifted. In this exhibition, Rudi Fuchs chose to show only the name of the artist and the year in which the piece was made, and offer no further information in the galleries. His decision was motivated by a desire to encourage people to look: “You think you need all that information, but all that title cards do is create tunnel vision. Most people first read the description, then look at the work to see if it matches. Which is strange, don’t you think? If people see that a Rob Birza painting is called Moon Men, they think: oh yes, that’s right. And that’s it – you don’t look any further. But what if you see mermaids? Or something that looks like your mother-in-law? It’s important for you to have complete freedom. You should be able to look at a work and discover it for yourself, without having a predetermined idea. And if you look at piece without knowing the title, you see far more. Try, for example, to work out the order in which an artist made the work. Believe me, you really don’t need the titles. And in any case, half of the artworks here are called ‘untitled’, so it isn’t really that much of a loss.”
www.stedelijk.nl