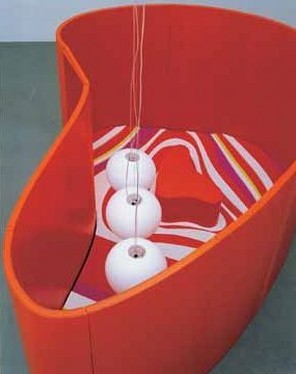 The Stedelijk Museum CS will present the first major Dutch retrospective of work by Tobias Rehberger (b. 1966, Esslingen, Germany).
Opening on Thursday, February 21 from 5-7 p.m.

In the mid-nineties, Rehberger gained an international reputation for objects and installations at the interface of fine art, design and architecture. For this exhibition at the Stedelijk, the artist is devising a special installation involving sculptures and light that produce a mural.

The artist’s aim is to examine fundamental issues about the objects with which we surround ourselves in our everyday lives. How do we look at the things around us? How does an object function? Rehberger’s work examines the role of the artist as an ‘auteur’. One way in which he does this is by getting other people to influence the design and production process. The people he involves may be friends or collectors, or perhaps craftsmen in places like Thailand and Africa. In the latter case, he deliberately allows the cultural ‘translation’ of his designs to have a decisive influence on the final work of art. Modifications and misinterpretations therefore play a conspicuous part in his artistic oeuvre.

Light and lamps have a prominent role in Rehberger’s work. For example, his Nightshift exhibition at the Palais de Tokyo in Paris (2004) was only open after sunset and was lit solely by the light emanating from the works themselves. The forthcoming exhibition at the Stedelijk Museum will rely on the fact that, lit by special theatre spotlights, Rehberger’s works create an extraordinary visual sensation. Some sculptures made of coloured Perspex throw red, blue or green shadow on the wall, while other works create a distinct, darker outline.

The exhibition will include a number of important groups of works produced over the last fifteen years but now exhibited – literally and figuratively – in a new light. Early works will be represented, such as the ‘vase portraits’ for which he became well known around 1995. There will also be important video-sculptures, such as the Video Libraries. To create these works, Rehberger collected together iconic film excerpts featuring stars like Joan Crawford and showed them on a television set. However, the images could be perceived only as a flickering light on the wall. Another memorable work in this group is 84 Years, designed to have the same duration as a human life and involving the projection over a period of 84 years of all 3.6 million colours that a video-projector is capable of projecting over that space of time.

The exhibition will also include objects examining the concept of shared auteurship and the relationship between a model and an original. An example of this is the series of furniture designs – famous design classics – executed by local craftsmen in Cameroon on the basis of simple sketches produced by the artist. More architectural works on show will include Mutter 93%, an almost life-size scale model of a garage, on the basis of which a real garage could be built if the purchaser so wished.

In the exhibition, the works of art will be used as the raw material for an entirely new work, to be created by projecting light onto a gallery wall more than 70 metres long. The sculptures will be arranged in a long row in the middle of the exhibition space and lit by special lamps from one side only. The resulting shadows will combine with painted murals to form the new work.

The exhibition is being curated by Leontine Coelewij, curator at the Stedelijk Museum.