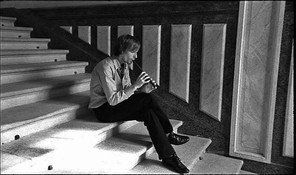 Ulla von Brandenburg (b. Karlsruhe, 1974) produces works in a mixture of media, including films, videos, wall paintings, drawings, performances and installations.
In Docking Station, the project space at Stedelijk Museum CS, she presents her installation La Maison, first seen as part of the Performa Festival in New York in November 2007 and now receiving its European premier in Docking Station.

La Maison is a labyrinthine three-dimensional structure composed of textile-clad panels, the colours of which are inspired by the colour schemes of the Bauhaus and the Lüscher Colour Test. At the heart of the labyrinth is a new 16mm film called ‘8’ (2007) which leads the viewer through a different kind of maze: an endless series of rooms.

The black-and-white film is a journey through the spaces inside a baroque castle. Filming in a single take, the 16mm camera feels like the human eye: its view is continuous and fallible. As it makes its way through the building, the viewer encounters clusters of people in modern dress and frozen attitudes: evocative tableaux vivants seen against the bare walls of the castle. The scenes evoke memories of images from cinema, theatre and art history. The incessant camera movement contrasts with the frozen immobility of the human tableaux, just as the grey texture of the monochrome film stands out against the bright colours of the three-dimensional installation. In short, La Maison is a work that lives by the grace of contrast.

Ulla von Brandenburg has exhibited at the Palais de Tokyo in Paris, Kunsthalle Zürich and recently in the group exhibition The World as a Stage at Tate Modern in London. In spring 2008, she is to have a solo exhibition at the Kunstverein in Dusseldorf.

The presentation in Docking Station is Ulla von Brandenburg’s first ever exhibition in the Netherlands and is being organised by Martijn van Nieuwenhuyzen, curator at the Stedelijk Museum.