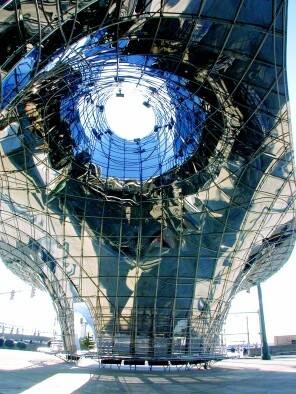 The oeuvre of Vito Acconci is characterised by great artistic diversity. Where poems, photographs and performances played a central role in his early work, recently projects in public space, under the name of Acconci Studio, have taken central stage. The retrospective exhibition ‘Vito Hannibal Acconci Studio – Word / Action / Architecture’ in Stedelijk Museum CS not only devotes attention to the earlier work of this American artist, but also to these more recent architectural projects.

Like artists such as Allan Kaprow, Bruce Nauman and Dan Graham, Vito Acconci (b. 1940, New York) acquired his reputation in the 1960s for his performances and the photography and video art derived from them. Generally a direct confrontation with the viewer, in a very intrusive manner, is central to these performances. He followed passers-by to their destination, or masturbated under the floor of a gallery and let visitors hear the sound of him doing so through speakers. He enjoyed his greatest notoriety for the performances in which he explored the boundaries of his own body and its capacity to endure pain: biting himself, falling on the ground, or pulling out a square decimetre of his own body hair. A famous work from this period is Blindfold Catching (1970), in which, while blindfolded, he tries to catch rubber balls thrown at him with great force. In ‘Vito Hannibal Acconci Studio – Word / Action / Architecture’ an almost complete survey of this performance work is to be seen.

The performances arose out of poetry, which Acconci regularly published in literary magazines in the 1960s. For the first time a broad survey of this work is being given, both in the exhibition and in the accompanying publication. Acconci Studio has designed a poetry table especially for the presentation in Stedelijk Museum CS, for the space in which the texts are brought together with performance photographs. Another component of the exhibition consists of the Audio Stations, places where visitors can listen to Acconci’s spoken text works.
In addition, a number of the installations to which Acconci began to devote himself in the 1970s are to be seen in this exhibition. It becomes clear from the exhibition that it was a relatively small step from his poetry, via his performances and installations, to his works for public space and his present architectural practice. Through his continuous exploration of the boundaries between the private and the public he addressed all these different working fields. His fascination for space, in its various meanings, is the most recurrent aspect of this search.

The current, renewed interest in performance art makes Acconci’s old work surprisingly topical again. The presentation of rarely if ever seen video and photo work offers a fruitful historical context for this tendency in contemporary art. With his projects for public space Acconci is every bit as much a pioneer, were it only for their landscape-architectural dimensions. This work also often confronts the visitor with his or her own existence, as can be seen in his projects Personal Island, for the ‘Floriade’ in Zoetermeer in 1992, Park in the water, which was realised in The Hague in 1997, and the recently delivered, futuristic-looking pavilion Island in the Mur in Graz, Austria. His models and designs for such projects are shown here. Acconci Studio also developed Film Rooms especially for the exhibition, in which continuous impressions are shown of various concepts and plans for realised and unrealised designs.

As early as 1978 the Stedelijk Museum mounted the first large survey exhibition of Acconci’s work to be seen in The Netherlands, which was curated by Dorine Mignot who also coordinates the current exhibition. Since then the Museum has closely followed the developments in his oeuvre, and purchased video and other works for the collection. When the Museu d’Art Contemporani de Barcelona (MACBA), in collaboration with Corinne Diserens – curator of the much-lauded retrospective of Dan Graham in the Kröller-Müller Museum in 2002 – recently organised a new retrospective, the Stedelijk immediately linked up with her to organise a sequel to her previous involvement with Acconci.

SMCS on 11
On Thursday, September 29, Vito Acconci will engage in a discussion with Dr. Jeroen Boomgard (Lecturer at University of Amsterdam/Rietveld Academy). Begins 8:00 p.m.

Publications
In the catalogue Vito Hannibal Acconci Studio, published by the MACBA, includes an interview with Acconci by Yvonne Rainer, an introductory text by Corinne Diserens, several essays, and a DVD. There is also an extensive selection of Acconci’s poetry and an overview of his works and projects. English. ISBN 8-49595-171-1 / 350 pages. Price: € 39,00.

Stedelijk Museum Bulletin 4/5, 2005, includes an introduction to Acconci’s whole oeuvre by an authority, Lily van Ginneken. This double issue is available in the Museum Shop (Ned/Eng), and costs € 7,--.