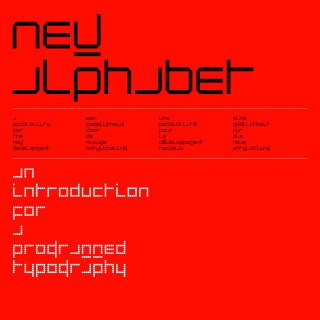 Tribute to Wim Crouwel (1928-2019) with a selection of his typographic oeuvre.

The Stedelijk pays tribute to the iconic Dutch designer Wim Crouwel, an exhibition that features a selection of his typographic oeuvre. Wim Crouwel (1928-2019), co-founder of the first multidisciplinary design agency in the Netherlands, Total Design in 1963, is one of the Dutch best-known designers. He is internationally renowned for creating projects for numerous organisations and institutes including the Van Abbemuseum, the Stedelijk Museum, designing fonts such as the 1967 New Alphabet, company logos etc. Crouwel was also a notable spokesperson for the profession, and was always forthright in sharing his own views. He was the sole designer of the Stedelijk Museum’s visual communications from 1963 to 1985.

IN MEMORIAM
On the 19th of September, 2019, Wim Crouwel passed away at the age of 90. The Stedelijk Museum mourns the loss of an exceptionally gifted and extremely loyal friend and passionate ambassador for design.

MR. GRIDNIK
Throughout his career, Wim Crouwel was a fervent advocate of the grid system, a tool he considers one of the most important in the designer’s toolbox. His practice was profoundly influenced by the Swiss school of graphic design, whose rational, minimalist approach was organised around a grid system. Crouwel employed the grid structure in his designs for the Van Abbemuseum in Eindhoven (1956-1964) and later for the Stedelijk Museum. At Total Design, grid sheets provided templates for the abundance of typographic work produced for the Stedelijk. Crouwel has always favored an analytical approach, believed in technology and progress, and promoted design as an independent profession. His preoccupation with grid systems was the subject of the exhibition Wim Crouwel: Fascinated by the Grid, which was on show in Japan in 2017 and 2018. Crouwel’s design projects for the museum comprise a monumental oeuvre that has cemented his reputation.

The Stedelijk Museum has always been influential with her graphic design, and has a rich and long-standing tradition in this field. This history is explored in the introduction to the Crouwel show, which presents other celebrated designers who have shaped the Stedelijk’s visual identity such as Willem Sandberg, Anthon Beeke, Experimental Jetset, Mevis & van Deursen and others.

Wim Crouwel (1928) started his career in 1952 as an exhibition designer but became best known as a graphic designer. In addition to being a designer, he was also a lecturer, professor, organizer and spokesperson. From 1985 to 1993 he was director of Museum Boijmans van Beuningen in Rotterdam. He was and is a leading figure in Dutch design and in Dutch cultural life. His work still shapes the practice of many young designers throughout the world. The Wim Crouwel Institute was founded to promote the world of graphic design and share its heritage.