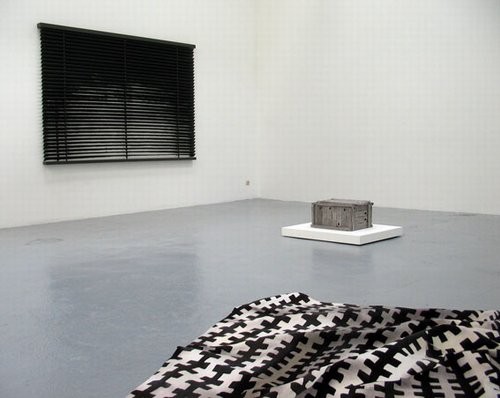 Rupert Norfolk was born in Wales in 1974, and lives and works in London. This is Norfolk’s first exhibition in the gallery and, except for ‘Untitled (Black and white Tapestry)’ all his works are new from 2008 and created for this exhibition.
In his sculptural oeuvre he examines the mimetic potential of various objects and processes. With his sculptures Norfolk creates conceptual ambiguity about what is object and what image, about presentation and representation.
At first glance, the work ‘Fig leaves’ shows a pile of fig leaves. If we have a closer look at the different so-called leaves, we notice that they have been made in a conspicuously incorrect way. Besides the organic form and the crenated edges, one can also recognise remarkably geometric structures and straight lines. This actually summarises Norfolk’s research accurately: looking for a ‘realistic’ representation of something by aiming for the boundaries of figuration and abstraction and showing exactly this tilting moment in the sculptures.
Equally so in ‘Untitled (Black and white Tapestry)’: a woven tapestry is lying ‘untidely’ on the ground and various folds contradict each other... ‘Blinds I’ and ‘Blinds II’ are not attempts to depict a Venetian blind. The starting point of this sculpture is the reproduction of the incidence of light at the exact moment when you open the slats. Though it is actually a vague transition between light and dark (‘blur’), it is created by reproducing the metal contours very sharply with a taut line. Because of this, the sculpture retains a strongly graphic image, almost as a cartoon.
‘Box’ is made from one little old wooden beam. Norfolk cast it several times and then assembled it. It is only on the inside that you notice it was cast. It is searching, as it were, for the prototypical representation of what an old wooden box would look like, exactly by representing it in a different material than wood.
Rupert Norfolk recently exhibited in the group show ‘Featuring’ at Chez Valentin in Paris, and also in ‘The Walls in Three Places‘ at the Charlton Art Centre in Dover. In 2006 he was part of the group show ‘Counterfacture’ at Luhring Augustine Gallery in New York. He is represented by Dicksmith Gallery in London.
www.stellalohausgallery.com