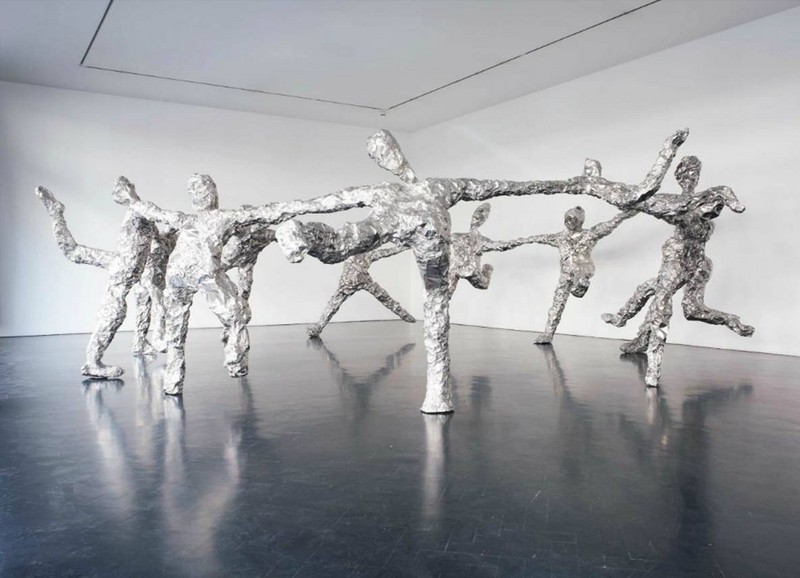 All that glisters is not gold;
Often have you heard that told:
Many a man his life hath sold
But my outside to behold:
Gilded tombs do worms enfold.

Stephen Friedman Gallery is delighted to announce its summer exhibition All that Glisters. The occasion also marks the inauguration of the gallery's second space at 11 Old Burlington Street. Presented here is a selection of significant works by several gallery artists whose practice explores the dynamic relationships between surface and form; audience and object. Highly polished steel; heavily impastoed paint; pure Japanese silver; bejewelled facades and the moving image conjoin here under the idiom ‘all that glisters'.

Inhabiting the entire front gallery and shown here for the first time is Tom Friedman's major new outdoor sculpture Circle Dance, 2010. Inspired by Henri Matisse's painting La Danse the work consists of a circle of eleven life-sized dancing figures, cast in a highly polished stainless steel. The origins for this work lie in a smaller macquette of the same design, handmade by Friedman out of oven roasting trays. Exploding the work here to human scale, the artist accentuates the creases and lines embedded in the thin, malleable foil of the original model. The disposable and everyday is exaggerated yet simultaneously transformed by Friedman's alchemic touch. Conceived to be situated within the landscape, the figures are at once light-footed and unerringly enduring; frozen in time yet brought to life on their reflective surfaces.

Transformative powers are equally at work in Jim Hodges's new wall-based work, aptly titled New Directions. Specially conceived for this exhibition, this work in two-parts marks an exciting new architectural interest for the artist. Two linen canvases gilded in Japanese silver have been embedded within the walls of the gallery. Unfurling and bursting forth, the delicate, shimmering surface catches the light to reveal an intricate web of carefully constructed folds.

The humble material reconfigured and re-presented as monumental is apparent in Tara Donovan's new pin drawing. Here, thousands of steel push-pins have been carefully affixed to a large piece of board. As each pin reflects and refracts the light, a monochromatic field emerges, giving the appearance of a moving surface. Reinventing objects taken from our everyday visual landscape, Donovan reveals a notion of the sublime where one least expects it.

The paintings of Donald Moffett and Wayne Gonzales offer an equally reflective experience. Bright white orbs float on the canvas of Wayne Gonzales's most recent painting; a large-scale diptych that expands upon his earlier explorations into abstraction. These grid compositions are tightly structured, but the effect on the viewer's eye is a highly fluid and evocative visual experience, recalling the op-art movement.

Surface texture is equally apparent in Moffett's densely built up monochromatic oil paintings. In Untitled (Lot 010804), layer upon layer of aluminum paint is built up on the surface of a small canvas, forming dense and irregular linear striations. The canvas hangs from a raw piece of wood, which is firmly planted in a bucket full of hardened concrete. Standing upright in the centre of the gallery space, the work recalls an improvised sign, beckoning the viewer to look more closely for its message. There is no language to be found here however. As such, the canvas, though heavily built up, becomes paradoxically blank once more: a host for external projections both visual and emotional.

Past and present collide in Tonico Lemos Auad's large-scale wallpaper installation, Reflected Archaeology. Here the viewer is invited to approach the wall and ‘scratch off' its silver surface to reveal a complex and beautiful collage of images and drawings beneath. Depicting offerings commonly made to the Candomblé, goddess of the sea on the beaches of Brazil, this work tells a multiplicity of stories. Ingrained mythologies and customs passed along for centuries meet a contemporary audience whose own interaction with them are simultaneously mirrored back in the silvered surface.

Lucas Samaras is represented by a group of bejewelled assemblages. Begun in the mid-sixties and continued through the eighties, these rare, fetishist objects are at once familiar and foreign. Corrupting the recognisable, the artist punctures inert forms with pins, or encrusts vessels with colourful shards of glass and jewels. Initially somewhat alien, these works are reminiscent of an earlier age, or a forgotten civilisation. Suggestive of inhabited worlds these small sculptural forms recall the Greek Byzantine heritage of the artist's forefathers, offering up a history reflected onto the present day.

In the wide-ranging works shown throughout this exhibition, there is an emphasis on the transformative power of materials. Here, surfaces remain unstable, with the audience both spectacle to and part of the encounter with the artwork. The works not only reflect this social interaction, but also offer forth multiple images of their own tangibility, rebounding back and forth from within. All that glisters may indeed not reveal itself to be gold, but in fact something far more captivating.