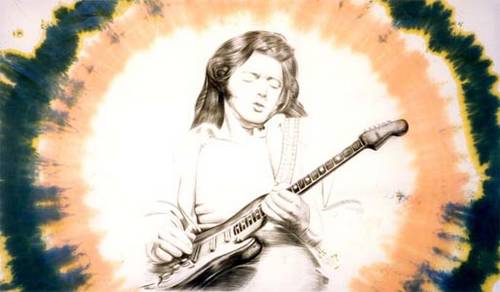 Stephen Friedman Gallery is pleased to present new work by German artist Cornelius Quabeck.
In his paintings and drawings, Quabeck incorporates paint, tie-dye and charcoal in arresting and thought provoking compositions. His subject matter ranges from wide-eyed monkeys to portraits of ecstatic rock stars. In his practice, he marries traditional painting and drawing techniques with modern iconography.
Quabeck is a meticulous draftsman. He often draws onto large canvases where the supporting stretchers are subtly visible through the muslin surface. By tie-dying areas of the canvas, the viewer is reminded of the sensibility prevalent during the Vietnam war era when tie-dye was used as a form of artistic expression (as well as protest) for the hippie, psychedelic generation who were free-spirited and uninhibited.
Quabeck’s work is infused with a spirit of inquisitiveness. His exhibition at Stephen Friedman Gallery is titled Disegno in acknowledgment of his debt to texts written by the Renaissance writer Giorgio Vasari. Here, Disegno refers to both the concept of design and the image that results from the act of drawing. It is this critical aspect of making art, the linchpin that unites theory with practice and conjoins the intellect and the act of making, which appeals to Quabeck.
The paintings in Disegno pay homage to legendary rock guitarists. In each canvas a musician is depicted in charcoal in the centre of the work. Each man appears glorified, surrounded by a vibrant tie-dye halo. The paintings allude to classic rock album covers and bring to mind youthful infatuations with musical heroes. However, the use of tie-dye gives a deceptively simple air to what are actually complex figurative compositions. Each guitarist has been delicately rendered onto a canvas which is reminiscent of the colour and texture of human skin. Each portrait is therefore venerated in a manner similar to that of the depiction of saints and martyrs in art works produced during the Renaissance period.
Cornelius Quabeck has exhibited widely in Europe. Recent solo exhibitions include Schilderen for the Revolution, Galerie Martin van Zomeren, Amsterdam in 2005; Surrender to my D ́Generation, Galerie Christian Nagel, Berlin; Fratzentango - The Spirit of Linné, Exhibits with Horst Schuler, Düsseldorf in 2004 and me sentiments distingués, Projektraum, Galerie Hammelehle und Ahrens, Cologne in 2003. Group exhibitions include Sonnenblume Titanic, kjubh Kunstverein, Cologne; McDevitt/Clarke Presents, Hugh Lane Gallery, Dublin in 2005; The Festival of Dreams. Songs of Innocence and Experience, Lombard-Freid Fine Arts, New York; Hamburg Blues, Interconti, Hamburg; Zunge an Zündschnur, Krinzinger Projekte, Vienna; Janis Avotins, Cornelius Quabeck, Jan Stieding, Galerie Rüdiger Sch"ttle, München and Besides, popularity is a rather lumpy concept, no? Kunsthalle Düsseldorf in 2004.