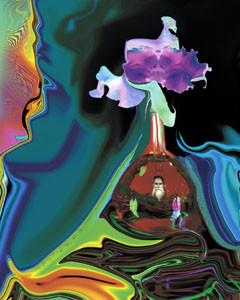 Lucas Samaras’s original and versatile approach to art making has had a profound impact on developments in contemporary art, creating works which have anticipated dominant trends in painting, sculpture and photography. In this exhibition, rare and early works by the artist are presented alongside ‘Doorway’ – a mirrored room environment conceived in 1966 and produced here for the first time.

Appearing from Rutgers University in the late fifties, Samaras found himself at the centre of the New York art world; his peers included Allan Kaprow, George Segal and Robert Whitman. The performative mood of the Happenings scene influenced and shaped a life-long preoccupation with the self, always incorporating his immediate environment into his work. Expressed in his sculptural work or in his radical use of Polaroid film, Samaras always found himself as the subject of his own universe. The investigation of the body or the portrait of the artist provides the central concern that unites the broad and varied character of his art.

Starting in the mid-sixties and continuing through the eighties, Samaras created a series of bejewelled assemblage boxes encrusted in objects such as push pins, glass millefiore beads, yarn or razor blades. These boxes suggest inhabited worlds, recalling the Greek Byzantine heritage of his forefathers, while the off cuts and discarded materials refer to childhood recollections of the young Samaras spending time with his dressmaker aunt. Included in the exhibition is ‘Box #101’ (1977-89) - a compelling psychological portrait where the anatomical rendering of the artist's body is shown on the front of the box before it opens out like an altarpiece to disclose a hidden self-portrait within the shrouded and punctured case.

The chicken wire boxes of the 1970s continue the developments Samaras initiated in his box works a decade earlier. Here, stripped back from their embellished surfaces, the artist examines the physical form and construction of the container. Painting the surfaces in different colours, he highlights the shape of its essence by identifying its component planes. The chicken wire boxes suggest a pure and obsessive rendering of geometry.

Responding to developments in Minimalist and Post-Minimalist art, Samaras also concentrated on the geometric possibilities integral to two-dimensional works. The transformative potential of art making attracted Samaras to return to the traditional medium of painting, exploring the surface plane in psychedelic and illusory space. ‘Untitled #12’ (1973) is one example from a series of round disc paintings. Using a system of rules Samaras built up segments of colour, which seemingly spin out of control expanding the geometric possibilities of the circular space.

The synthesis of the paintings and chicken wire boxes are most clearly achieved in the fabric reconstructions, which first appeared in the late seventies. Horizontal bands of wildly different fabrics and patterns are here stitched together, creating a science fiction of space and composition. Anticipating the digital age, Samaras, in his acute observations of detail and form, zones in on the pixilated components and structure of his works.

'Doorway' (1966-2007), is perhaps the purest example of Samaras' mirrored rooms. Here, the viewer participates as both performer and subject as he enters an open-sided room made from mirrored panels. A large mirrored cube sits in the middle of the space and creates a further distortion of the environment. The visceral assault of the viewing space inside 'Doorway' recalls the fractured prismatic space of Samaras's 'Fabric Reconstructions' and 'Dot Paintings'. Whether sampling materials close to hand in his assemblage box structures or making use of new technologies, Samaras possesses an alchemic approach to his transformations in photography, painting and sculpture.
www.stephenfriedman.com