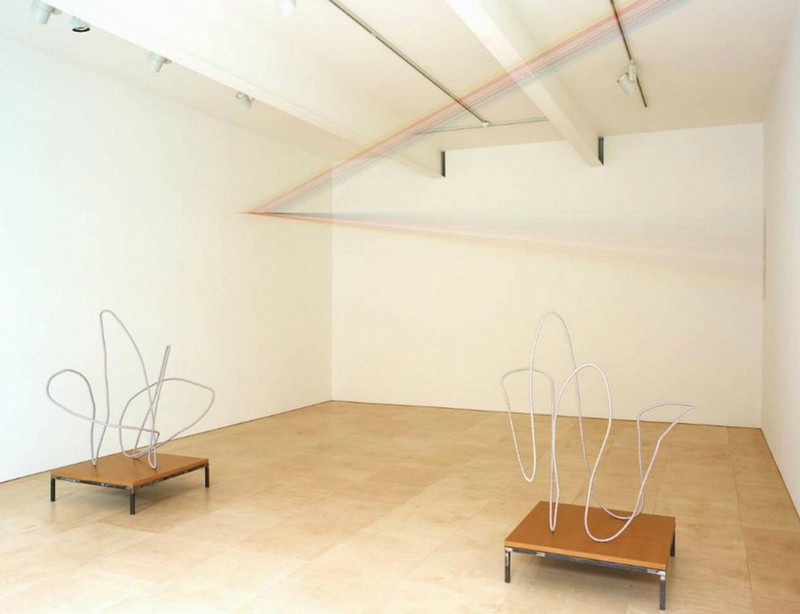 Stephen Friedman Gallery is delighted to announce a two-person exhibition of work by Mark Garry and Isabel Nolan.

This is the first exhibition in a new programme dedicated to the work of emerging artists that will be presented in the gallery's recently renovated space, located at no.11 Old Burlington Street.

The exhibition brings together the work of two of the most exciting young artists working in Ireland. Here, two and three-dimensional works which employ abstracted formal devices in unique and unexpected ways will be shown alongside each other. From silk-clad steel sculptures to kaleidoscopic cotton vortexes, the works shown here demonstrate the artists' subtle command over their materials and articulate a wider concern with the inherently subjective nature of constructed meaning.

Mark Garry has transformed the front gallery space with a site-specific installation comprised entirely of long strands of coloured cotton thread. Stretched tight from wall to ceiling; ceiling to floor, the strands form a continual channel of colours, akin to a beam of light refracting and reflecting or a winding musical score. As the work traverses the gallery space the interior architecture is dissected and contorted, both visually and acoustically. In this way, the relationship between the space and the artwork becomes entwined, with each needing the other for meaning to be realised.

In Gallery 2 Garry shows an interactive sonic sculpture alongside other smaller sculptural objects. This sonic sculpture comprises of two componiums, two reels of punched paper and two resonating chambers; one being the volume of a human heart and the other the volume of a human brain. The viewer is invited to wind each of the two componiums. As the quiet, tinkling notes of sound disperse across the gallery, the encounter with the dazzling installation in the front space is further activated.

Isabel Nolan is known for her exuberant sculptures, which are in equal parts enticing and puzzling; playful and serene. Here, Nolan reunites a pair of sculptures never shown together: Future Thing and Kiss the Machine. Each of these sculptures resembles a three dimensional line drawing; an undulating abstraction hovering in the air yet fashioned from steel and wrapped in a thin, lightly patterned silk fabric. The shimmering silk ‘skin' is a muted grey, mirroring the surface it conceals - from afar its presence perhaps goes unnoticed. As such these works refuse instant recognition. Their titles gesture towards meaning but deny full clarification. Indeed Future Thing implies that meaning might only be found in some unspecified future moment, its purpose not yet realised.

Nolan also presents a selection of paintings: smaller scale works, which permit the artist a wider freedom in expressing her unique interpretations of her surroundings. Vivid, dynamic brush strokes, dripping paint and a palette of vibrant colour lend these canvases an air of spontaneity, recalling the work of Wassily Kandinsky.

Nolan and Garry each exhibit a meticulous approach to their making processes. The works presented here are expertly fashioned and command an inquisitive and considered response. As such, this exhibition marks a dynamic beginning to the new programme at no.11 Old Burlington Street.