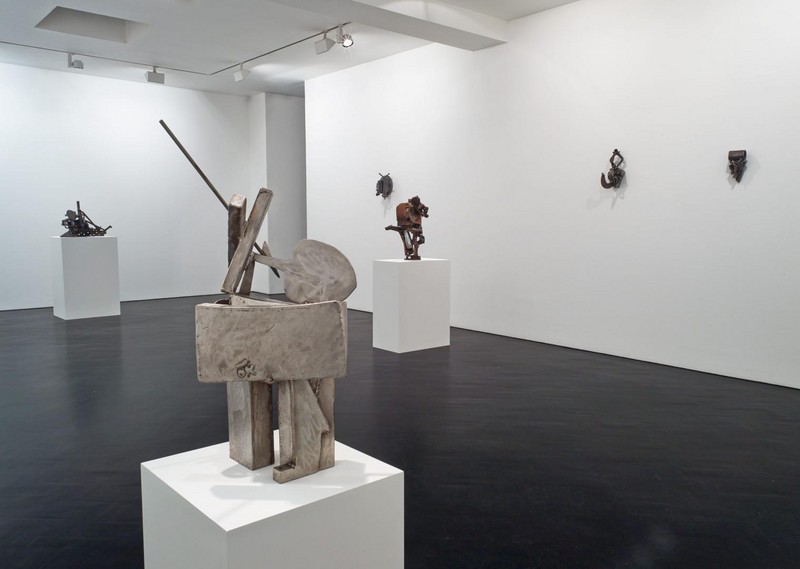 Stephen Friedman Gallery is delighted to present the first UK solo exhibition of Melvin Edwards, one of America's foremost contemporary sculptors. Celebrating a pioneer in the history of contemporary African-American art and spanning five decades, the exhibition brings together a compelling body of work including large and small-scale sculptures, drawings and a site-specific installation.
Edwards' career began in 1965 with a solo exhibition at the Santa Barbara Museum of Art. Over the next five years three more museum exhibitions followed, including his groundbreaking presentation at the Whitney Museum of American Art, the first ever by an African-American sculptor. Since 1970, Edwards' work has been widely exhibited, establishing him as an iconic figure who inspired a younger generation of African-American artists.

In all its forms, Edwards' work engages with the history of race and civil rights and social and political turmoil. Taking inspiration from Africa where he spends several months each year working in Senegal, Edwards' sculptures address his personal history with beguiling openness and universalism and celebrate inclusion and diversity.

The exhibition features a dramatic large-scale sculptural installation made from barbed wire and conceived in the 1960s. Realised here for the first time, its many strands cascade from the ceiling and create a single plane anchored to the wall in a circular configuration. Sharing an affinity with other conceptual minimalist installations of the 1960s, Edwards' choice of barbed wire as material imbues this sculpture with social and political meaning.

Edwards' best known sculptural series, ‘Lynch Fragments', makes up a significant part of this exhibition. They cover three distinct periods in his personal history; the 1960s, where they evolved out of Edwards' response to racial violence in America; the 1970s, out of his protest against the Vietnam War; and from 1978 to the present, where they became a vehicle to honour individuals, to explore nostalgia, and to investigate his interest in African culture.

The ‘Lynch Fragments' exemplify the extraordinary range of Edwards' sculptural practice, welding industrial found objects like hammers, chains and railroad spikes into new forms. From afar, the fragments suggest a gestural abstraction often associated with artists such as John Chamberlain or David Smith. However, these seemingly random juxtapositions reveal themselves to be well thought out assemblages of objects that struggle against one another and evoke thoughts of violence, humour and hope. The 'Lynch Fragments' are installed at eye level to increase the sense of confrontation between the viewer and the object.

The exhibition also includes a number of kinetic ‘Rockers'. Inspired by the memory of his grandmother Coco's rocking chair, they vary in shape, scale and configuration. ‘Level', a small graceful work, articulates the tension and struggle epitomised in Edwards' art; an open, linear pair of C-shapes is linked by twisting tangles of barbed wire. Like all Edwards' sculptures, the ‘Rockers' are welded together in compositions of intense visual and structural energy. The exhibition concludes with a room dedicated to Edwards' drawings.

Edwards' work contains a multitude of contradictions. Seemingly arbitrary forms are meticulous compositions; distinctly evocative, sensitive and forceful. By summoning a range of artistic, cultural and historical references, his art resonates even more today. In January 2015 the Nasher Sculpture Center in Dallas will host his next major retrospective.
www.stephenfriedman.com