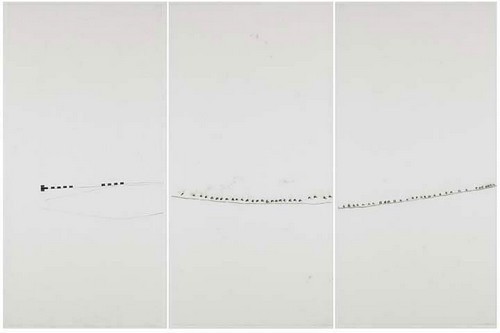 Stephen Friedman Gallery is proud to present an exhibition of monotypes and other works from the Estate of the Brazilian artist Mira Schendel (b. 1919, Zurich d. 1988, São Paulo). This two-part exhibition encompasses an in-depth survey of the artist's works and includes seminal drawings from the 1960s and paintings, objects and collages from the 1950s to the 1980s. This group of oil transfer drawings on thin Japanese paper, known collectively as ‘monotypes,’ have never been shown before.

This exhibition at Stephen Friedman Gallery coincides with a major retrospective at the Museum of Modern Art, New York (5 April - 15 July 2009), entitled 'Tangled Alphabets,' which focuses on the work of Mira Schendel and León Ferrari and cements their position as two of the leading exponents of Latin American Modernism.

Born in Europe in 1919, Mira Schendel is an artist whose life and art were shaped by the tumultuous events that broke apart communities on the Continent leading up to the War. Her Jewish parentage and Catholic education contributed to her profoundly spiritual and philosophical approach to her art making. Displaced by fascist persecution in Italy, Schendel eventually immigrated to Brazil leaving behind her family. Participating in the first São Paulo Biennial in 1951, Schendel soon found herself among the intellectual elite and began to show her work frequently. Her early paintings, in dense tones and textured surfaces, stood apart from the prevailing Concretist movement and suggested dissatisfaction with pictorial means. In life, Schendel was an avid reader and continued correspondence with poets, philosophers and theologians throughout Brazil and Europe. It was in the 1960s that her work began to incorporate language, albeit silently, and it eventually became a crucial part of her formal vocabulary.

The 'monotypes,' produced in 1960s and shown here, were extremely experimental at the time. They were made by applying talcum powder to one side of a piece of Japanese tissue paper and laying this paper onto a pre-oiled glass sheet. Schendel then ‘drew’ with various instruments including her fingers by applying pressure to the unoiled side. The process created an emotive line that almost felt like part of the paper and allowed Schendel to respond gesturally and calligraphically to the material. These graphic marks, letters and blotches resulted in extraordinarily beautiful and poetic two-sided drawings which Schendel insisted be shown suspended and encased between two sheets of glass.

Also included in this exhibition is a single rare example of the 'Objetos Gráficos’ of the late 1960s. Similar in technique to the monotypes, though much larger in scale, this beautiful object is painted in deep red and is peppered with symbols and markings on top and inside the acrylic sheets. Installed in front of a window with natural daylight, the layering of texture and gesture within slowly unfolds. Critic Rodrigo Naves states: "superimposition, transparency, and space were all parts of these works, and the galaxies and constellations of their arrangements reinstated the tension... in a wider, perhaps even cosmic setting, transposing to a superhuman scale the interplay of chaos and meaning."

Other important objects such as ‘notebooks’ and ‘discs’ from the 1960s and early 1970s are also shown here. In this period Schendel began to dispense with her own touch and turned to commercial materials, such as ‘Letraset’ and acrylic. Synthesising the formal experimentation with the ‘monotypes,’ this body of work continued to embrace spiritual ideas of ‘the other side’ of transparency, a place where other worlds and other forms of materiality existed. The notebooks consist of pages of different coloured sheets of paper, patterned with holes and Letraset printing and bound together at one corner so that the layers spin out and expand in one dimension. Similarly, the round ‘discs’ are also made from acrylic sheets sandwiched together. They encase flurries of Letraset letters and symbols, which are legible but untranslatable compositions. Here too, language is seen as a sort of cosmic dust, inchoate and infinite.

Representing Schendel’s late career is an important work from the 'Sarrafos' series. These paintings expressed the conclusion of her experiment in line and form. Unlike the exhaustive workings of the ‘monotypes,’ the ‘Sarrafos’ articulate a Zen-like distillation of her ideas and pursuit of the void. Here, the mute white monochromatic paintings with their protruding forms rupture the pictoral space and deny the plane and surface of the painting. Schendel's experiment in language ultimately concludes in the impossibility of utterance but in the purity of gesture alone.