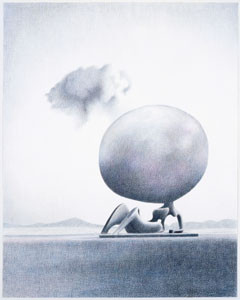 Paul McDevitt's intricate drawings, made from biro, coloured pencil and acrylic spray, explore the realms of fantasy. His compositions resemble anything from comic book illustrations to antique etchings and computer-generated graphic design. His subject matter draws on a multitude of oddly connected ideas. For this exhibition, McDevitt presents his first three-dimensional works which are accompanied by new drawings and a new animation.

In Solitary Figure in Landscape, McDevitt introduces three new bodies of work. In the front gallery, two large sculptures dominate the space and appear at first glance to be monumental figurative abstractions. Made from semi-opaque woven wicker however, these works introduce a lightness in form unfamiliar to the tradition of bronze figurative sculpture. Instead, the wicker sculptures weave a line through the form building up a density and mass which is closer to drawing. McDevitt expresses, in this specific choice of material, linear drawings in three-dimensional space.

Growing up in Leeds, Yorkshire, the artist surely felt the presence of his famous antecedent, Henry Moore. McDevitt’s sculptures allude to Moore's famous reclining nudes in their languid, curvaceous forms. However, these figures are distorted by stretching and contorting their proportions. Engorged heads and lopsided bodies suggest a ridiculous character or personality which is absent from Moore's own restrained modernist figuration.

In the back gallery, McDevitt presents an animation featuring a cartoon character who, burdened by a giant pumpkin head, repeatedly fails to rise to his feet. "You must go on, I can't go on, I'll go on" - the closing words of Beckett's 'The Unnamable' resonate with the absurd plight of McDevitt's tragicomic anti-hero. The sense of isolation, failure and involuntary comedy encountered here is mirrored in the sculptural works of the front gallery.

Accompanying the animation is a third body of work which suggests an ornithological interest following the artist's recent residency in Berwick. Recalling the work of St Cuthbert, a Catholic monk living on the remote Farne Isles, off the coast of Northumbria in Roman times, the artist examines the presence of a ‘Solitary Figure in Landscape’. St Cuthbert gave up the monastic order to take a hermetic vow and his early passion for conservation established the world's first bird protection laws. McDevitt’s works here show hybrid bird nests and habitats made from unusual found materials as though nature had bizarrely transformed and reclaimed man-made matter for herself.

St Cuthbert's isolation on the rural Farne Isles and devotion to hermetic life draws a contemporary parallel to the artist's own struggles within the seclusion of his studio. Solitary Figure in Landscape recalls both the historic legacy of modernism and the existential struggle to ‘go on’ with which we are all familiar.

Paul McDevitt was born in Scotland and lives and works in Berlin. Currently, his work is featured in the Hayward Touring Exhibition Cult Fiction, touring to several other venues in the UK through 2007 and 2008. In October this year, his drawings will be included in the group exhibition Star Dust at the Musée d’Art Contemporain du Val-de-Marne (MAC/VAL). Later this year, Paul McDevitt will be presenting a solo exhibition at the Berwick Gymnasium, Berwick-Upon-Tweed, Northumberland, as part of an Arts Council International Artists Fellowship (17 November – 23 December 2007). Recent group exhibitions include The Starry Messenger: Visions of the Universe, Compton Verney, Warwickshire, (2006); Communism, Project, Dublin, curated by Grant Watson (2005); Sonnenblume Titanic, Kjubh Kunstverein, Cologne, Germany (2005); and Pledge, Sparwasser HQ, Berlin, Germany, curated by Dave Beech (2004).
www.stephenfriedman.com