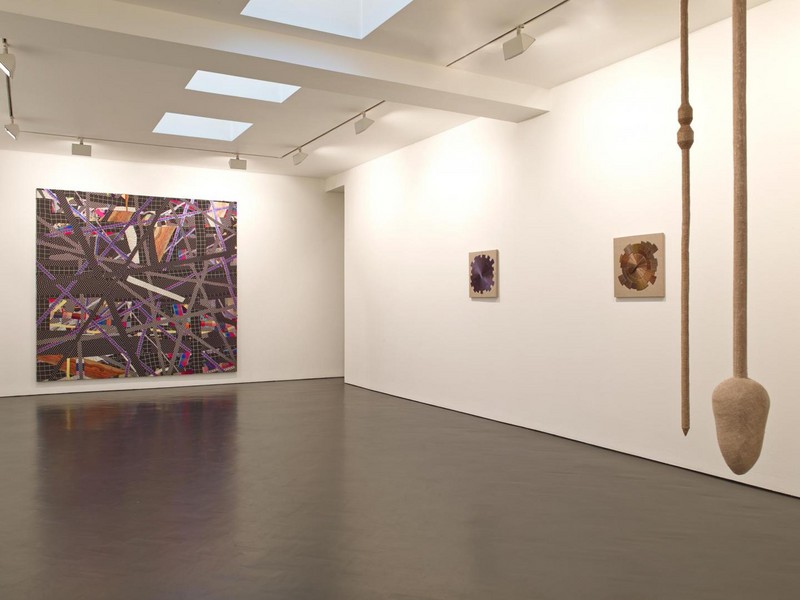 Stephen Friedman Gallery is delighted to announce its winter exhibition, Threaded Stories, which will take place in both gallery spaces. The exhibition brings together the work of seven international artists who incorporate threaded material in their multidisciplinary practices: Tonico Lemos Auad, Mark Barrow, Geta Brătescu, Sheila Hicks, Ruth Laskey and Fred Sandback.
Presenting both historical and contemporary artists, ‘Threaded Stories' offers insight into different generations of artists working across the traditions of Minimalism and domestic craft.

Though Brazilian artist Tonico Lemos Auad (b. 1968), Romanian artist Geta Brătescu (b. 1926) and American artists Lucas Sheila Hicks (b. 1934) and Lucas Samaras (b. 1936) use different methods in creating their work, they are united in their attention to texture and process through the manipulation of fibre and thread.

A selection of works from Geta Brătescu's ‘Vestigii' (Vestiges) series of 1978 feature patches of scrap fabric layered to form a textured collage. Installed on the wall, their tattered edges and patchwork quality appear to hover on the edges of abstraction and figuration. Scraps of bright fabric patterns and hues are mixed and muddled, as their layers often expose the wall behind. A leading figure of Romanian Conceptualism, Brătescu has been the subject of a recent major solo exhibition at MUSAC (Museo de Arte Contemporáneo de Castilla y León) and was recently included in the 2013 Venice Biennale and the 12th Istanbul Biennale in 2011. Brătescu's work blurs the lines between art and the everyday, enhanced by her focus on the process and production of art and the linking of her upbringing in Communist Romania.

Based in London but Brazilian born, Tonico Lemos Auad's inspiration is similarly found in the rituals and traditions of his native country. Presented in the exhibition is a selection of the artist's linen collages and hanging fabric screens, inspired by the movement of sailboats across the river in his home town of Belém, North-East Brazil. A further work hangs from the ceiling and includes multiple elements of rope, delicate lace and hand-crafted linen. Auad revels in the organic fibre that transforms under the artist's hand while poetically retaining a sense of its natural structure.

Sheila Hicks has been creating work for over half a century which speaks of her global influences and sits at the intersection of arts and crafts, design and architecture. Classically trained, Hicks describes her work as ‘unbiased weaves'; working in both two and three dimensions, she exposes and celebrates the inherent nature of the material. Included in the exhibition, ‘Drunken Sailor' features a linen canvas marked in diagonal white lines, across which intertwined strands of cotton are bound together. Deep blues, purples and greens build out of the grid and into our space. The title further evokes a sense of movement as the work conjures up a dynamism that emits a vibrant rhythm.

Exhibited alongside Auad, Brătescu and Hicks, Lucas Samaras employs techniques such as splicing, stitching, interweaving, doubling and repetition, combined with numerous fabrics which create a single continuous surface of kaleidoscopic patterns and colour. Displayed in the back gallery, ‘Reconstruction #13' forms part of an important series of 'fabric reconstructions' by Samaras which first appeared together in the late seventies and responded to developments in Minimalist and Post-Minimalist art. Using textiles Samaras mimics the gestural spontaneity of Action Painting and considers the geometric possibilities integral to two-dimensional works. The controlled energy of this grid like patchwork composition and the saturated spectrum of colours compliments the more subtle tone and palette of the other works in the space.

Mark Barrow (b. 1982) and Ruth Laskey's (b. 1975) geometric and mathematical compositions complement the clean lines in the works by Fred Sandback (1943 - 2003) and offer a contrasting view to the more textured and lyrical works of Auad, Bratescu and Hicks.

Sandback incises the inhabited space with lines of yarn that create substructures and transform its context. The exhibition will feature two works: ‘Untitled' features a single ‘yellow ochre' yarn marked diagonally across two cornered walls. Its shadow duplicates and pulsates the single bright line. Also installed is a sculpture of black and maroon threads which cross a corner in parallel lines interplaying with the surrounding architecture. The intentional use of yarn in Sandback's sculptures provides a soft and matte contour that resides in the space distinctly and discreetly. While inherently simple and succinct, Sandback's work bears a dependency on the fibre itself which is mirrored in the accompanying works by Barrow and Laskey.

Ruth Laskey has been crafting tapestries using a weaver's loom since leaving the California College of the Arts in 2005, after growing unhappy with the restrictive process of painting. By learning the method of weaving, Laskey embraces a direct involvement with her entire practice: she hand-dyes her own yarn, then interweaves it into the underlying geometric structure of the linen. The graduating colours in the exhibited ‘Twill' series toy with our perception and present the conscious result of a meticulous study of the threaded medium.

Mark Barrow's labour intensive works draw a parallel with Laskey's in their method which encompasses the entire structural fabrication. Barrow paints onto linen hand-woven by his wife Sarah Parke, to create collaborative works featuring abstract inter-planar blocks of colour. As the planes of pigment cross each other, the flecks and intonations of the thread are exposed and adapt as we shift our gaze. Barrow titles his works according to the colour and composition in just a few letters such as in ‘YMCK8'. Similarly, Laskey titles her works accordingly with the series and dye intonations. While each artist avoids a lyrical title, there is an inherent lyricism in the final outcome which speaks outwardly on the history of the use of the tapestry in art.

Each artist in the exhibition engages with the medium of thread in a variety of ways and yet shares a common focus of elevating this simple and multifaceted material through the manipulation of its natural qualities. ‘Threaded Stories' offers a timely exploration into the rising and divergent use of thread in contemporary art and provides unique insight into the parallels of these divergent artists.