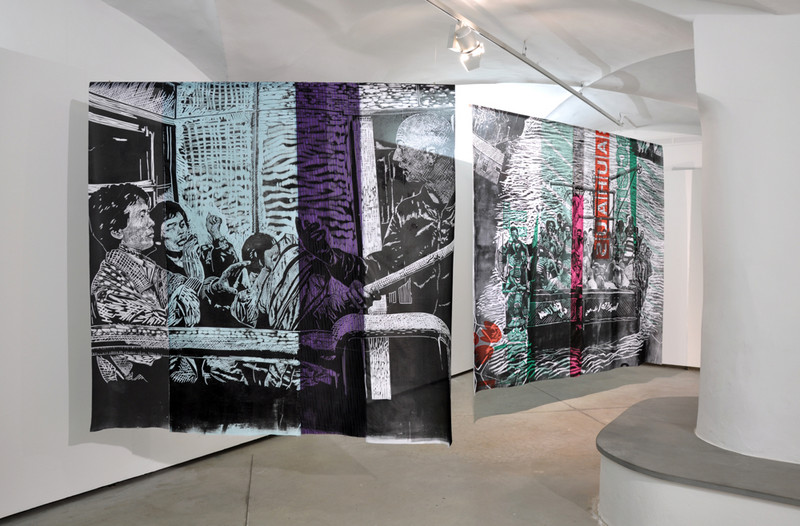 Contemporary art as a platform to explore contemporary social and political issues: the new CCC Strozzina exhibition (23 September 2011—22 January 2012) presents the diverse artworks of twelve international contemporary artists. Their works put together through this exhibition create a reflection on the values, contradictions and paradoxes that typify today’s society. The show further addresses the possible declinations of the principles of democracy, which recently is being challenged more and more.

The exhibition Declining Democracy proposes a critical reflection on the concept of democracy. Through works by international contemporary artists, the exhibition explores the contradictions and paradoxes of democracy, and its changing nature in our troubled world. They provide a reflection on the values and the inconsistencies that typify today’s society. They investigate such themes as the clash between the individual and the community, the growing gap between the man in the street and the political classes, the power and influence of economic lobbies and of the mass media, and the problem of immigration and the sharing or refusal of civic and political rights. At the same time, they explore the possible forms of democratic participation enabled by innovations in communication technologies, which have given people new tools with which to share opinions. This has led to a new interpretation of the notion of political and social participation and of the principle of the right to an opinion.

The word “democracy” is often held to be synonymous with an open and modern society. Yet the concept has within its core a very close tie with the development of capitalism and a series of inconsistencies regarding the notions of the individual and the community, freedom, and participation. The social and political ideal of democracy, thought to be so stable that it embodied “the end of history”, should be interpreted as a process of ongoing negotiation. It is in fact a complex, intrinsically imperfect concept that has been subject to change throughout its history.

In keeping with the CCCS’s mission to reflect events in contemporary society, Declining Democracy aims to create a platform for critical reflection and debate, without seeking once-and-for-all answers or definitive solutions.

Declining Democracy is a project devised by CCCS with the scholarly contribution of Piroschka Dossi (curator and author), Gerald Nestler (researcher and artist), Christiane Feser (curator and artist) and Franziska Nori (director of the CCCS).
www.strozzina.org