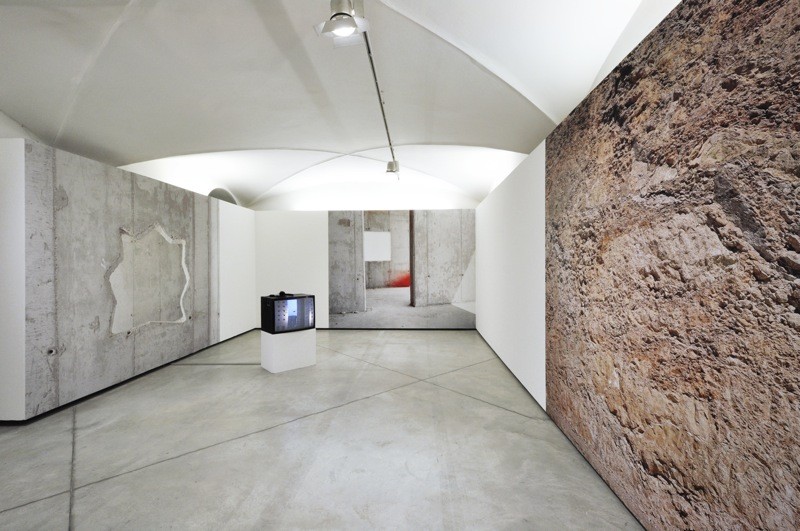 Unstable Territory. Borders and identity in contemporary art, curated by Walter Guadagnini and Franziska Nori, showcases work by international artists which will encourage visitors to reconsider the notion of territory in a contemporary world. Whilst the latter is increasingly characterised by the obsolescence of such concepts as the nation state and borders, there is, at the same time, a return to new forms of nationalism and renewed interest in the individual in relation to a specific area or community.

The astonishing development of mobility for both people and goods, the digitisation of communication and knowledge, migration and an increasingly global economy have all radically changed people’s perception of territories, borders and boundaries. In view of the instability of these concepts crucial to the definition of personal identity, two different –though not necessarily conflicting – trends appear to be taking shape: one based on seeking shelter in the safety and proximity of the micro-territory, the region or even the family; the other, as theorised by sociologist Ulrich Beck, involving a new conception of cosmopolitanism in its most democratic and egalitarian sense.

What does it mean when we talk about “territory” today? The term does not simply refer to a geographical or spatial area, it also refers to a concept of social and cultural belonging and extends into the personal, psychological and mental sphere. The works in this exhibition reflect different approaches, lifestyles and ways of perceiving the unstable relationship between identity, territory and borders in an age of great expectations (and illusions) regarding a borderless society, a shared global territory. Photographs, videos and installations spark reflections on the notion of the border as discovery or barrier, on the hybridisation between cosmopolitism and territorial claims, on the figure of the artist himself as traveller, nomad or experimenter teetering on the edge of physical and symbolic territories.

Artists Paulo Nazareth (Brazil, 1977) and Sigalit Landau (Israel, 1969) focus their research on their own body and its relationship with territories, borders and boundaries. The heterogeneous work of Nazareth, a man who has explored many corners of the world at great length and on foot, from Brazil to the United States and as far afield as India, discloses a reflection on his figure as a nomadic artist playing with, and discovering, his multi-ethnic identity through performances, linguistic misunderstandings and ironic encounters with different people and places. Sigalit Landau, on the other hand, has submitted two performances, entitled DeadSee and Barbed Hula, reflecting on the theme of the physical and symbolic boundary and on the juxtaposition between life and death, the achievement and loss of identity. The first performance focuses on the creation of an intriguing spiral comprising her own body and a seemingly endless number of watermelons floating on the Dead Sea, while the second shows her naked body spinning a hula hoop made of barbed wire on a beach in Tel Aviv.

Marked by his own life story played out between Algeria and the Paris suburbs, Kader Attia (France, 1970) explores the contradictions and complexities in the relationship between global East and West, North and South, in a search through installations and works of art that invite reflection on the notion of the re-appropriation of culture and identity. For this exhibition Attia presents a new installation which will engage visitors in tight paths made of fragments of mirrors, sparking reflection on the relationship between external space and identity, physical and psychological territories.

Addressing a highly topical theme for Italy, the exhibition presents a video entitled The Right of Passage by Oliver Ressler (Austria, 1970) and Zanny Begg (Australia, 1972) which tackles the issue of citizenship rights and national identity, dwelling on the main legal tool for travel and sojourn: the passport. Interviews with people from all walks of life and with migration experts are interspersed with animated sequences prompting a reflection on the difficulty, or indeed the impossibility, of winning the basic political rights that determine each individual’s life in a society.

Exposing the inconsistencies of a financial globalisation process based on transcending (or circumventing) the concept of nationhood at the legal and economic levels, Paolo Cirio (Italy, 1979) presents a project entitled Loophole for All merging digital hacking with artistic action. Playing on the tax “loopholes” legally recognised by Cayman Islands legislation, Cirio has created an online platform selling, for only 99 cents, certificates attesting a stake in real companies registered in this notorious tax haven. His aim is to make tax evasion legal and possible for all, not only for famous hedge funds and multinational corporations.

Adam Broomberg and Oliver Chanarin (South Africa, 1970; United Kingdom, 1971) present a new stage in their Chicago project, a video and photographic installation of a non-place, a territory both real and unreal: the ersatz Arab township of Chicago built by the Israeli Army in the Negev Desert in Palestine so that it can conduct simulations and exercises involving military action and control of the Arab population.

The works submitted by The Cool Couple (Niccolò Benetton and Simone Santilli, Italy, 1986 and 1987) and Jo Ractliffe (South Africa, 1961) also lie in the furrow of a reflection on the status of photography as a record of contradictory territories. The Italian team presents a new production focusing on a border area, the Carnia region in Friuli Venezia Giulia, and on a historical event known to few and forgotten by most, namely the enforced presence of the Cossack community in the area in 1944–5. Modern photographs of landscape and archive material trigger a short-circuit in a reflection on the overlap in traditions, languages and customs, and on the traces and the censorship of this cultural contamination. In a series of photographs in black and white entitled As Terras do Fim do Mundo, Ractliffe, on the other hand, proposes a silent and poetic survey of the places that were the theatre of the bloody civil war in Angola, during which national rifts merged with the supranational rationale of the Cold War, leading to a clash between the South African Army and Revolutionary Armed Forces troops despatched from Cuba.

Another reflection on the role of the image in relation to a territory marked by war is offered by Richard Mosse (Ireland, 1980) with his six-channel video-installation entitled The Enclave, the result of a long working trip to the eastern Congo and recently presented at the Irish Pavilion in the Venice Biennale. In a very striking atmosphere, Mosse allows the visitor to explore landscapes of an extraordinary and almost alienating beauty, yet heavily marked by the twenty-year civil war in which over five million people lost their lives. Thanks to a special kind of infrared film developed for military purposes in the 1940s, the green of forests and meadows turns bright red. Troops and destruction become alienating fluorescent elements that combine with a strong sound component to involve the observer in a powerful emotional experience.

The exhibition catalogue (Italian/English) is published by Mandragora and features critical essays by the curators Walter Guadagnini (independent curator) and Franziska Nori (CCCS Director) together with texts by Ulrich Beck (Munich University and London School of Economics) and Francesco Careri (Università di Roma).

Unstable Territory is on view concurrently with The Russian Avant-garde, Siberia and the East at Palazzo Strozzi, 27 September 2013 to 19 January 2014. Curated by John Bowlt, Nicoletta Misler, Evgenia Petrova, it represents the first international exhibition to examine the fundamental importance of the Oriental and Eurasian connection to Russian Modernism, and follows the destinies of Russia’s self-proclaimed “Barbarians” in their search for new sources of artistic inspiration.
www.strozzina.org