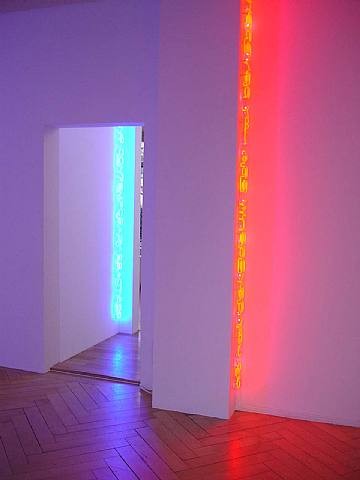 The Gallery Susanna Kulli is showing Maurizio Nannucci “Neon-Text” from the "Anthology 1967/ 2009... “, a collection of single-line sentences, which the artist writes and complements continously in a work in progress since the middle of the 60s.

A poetical basic gives the "Anthology 1967/2009...“ a suggestive colouring and the multiplicity of most different statements causes its linguistic richness. The collection of texts contains simple statements and laconic declarations, just like negations of general sentences, tautologies or direct appeals and requests to the viewer.

The combination of language, sign, meaning, color, light and space forms the basis of the installation "Neon-Texts“, created for the Gallery Susanna Kulli. By dissolving the borders of the gallery's exhibition space, Nannucci includes in his exhibition concept also the office, the storage and the hallway, spreading out a multicolored shining parcours of vertically installed typefaces. The context-referred installation of the neon writings and the interpretation of the meaning court of the individual texts, just like their entity, allow the viewer a meditative inner dialogue and a language bound color seeing.

Maurizio Nannucci (born 1939 in Florence) is among the internationally well-known artists of the present, who prepared the ground for neon art.

In the early 60s Nannucci began taking part in the tendencies of experimental art (Concrete Poetry, Fluxus, Minimal Art, Conceptual Art...) and developed his own artistic concept and repertoire. He dedicates himself to the investigation of the interrelations of writing, language and meaning, of color, light and space, by using a wide spectrum of media and materials (photography, video, sound, neon lights, artist's books, multiples & editions).

Maurizio Nannucci uses language in its ambiguity and writing in its concrete plasticity. In the early sixties, he examined concrete language structures and made them visible and audible with visual and acoustic means of communication. In the year 1964, he developed the first minimal typed, square language images “Dattilogrammi “(1964/1965), from which each subjective gesture is eliminated. The following works “M40 “and “eagle “ (1967) are based on this standard model.

In 1967, the artist was using blue colored neon light for the first time, for a text: “Alfabetofonetico“. He produced the neon-works "Blue and red“, “Corner”, “Red line“, “Colours“, and “The missing poem is the poem” (1968/1969). The fluorescent writings form a first set of neon works, which Maurizio Nannucci extends from 1979 on to neon installations, integrating color and light, space and object.

Since the beginning of the 90s, installed neon texts step into the foreground from the wide spectrum of his work in public space. These neon writings with an extended field of meanings infiltrate the banal sign language of the commerce of urban centers with the language pictures of the artist like “Let's talk about art, maybe...”, Edinburgh; “Nice Nice”, Nice; “All art has been contemporary”, Turin; “You can imagine the opposite”, Lenbachaus Munich; “Art” Carpenter Center, Harvard University; “From north to south, from east to west “, Airport Basel; “Polifonia” Auditorium Rome; “All art has been contemporary”, Altes Museum, Schlossplatz Berlin; “Von so weit her...” Elbbrücke, Magdeburg.

In co-operation with the architects Renzo Piano, Massimiliano Fuksas, Mario Botta, Stefan Braunfels, Auer & Weber and Thomas Müller, Maurizio Nannucci realized projects for permanent neon installations, permeating the space lines of the interiors with color, light and language and exploring architecture as a resonance space for art. Maurizio Nannucci took part several times at the biennials of Venice, Sao Paulo, Sydney, Istanbul and at Documenta in Kassel. His works were shown in around 300 exhibitions in museums and galleries.
www.susannakulli.ch