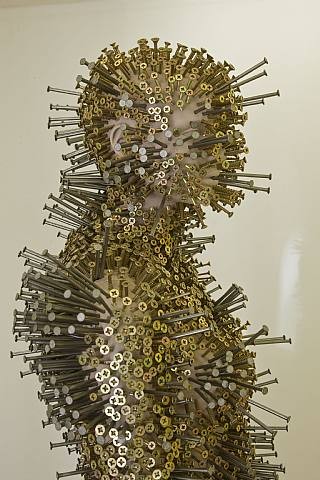 OLIVIER MOSSET AND THOMAS HIRSCHHORN
no 5

Olivier Mosset’s Wallpaper no 5 was created in 2006 as part of the series Wallpapers by Artists. The yellow monochrome floods the wall, at once inviting intervention: “I am not interested in the pictures themselves but in what they trigger,” Mosset says.

This ambivalence—an object in its own right is also a work surface—is similarly thematic in Thomas Hirschhorn’s The Subjecter. Tortured by countless nails, the mannequin stands on its pedestal. Thomas Hirschhorn says about this piece: “I was always interested by surface, by the contact with surface. The impact is always on the surface. The impact has to touch the surface.”

The sculpture was shown at Madrid’s Casa Encendida in 2009. In the accompanying catalogue, Ignacio Cabrero describes the mannequin’s function as follows: “To Thomas Hirschhorn’s mind, mannequins are a ‘headless’ variant of the other. But also a surface onto which the artist can project himself.”

The Madrid show for the first time featured all display-case sculptures in which Hirschhorn used mannequins. The booths represent public spaces, Cabrero writes, since a display case is by itself already a public space, The Subjecter, however, remains a singular sculpture in that it is conceived without such a shell.

“The mannequins—when I made them—wanted to be the poor, contemporary, amoral, non-religious version of somebody or something who endures in place of another, a kind of fetish, which is in African culture an object charged with a supernatural power, either favourable or evil. [...] Other references are also possible—in fact—I always try to be precise and at the same to create an opening in my work,” Hirschhorn says.

You are cordially invited to join us for Zurich’s Open House Weekend before this year’s
Art Basel:
Saturday and Sunday, June 12 and 13, 2010, 11am – 5pm
www.susannakulli.ch