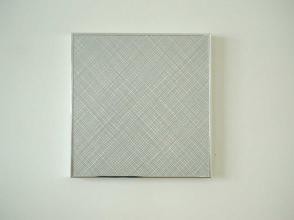 The line – it is often the element of artistic creation with which the genesis of a work begins.
And so a rich variety of arrangements of parallel lines are at the focus of the current exhibition at Galerie Susanna Kulli.
Beginning with a look back at the most reductive approach conceivable, as demonstrated by John M Armleder in his “Untitled” (1987), which simply shows two parallel graphite lines on brown paper, Galerie Susanna Kulli presents a survey of works created by the gallery’s artists that examine the parallel line as such.
A line can be drawn from there across the vibrant colors that define the positions of JeanLuc Manz and Gerwald Rockenschaub to the young artist Shila Khatami; the particular characteristic of her work is the dialogue between gesture and geometry. Khatami uses the prefabricated parallel lines of perforated fiberboard panels as a raster on which she draws her own lines using a black touch-up pen (“Hier!”, 2010). In “Parallel Lines II” (2011), by contrast, the raw material is a record cover she modifies, adding a minimal set of lines. Even in Thomas Hirschhorn’s “Lay Out (B18)” (1990–1993), finally, parallel lines function as essential components of the order of arrangement he defines.
Works that differ radically with regard to the artistic attitudes that give rise to them, that is to say, may be considered in conjunction under the aspect of the parallel line. Whether the support material is paper, canvas, cardboard, or Alucore: in a rich store of artistic approaches, the matrix of the parallel line as a basic structure implies complex forms of correspondence.