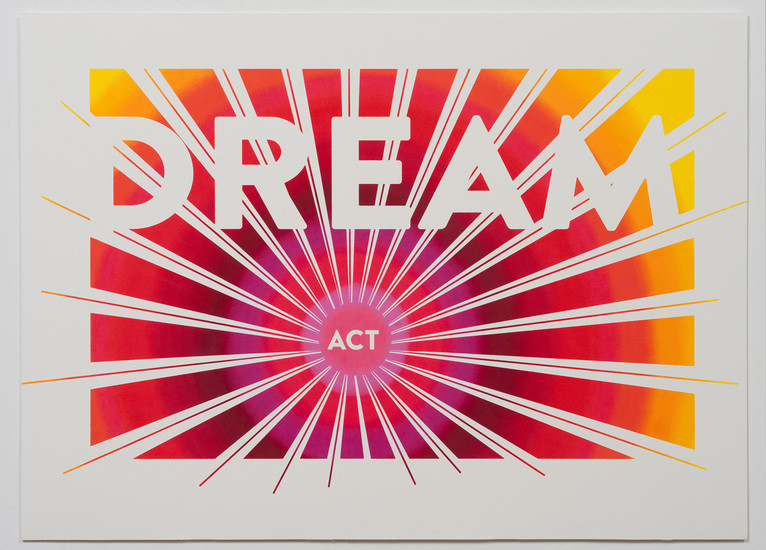 “Big Bill” William D. Haywood, who founded the Industrial Workers of the World and organized some of the most important labor battles in the early the 20th century, closed all of his letters with the salutation “Help the Work Along”. Andrea Bowers’ new body of work is a Feminist-centric celebration of workers’ rights movements, highlighting nonhierarchical labor organizing strategies and the use of craft, artistry, and pageantry as valuable political tools. This show continues Bowers’ investigation of the intertwined relationships between feminism, immigration, and workers’ rights. By juxtaposing workers’ rights graphics from the early 1900s with contemporary political graphic campaigns, Bowers is asking us to evaluate our notions of emancipatory progress. The suffering and exploitation of workers is not an historic event; it is happening on a daily basis in our own city.

The centerpieces of the exhibition, three large drawings each 13 feet tall, revive political graphics from the early 1900s that include representations of powerful women. The source imagery for these drawings come from: a May Day illustration by Walter Crane published on the cover of “The Comrade”, c. 1902; the cover of the sheet music for “Internationale”, a song written in 1872 that became the anthem for radical movements throughout the world; and the cover of Emma Goldman’s journal Mother Earth, the 1908 volume titled “A Menace to Liberty”. Bowers’ drawings are made from collaged found cardboard and sharpie markers. The material choices were inspired by a recent essay written by Gregory Scholette in which he states: “Meanwhile, Zuccotti Park and other OWS encampments revealed a mix of high-tech digital media and handmade signs, a mix of the archaic and the new as if beneath the Internet there is cardboard.”

A large interactive sculpture runs the span of the installation. This artwork is modeled on the activist activity of tabling, a method of reaching a large number of people by setting up an information table in a busy area or at an event. In the exhibition, tables line end-to-end and contain fliers and brochures collected from Los Angeles-based workers’ rights organizations. These pamphlets may be collected and read by the visitors to the exhibition. The sculpture also begins to archive the vast and often hidden amount of local workers support groups, revealing the scarce resources available to those working on issues of such vital importance. One of each of the brochures, fliers, and pamphlets is bound together in a hand-made book. Activating the sculpture, a series of flyer making parties will occur throughout the exhibition, organized by the newly formed Art Union. They will be holding socials where artists, labor organizers, and the community can meet and exchange skills related to graphic design, public performances, and other ways to use aesthetics as a tool for organizing.